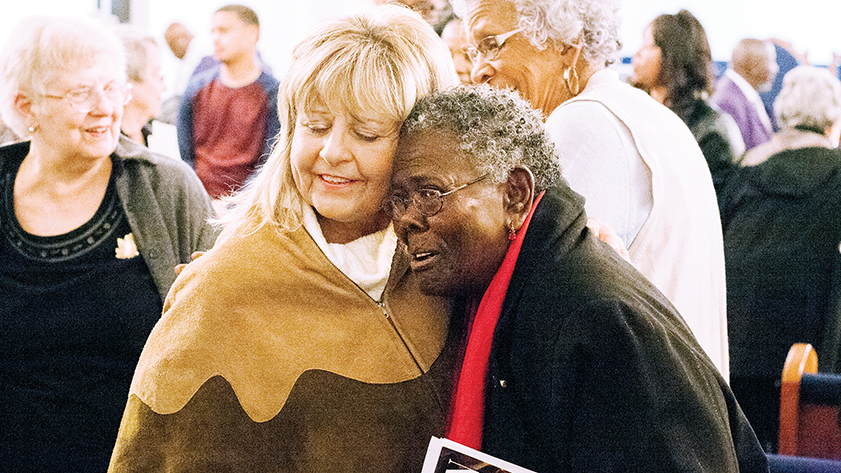 Daily Leader file photo Lincoln Countians who want to show unity in faith — regardless of skin color, denominational differences or other reasons people self-segregate — have the opportunity to gather for a Mission Mississippi Thanksgiving service Sunday at 6 p.m. at First United Methodist Church in Brookhaven. Pictured are, from left, T. A. Boyd and Gertrude Hamilton at last year’s Mission Mississippi Thanksgiving service.

The mission is as simple as it is hard — bring people together across racial and denominational divides. Decades after segregation in Mississippi officially ended, neighborhoods and churches are still heavily divided along racial lines. Mission Mississippi is one group that works to bridge that divide by encouraging people to fellowship together.

“If you’re a Christian, it shouldn’t make any difference,” Phyllis Spearman said. “It says in the Bible there’s no difference — whether you’re Greek, whether you’re a slave or free. We’re supposed to love each other. I don’t see any other interpretation. I read it and I believed it.”

Spearman is a retired Spanish teacher. She remembers the realities of racism and segregation in the 1960s. When, in 1993, Mission Mississippi was founded, the cause resonated with her. At first, she supported the organization financially, but she was ultimately moved to bring the mission to Brookhaven. Currently, she co-leads the group in Brookhaven along with Gwen Smith.

Every year, the group will host a Thanksgiving service at one of the local churches. It isn’t the same church every year — there is not standard meeting place for the Mission. They will alternate between black churches and white churches, and they cross denominational lines as well. This year, the service will be Sunday at First United Methodist Church at 6 p.m.

“When we have an event,” Smith said. “The turnout is really good.”

Smith, the other co-leader of Mission Mississippi Brookhaven, joined the organization a few years ago. She didn’t remember who invited her to an event that year, but it’s the experience that mattered most.

“I met some really nice and interesting people,” she said. “It’s changing aspects about myself and my faith. And we have the Episcopalians. We have the Catholics. We have the Methodists. We have the Baptists. To me, it was like our country. Our country is a melting pot, with a blend of different people and different religions… The body of Christ is supposed to have unity.”

Usually, the group will schedule a group to sing at the event, but this year, Spearmen said they wanted to do something a little different.

“We’re trying to get together a community choir,” she said. “Christian Scott, who used to be the director of music activities at Co-Lin is going to direct. We’ll just have one rehearsal which will be the day of the program.”

That rehearsal will begin at 4:30 p.m. Sunday, and anyone is welcome to attend. Rev. Eddie Spencer of Galloway Methodist Church will speak at the event, and a special collection will be taken up for the Brookhaven and Lincoln County Blessings in a Backpack program, which provides food weekly for over 250 children in the county.