The Mississippi lottery has arrived 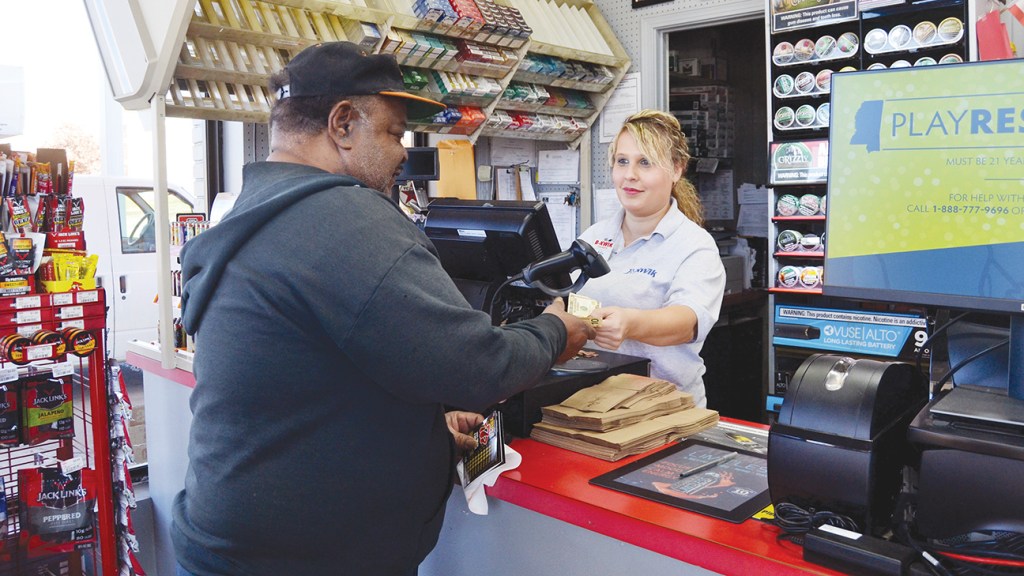 Photo by Aaron Paden Willie Sidney purchases a lottery ticket Monday from Ashley Etheridge at the Texaco station at the corner of Union Church Road and Hwy. 51.

Ashley Ethridge, a cashier at a Texaco station, said customers had been coming in since 6 a.m. to purchase the tickets.

“They’re all excited about it,” she said.

The lottery was approved in Mississippi in the 2018 legislative session. For years, Lincoln County residents who wanted to purchase lottery tickets could make the trip to Louisiana to spend their money.

Money raised from the lottery will go toward road maintenance, infrastructure and education.

“It feels great. Finally, it becomes a reality. And it just goes to show you what happens if you don’t give up,” District 69 Rep. Alyce Clarke, R-Hinds, said. “Sometimes you have to try and try and try again.”

Clarke pushed hard for the legislation, and she purchased the first ticket from RaceWay in south Jackson Monday morning. Clarke was surrounded by Mississippi Lottery Corporation board members and employees, Sweet Potato Queens, an Elvis Presley tribute artist and other elected officials when she made her purchase.

“I am extremely proud of MLC President Tom Shaheen and his staff at the lottery,” said Mike McGrevey, chairman of the MLC Board. “In a short period of time, he and his team have created something truly amazing. I have watched them meticulously work through hundreds of action items.

“They created the organization from the ground up in less than six months,” he said. “This is not only a monumental day for the MLC, but it is also an incredible day for Mississippi. Legislative members determined net proceeds from the lottery will go toward infrastructure and education needs, which are both extremely important to Mississippians.”

Right now, people can play four different types of games, and the Mississippi Lottery Corporation plans to introduce new games in the coming weeks. On Jan. 30, tickets for both Mega Millions and Powerball will go on sale. Winners can remain anonymous.

The lottery promises to bring a lot of money to Mississippi. By 7 a.m. Monday morning, the state had already made $300,000 from is share of ticket sales, according to MLC spokeswoman Meg Annison.