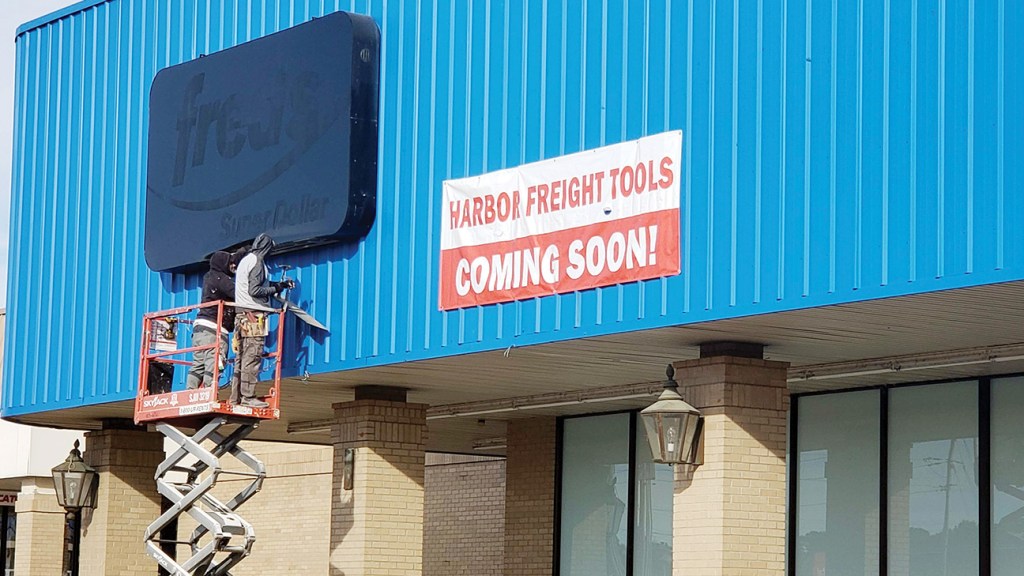 Photo by Donna Campbell Crews worked Tuesday to take down the sign in front of the Fred’s building on Brookway Boulevard. Harbor Freight Tools expects to open in that location in February.

A California-based discount tool and equipment retailer is accepting applications for a service team to work in Brookhaven.

The marketing department at the retail chain’s Calabasas headquarters said the company is tentatively scheduled to open in February at the Fred’s Super Store building on Brookway Boulevard.

“We welcome them to Brookhaven,” said Mayor Joe Cox. “We’re glad to have them. We are glad they were able to utilize an existing building and look forward to them being open.”

“I’m proud that we’re getting a new retail business in Brookhaven,” said Supervisor Eddie Brown, whose district 4 includes that area.

The business plans to hire approximately 35 to 40 people. To view jobs or apply, visit www.harborfreightjobs.com.

Currently, the company is looking for supervisors, managers and associates in sales and stocking.

“That sounds good,” Brown said. “I love to see any business can come in and hire that many. That means lower unemployment rates in the county. That’s a plus.”

Fred’s announced in April it would close 159 underperforming stores — including the downtown location in Brookhaven — by the end of May.

In May, the retailer announced the Brookway Boulevard location would also close, citing an “ongoing effort to rationalize its store footprint.”

Brown is happy to see activity resuming in that spot.

“Vacant buildings don’t make nothing. They’re not good for the community,” he said.  “When somebody comes into town looking and they see a bunch of vacant buildings, it’s not good. You want buildings that’s got people in it. They consider the town growing when they see the full buildings. We want to keep them that way. It’s just good all around for all businesses that way.”

Harbor Freight Tools is a privately held discount tool and equipment retailer, which operates a chain of retail stores, as well as a mail-order and e-commerce business. The company employs over 20,000 people in the United States and has over 1,000 stores in 48 states. It started in 1977 as a small family-owned business.

Lincoln County Economic Development Director Garrick Combs said it was “great that we have a new retailer coming to town.”

Combs met with the Lincoln County Board of Supervisors Monday and the Brookhaven Board of Aldermen Tuesday to discuss economic development in executive sessions.

Brown could not repeat names mentioned in the closed-door meeting with Combs but said his news was encouraging.

“We’ve still got some nibbles on larger industries coming in here,” Brown said. “He’s still working with them and answering their questions. We’re hoping after the first of the year some more of that will move forward. His conversation was positive toward some more development.”