‘Wrap Up Christmas’ and help others, too, with KDMC Foundation fundraiser 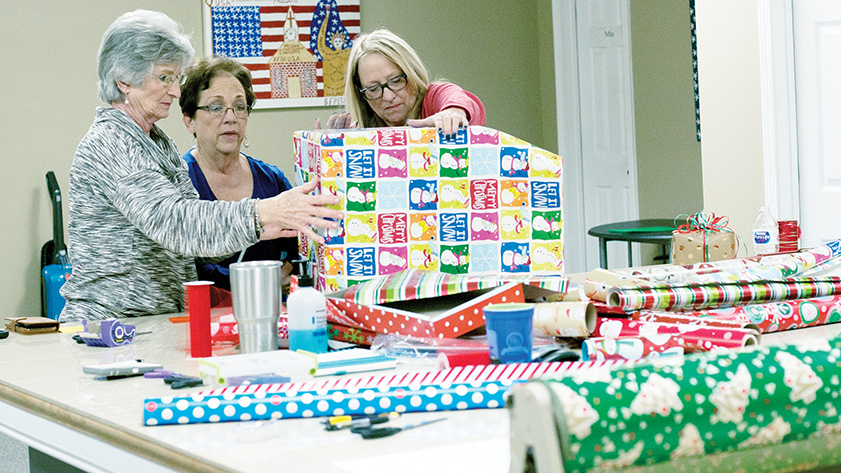 Daily Leader file photo King’s Daughters Medical Center Foundation members Mary Lu Redd, Marianna Knight and Beth Breeland decorate presents at the “Wrap Up Christmas” fundraiser last year. The fundraiser was such a hit, organizers are bumping it up to four days this year, starting Wednesday. All presents are wrapped for $1 each.

Anyone who needs help getting their Christmas presents wrapped can drop them off at the foundation office at 418 Hwy. 51 North — across from Wand Feed Store — and pay $1 per item to have the present neatly wrapped and ribboned by foundation members and volunteers from the hospital.

Wrappers will be on hand Wednesday and Thursday from 1-6 p.m. and again Dec. 18 and 19 at the same time.

“Last year, the first day got a little momentum going then the second day it was a lot busier, so much so that we decided this year to do it four days instead of two days and start a week earlier,” said Foundation Director Jeff Richardson. “Last year, the idea was to catch the last minute Christmas shopper who probably doesn’t have time to wrap presents. This year we decided since it was so popular we’d start it a week earlier. For anybody who wants to save time, come get your gifts wrapped.”

Richardson is thankful he won’t be wrapping alone.

“Luckily, we’ve got a great team,” he said. “We’ll have board members from the KDMC Foundation board, and we’ll also have some of our hospital employees who will be over here volunteering. We’ll have a big crowd. We’ll have a nice little assembly line going around our worktables here in our offices.”

Bring gifts to drop off and they’ll tell you the time to pick them up. There is no limit to the number of gifts brought. Each gift wrapped is $1.

They’ll use your paper or theirs. They’ve got quite the assortment of paper suitable for all ages so just make preferences known when gifts are dropped off.

“I think we wrapped everything we could wrap last year. Size didn’t matter,” he said. “It worked out real well last year. I don’t think we had any incidents. Everybody got  back what they brought.”

Donations are also accepted for the KDMC Foundation during the fundraiser.

Money raised last year helped with several projects at KDMC. The foundation placed framed scripture verses throughout the facility, donated seed money to the hospital for upcoming capital projects, provided employee appreciation lunches, renovated the ICU waiting room area and added a bench outside of the Wound Care Center for patients to sit to wait for rides.