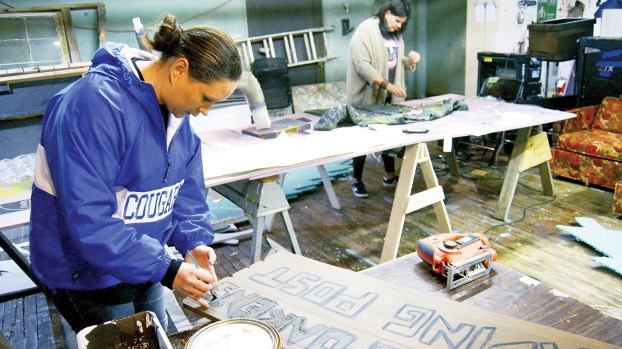 Photo by Donna Campbell Derryn Hamilton paints a sign to be used in a scene in “Disney’s Frozen Jr.,” which begins a two-weekend run Friday. Pictured are, from left: Hamilton and Allison Ott. 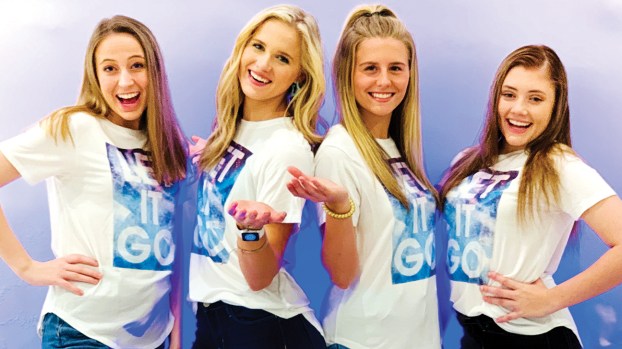 Snow is expected this weekend.

And next weekend, too.

Of course, the snowfall will likely only be inside The Haven for Brookhaven Little Theatre’s production of “Disney’s Frozen Jr.”

BLT brings the magical land of Arendell to life as the musical tells the story of true love and acceptance between sisters Anna and Elsa. When faced with danger, the two discover their hidden potential and the powerful bond of sisterhood.

The production is directed by Tammy Wessman.

Two pairs of actresses portray the sisters — MaryRhea Waterloo and Bailey Pounds are Elsa and Mary Lawrence McKay and Sierra Wessman are Anna.

Josh Brown and Conner Cagle take on the role of Hans.

It was necessary to use two actors for each of the three roles because of the musical demands of the performances. Besides the eight shows for the general public, the cast will perform four times for school-age audiences.

“These are very vocally demanding roles,” Emily Waterloo said. “It also gives more people the opportunity to perform, especially when the talent is so competitive.”

Seats are still available for all eight shows:

Emily Waterloo believes families will enjoy seeing any of these performances together.

“This performance, including intermission, will not exceed an hour and a half, so it’s great for families during the Christmas holidays,” she said. “No. 1, it doesn’t take up your whole day, and No. 2, you can bring anyone of any age and have a great time.”

Besides “Let It Snow,” which Waterloo expects will become “one big magical sing-along,” there are a few new songs not heard in either of the Frozen movies.

Those with tickets are invited to a VIP after-show party in The Haven Studio next to the lobby. The cast will be available for a meet-and-greet immediately after the performance.

“Everybody can bring their cameras and their cell phones and take as many pictures as they want,” she said.

Student rush tickets at $10 each are available an hour before the show with ID.