Local survivor is teaching others how to survive trauma 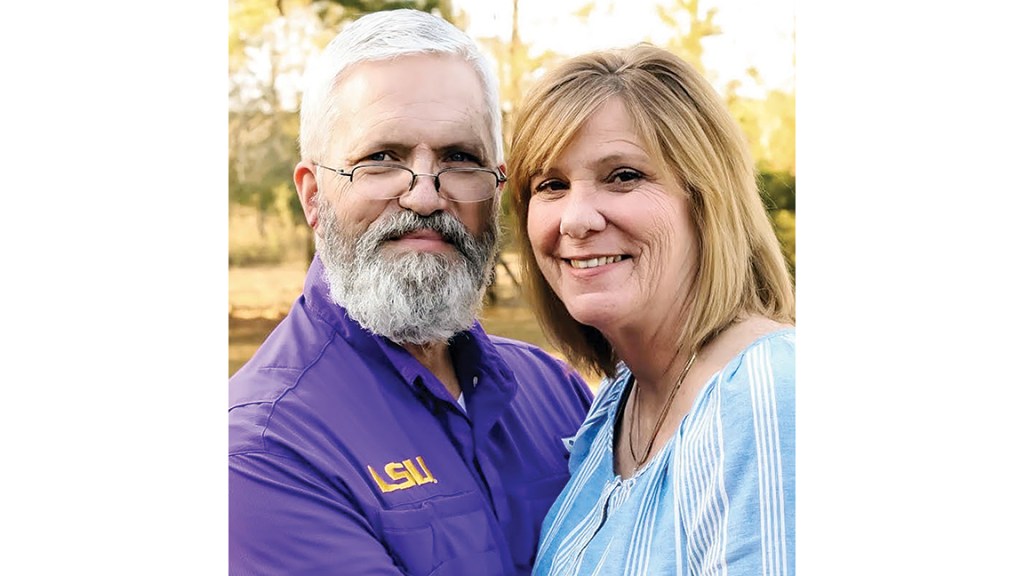 Photo submitted Tommy Alderman, pictured with wife Patti, teaches others how to respond to traumatic events.

Three years after a gruesome dog attack, Tommy Alderman is still telling his story — still using it as an opportunity to teach.

“It’s in my DNA,” Alderman said. “I’m a trainer at heart. I knew immediately after reviewing everything that happened and the reasons why that I had made mistakes and I wanted people to know what those mistakes were so they could avoid them.”

It’s a harrowing tale. Alderman works as project manager for Application Data Systems Incorporated, but he also lives the homesteaders life. He and his wife Patti live on Alderman Farms, where they raise livestock, grow crops and share their experiences with others online.

Three years ago, Alderman was attacked by his livestock guardian dog, a 140 pound Anatolian shepherd named Duke, when he tried to prevent the dog from slaughtering a piglet. Alderman, who is also a retired police officer, has had training in handling crisis situations. He attributes  his survival to his training — and the quick action of his youngest son Cory, who found Alderman’s firearm and shot the animal, putting an end to the attack that left Alderman in the hospital.

Since the attack, Alderman has written a detailed blog post covering the events. Alderman said he wanted to detail his mistakes so that others could learn from them, and he doesn’t shy away from frank discussion about the events leading up to the attack.

“Our research indicated to us that an Anatolian shepherd would be an ideal dog for our purposes. We only researched enough to feed our bias toward what we wanted to hear, and then we stopped,” Alderman said in the blog post. “We did not research dog behavior or body language. We did not research the proper training of (livestock guardian dogs.)”

Since then, Alderman’s educational work has shifted toward surviving trauma. It’s something he has had some experience with through his work in law enforcement, and he has noticed — going to homesteaders conventions and searching online — that there isn’t much material available for civilian use. So he contacted a friend with the Mississippi Law Enforcement Alliance for Peer Support for permission to adapt their material. He got it.

From that material, he compiled “When Trauma Strikes,” a free 14-page PDF detailing possible effects following the aftermath of a critical incident. Alderman stresses that people can experience most, some or none of these effects, and it isn’t an exhaustive list. But his most important message is that all of it is completely normal.

And the effects of trauma can happen to anyone. One deputy responding to Alderman’s attack described him as a “tough old man” to have survived an attack from a 140 pound dog, and he has had training in the past on the possible reactions people can have to critical trauma. That didn’t make him immune to it.

Because of his prior training, Alderman knew that reactions like this were completely normal, and he didn’t dwell on it. For others, Alderman said the experience can leave people questioning themselves and their strength.

And so Alderman has been taking that message to homesteaders conventions around the country. Homesteaders might not have the training of a police officer — they aren’t required to have any safety training at all, according to Alderman — but there are plenty of dangers on a farm that might lead to critical trauma.

Alderman has several stories of how his talks have resonated with people. One woman, noticing that her husband had not returned home at the normal time and hadn’t checked in, began retracing his steps until she found a scene of an accident.

When one trooper informed her that her husband was dead, Alderman said, she sat on the ground and stared blankly into the distance. The troopers walked away, but not so far that the woman couldn’t hear one of them say that she wasn’t acting like someone who had lost her husband, and for years she had to deal with thoughts that she didn’t love her husband enough.

“If I could see him I would probably slap him,” Alderman said. “He should know better. We have a habit as humans to project our idea of how we think we would respond onto someone else. You have no idea how you would respond. You think you do — but you don’t.”

And even after a person thinks they’ve gotten over an event, other outside factors can lead to symptoms after the fact.

“Peoples’ ability to survive a critical stress level is often determined by the levels of cumulative stress they’re dealing with every day.”

Two years after the attack — which Alderman said had been mostly smooth sailing — Alderman experienced several life events, one after another, that led to that critical stress building up. His mother-in-law was under hospice care, he had a family member who was a victim of an assault and work was piling up.

“The next thing I know, I’m thinking I’m having a heart attack. I actually went into the emergency room with chest pains. My blood pressure was skyrocketing.”

It wasn’t a heart attack. His physician, remembering that Alderman had experienced the attack, suggested his symptoms were caused by stress. He’s on medication for that, now, and feeling well, and — always taking the role of the teacher — already planning to add his new experiences to his presentation.

That opportunity, to have experienced life’s hard lessons and have a chance to share it with the world, is something Alderman values a lot.

“I wouldn’t volunteer to do it again,” Alderman said. “Once is enough. But I literally would not erase it if given the power to do so. If I erased what would happen, that woman would still be going through what she was going through. Too many good things have happened.”

“When Trauma Strikes” can be downloaded from www.traumastrikes.org. Alderman encourages everyone to read it.

“I would invite anybody who either has been recently involved in a traumatic event or knows somebody who has or anybody who will (to read the PDF) — and that’s everybody. Everybody’s going to go through it.”

Alderman’s blog post detailing his attack can be found at www.aldermanfarms.net/blog. Alderman said anyone who has experienced trauma and needs someone to talk to or who knows of an organization who would benefit from his presentation can reach out to him at tommy@traumastrikes.org.