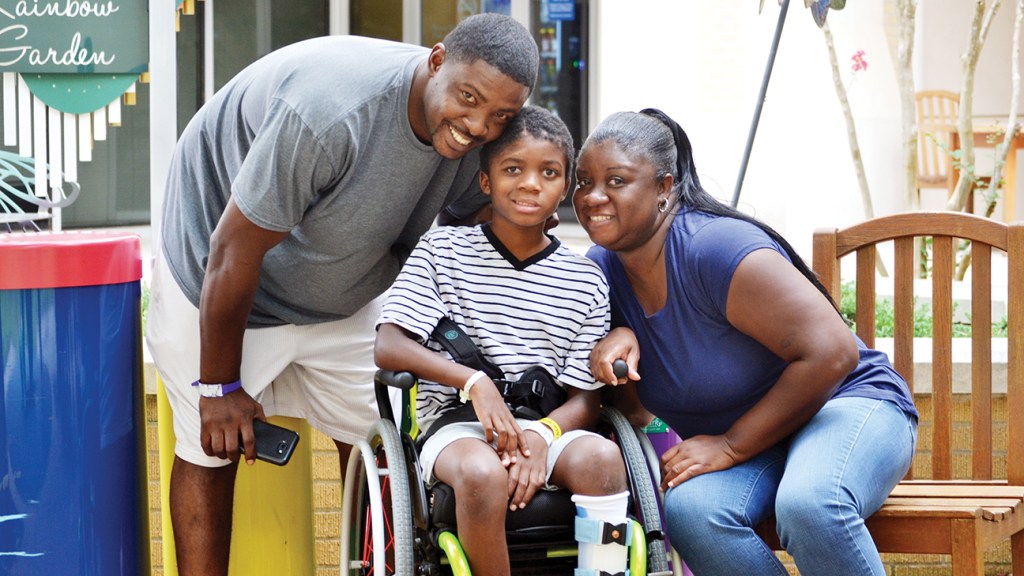 Daily Leader file photo Darrius “Boo” Bass, pictured with his father Derrick Bass and his mother Grace Brice, smiles after one of his earlier surgeries at Batson Children’s Hospital in 2018.

For his 12th birthday Friday, Darrius “Boo” Bass wanted to go swimming in a heated hotel pool in Brookhaven followed by slices of pizza with his buddies.

Instead, he’ll be in Batson Children’s Hospital in Jackson recovering from the surgery he had Wednesday to replace part of his skull with a 3D-printed prosthetic covering.

“That’s all changed. Right now we’re just waiting to hear from the doctor and see what he says and then we’ll go from there,” said his grandmother, Joyce Wright.

The surgery was needed to repair the part of Bass’ skull that was broken when the child was struck in the head by a bullet June 4, 2018.

Bass was playing in his aunt’s yard on Henry Myers Street between East Monticello and East Cherokee streets that afternoon. The driver of a white Ford automobile parked in front of the house was holding a gun and it discharged, the bullet crashing through the windshield and striking Bass on the right side of his head.

Derrick Bass, who was at the hospital with his son’s mother, Grace Brice, said the boy came through surgery and had been awake a few times in the ICU.

During surgery, doctors were able to also able to dislodge the bullet that had remained in the back of the child’s skull.

“They got the bullet out,” Wright said. “I thought it was already out. But they took it out, thank God.”

For the seven months after the shooting, doctors kept part of Bass’ skull refrigerated so when the swelling in his brain went down permanently they’d be able to make his skull whole again. They replaced it during a second surgery in December last year.

“They’d put it in the refrigerator when he’d initially got shot, and they put it back (in December.) Then we noticed that the side that it was on started sinking in, back like it was,” she said.

Doctors made a prosthetic piece and in his third surgery Wednesday, surgeons replaced the boy’s bone skull with it so his brain would be completely protected.

Wright said Bass suffers from short term memory loss and has limited use of his left hand and arm. He drags his left leg. His speech was slurred at first but he’s gotten more control over his words through therapy sessions.

He attends Brookhaven Elementary School and works with a special education instructor and hopes to eventually catch up with his peers.

Bass enjoys the attention he gets from his nurses and therapists at Batson — he’s smiling big on his dad’s Facebook video before the surgery.

“He loves that part, especially the women,” she said.

They fuss over him whenever he visits.

While he loves being the center of attention, he’d rather just be a normal 12-year-old.

“Seeing other kids out there running and playing and doing and he can’t do, that kind of depresses him a little bit,” Wright said.