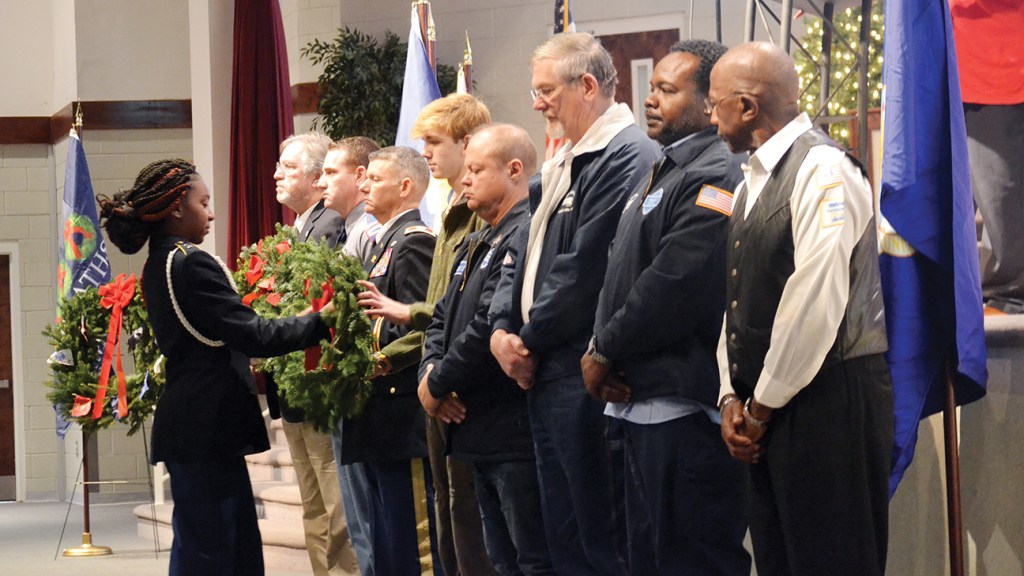 A crowd in the sanctuary at Easthaven Baptist Church Thursday joined similar groups around the nation for a minute of silence to remember the fallen military service members, the prisoners of war and those missing in action and to honor those who served and are serving now.

“Our mission today, soldiers, is to remember the fallen, to honor those who serve and to teach our children the value of freedom,” said Terrance Turner, who organizes the annual Wreaths Across America wreath-passing ceremony. Turner is a Walmart Distribution Center transportation manager who served in the armed forces for six years.

About 500 such ceremonies were taking place nationally and some overseas.

“What makes this ceremony unique is bringing everyone together,” he said. “I know it’s a busy time, but sometimes we have to take time out to recognize the people that made the ultimate sacrifice.”

Brookhaven is a relay point for wreaths that left Maine earlier this week and are headed to their final destination in Houston. Two drivers from Tennessee, both military veterans, ceremoniously passed a pair of wreaths to two Brookhaven drivers, Jerry Buckley and Billy Tingle, also veterans.

Members of the Brookhaven High School JROTC made the exchange of the balsam fir wreaths, taking them from the Tennessee drivers and handing them off to Buckley and Tingle, who will continue the journey escorted by the Patriot Guard and the Mississippi Highway Patrol.

The JROTC also presented four other wreaths during the ceremony.

“In our community, we want our veterans and the families of these officers to know that we appreciate them,” Turner said. “Today we pay tribute to those protectors who have worn the uniform.”

MHP trooper Craig James received a wreath to remember MHP troopers who have died in the line of duty. That wreath will be displayed at an MHP memorial in Jackson.

Col. Craig Weaver with the BHS JROTC accepted a wreath in honor of all service members currently serving.

Eagle Scout Jake Thompson accepted a wreath in memory of Capt. Danny Entrican, a special forces reconnaissance patrol leader from Brookhaven whose team was overwhelmed in a firefight in Vietnam. Entrican was listed as missing in action and then a prisoner of war, Turner said.

Thompson, a sophomore at Brookhaven High School, is completing a beautification project at Entrican’s memorial marker at Railroad Park as part of his Eagle Scout project. The wreath will be placed at Entrican’s marker.

Brief programs will be presented at Riverwood Memorial Park at 11 a.m. and at Wesson Cemetery at 11:30 a.m. prior to the layings of wreaths at graves of fallen veterans.