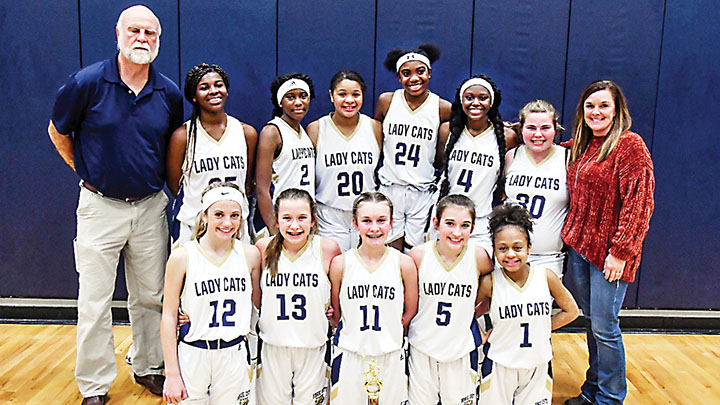 The final day of the Lincoln County junior high girls’ basketball tournament saw a new champion crowned as the Bogue Chitto Lady Bobcats won the title on their home court Thursday night with a 41-14 victory over Enterprise.

In the earlier consolation game Loyd Star slipped past West Lincoln 21-20 in a close game.

The second quarter saw both teams tie up the game several times and then swap the lead. Loyd Star took a slim 10-9 into halftime.

Coming out of halftime West Lincoln looked like a totally different team. Behind their defense and rebounding the Lady Bears created some distance between them and the Lady Hornets.

Loyd Star and coach Gene “Moochie” Britt fought hard to stay in the game as their defense started to lead to baskets that chipped away at West Lincoln’s lead.

West Lincoln and coach Brooks Smith held onto a 20-14 lead going into the final frame of the game before a Lady Hornet comeback in the fourth quarter.

Loyd Star pulled within one point, 21-20, with three minutes left in the game before getting the go-ahead basket.

In the championship game the Lady Bobcats used pressure to overwhelm Enterprise as the young Lady Bobcats took control of the game early and never looked back.

Bogue Chitto got off to a fast start, going up 6-0 before Enterprise could get a basket to fall.

The BC offense and defense didn’t slow down as they took a 19-5 into halftime.

Coming out of halftime, Bogue Chitto kept up the pressure, taking a huge 34-7 lead into the fourth period.

“I am happy for the girls,” said Walters. “We didn’t win a game last year in junior high. The girls worked very hard and we achieved our goal of winning the county tournament. If we can stay together and continue to work, the future is very promising for these young ladies.”