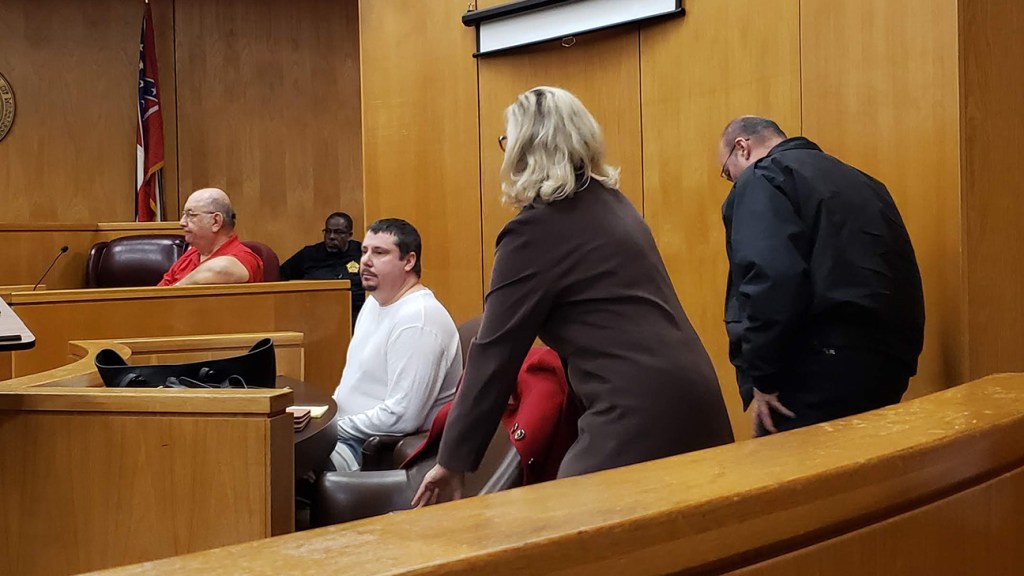 Photo by Donna Campbell Jesse Scott Smith made an appearance in court in Lincoln County Wednesday.

The attorney for a Brookhaven man accused of shooting to death an acquaintance in 2018 wants the State Crime Lab to test gunpowder residue collected from the victim.

Defense attorney Tangi Carter asked for the additional testing Wednesday during a status hearing for Smith.

“They didn’t test it. It’s not their policy to test it but we’re asking them to test it,” she said. “I think it’s relevant. There’s a possibility that he (Bennett) could have shot himself and we’d like to have that tested.”

He also did not object to Carter’s request to have Bennett’s locked iPhone to be sent to the crime lab to have it unlocked. The phone is being held in evidence at the Brookhaven Police Department.

Adams said he is not aware if the crime lab technicians have the ability to unlock a cell phone.

“I’d like to send it up there and see what they say,” Carter said.

Adams did object to Carter’s request to have six video testimonies transcribed. Because Smith is indigent, the state has already approved payment for the defense to hire its own investigator. Adams said he can hear the audio on the video recordings and does not think transcription is necessary.

“I don’t believe the county should pay to have this transcribed,” Adams said.

Carter said she can “muddle through it” but would prefer it be transcribed.

Circuit Judge David Strong may honor Carter’s request because he believes it could expedite the trial if there is a written copy of the statements to use during cross examination.

But he wants to know what the procedure will cost before he will consider it.

“I’m not going to give a blank check,” Strong said.

Carter has requested a reduced bond for her client previously but was denied. This time, she asked if a property bond could be used rather than a cash bond if the $500,000 bond couldn’t be reduced.

She said there is “a lot of various reasonable doubt here” in the case and Smith has been a model prisoner who has reunited with his ex-wife.

Carter said the woman, who was in the courtroom Wednesday, had agreed to allow Smith to do a property bond using her $150,000 home. She and their children live there. Smith plans to live with them if released.

“It puts a stronger burden on him to do the right thing,” she said.

She also suggested that Smith wear an ankle monitor if it would allow him to be out of jail.

“There are eyewitnesses that have expressed fear of Mr. Smith,” Adams said.

Strong said it is up to Lincoln County Sheriff Steve Rushing to decide if he will accept a property bond over a cash bond. As of Thursday afternoon, Smith remained in jail.

Smith’s trial date has been continued four times. It is set for May 19 in Walthall County Courthouse.

Smith was arraigned in September, 2018. He pleaded not guilty.

At a hearing two months later, the court scheduled Smith to stand trial in early February of this year, following all pre-trial motions and the receipt of the state’s final autopsy report. After continuances granted by Strong due to a delay in receiving that report, trial was rescheduled to begin in June of this year. The lack of the ballistics report pushed the trial to August.

Carter argued in January for a change of venue, claiming news of the murder and Smith’s arrest had been published in The Daily Leader and “extensively on social media,” making it “particularly difficult to get a fair trial.”