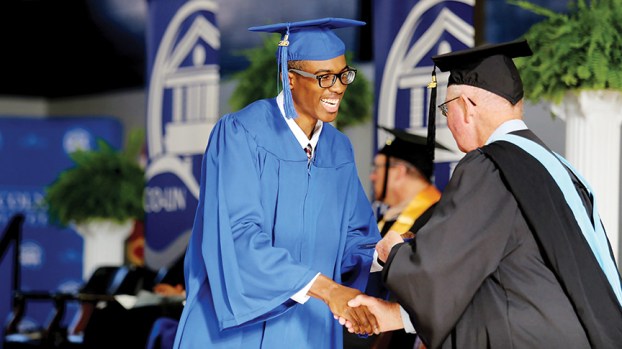 Graduate: ‘I feel like I got the full experience’

Graduates from all three of the college’s campuses participated in the ceremony Wednesday with 117 graduates from the Wesson Campus, 43 from the Natchez Campus, and 23 from the Simpson County Center. That number is up approximately eight percent from the fall 2018 graduating class.

For some students, graduating in the fall gives them an opportunity to jumpstart their coursework at a university by starting in the spring. For others, it’s just the right time to head to the workforce.

“I feel like I got the full experience at Co-Lin and was very involved on campus,” said graduate Jasmine King of Wesson. “I get to move forward in my degree faster since I’m graduating early and I’m really excited about taking the next step at Southern Miss.”

Among the graduates were 25 Wolf Pack football players. Co-Lin continues to be a leader among community colleges in the number of student-athletes that graduate in the fall, with over half of the 25 moving on to colleges and universities across the country to continue their football career. December graduation for community college football players places them in an excellent position to excel at the next level. Practicing in the spring and becoming acclimated to the college/university during the off-season is very desirable to four-year coaching staffs.

“When you look back on your life, you might realize that these have been some of the best years of your life,” Hulon said in closing. “Some students have made lifelong friends here and others may have even met a future spouse here. Regardless of your path, we hope that Co-Lin would hold a special place in your heart.”

Special to The Daily Leader

Insanity plea not likely for Godbolt; suspect accused of killing 8

The capital defense team for Willie Cory Godbolt — the man accused of shooting to death eight people in a... read more