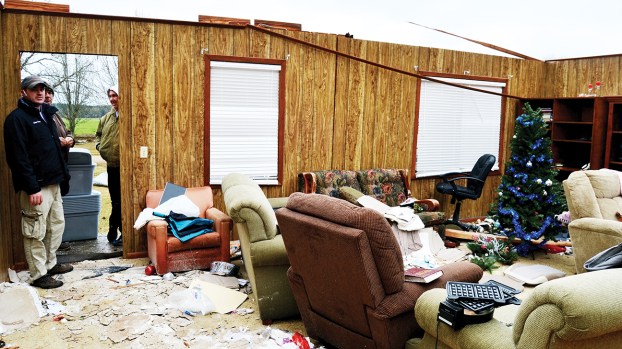 The tornado that damaged homes, churches and property in southwest Lincoln County Monday was classified as an EF-3 by the National Weather Service.

The twister began in Amite before crossing into Lincoln County at the corner where the counties meet with Franklin. The tornado had a path of 30 miles with a maximum width of one-half mile. Maximum winds were 140 mph.

The tornado entered Lincoln at the lower corner of the county, then churned northeast through Auburn and toward Bogue Chitto. Damage was reported on Hwy. 98, Hwy. 569, Bogue Chitto Road, Jackson Liberty, Chisolm, Summit as well as Concord Lane.

The tornado stopped just west of I-55 at Bogue Chitto.

Also, the steeple on Adams United Methodist Church on Jackson Liberty toppled off the 200-year-old building, he said. Several chicken houses on Hwy. 569 were also damaged.

Galey said a driver was rescued Tuesday after he tried to drive through a flooded section of Hog Chain Road near the railroad tracks.

The tornado was one of 10 that impacted the state Monday, with seven of those being an EF-2 or stronger. Officials said some injuries were reported statewide, but no deaths.

About 22 local families will receive financial assistance from the Salvation Army. Brenda Kates, the director of the service center in McComb, distributed gift cards to families Friday at the Lincoln County-Brookhaven Government Complex.

Kates was given a list by the Lincoln County Emergenc Management office. If someone believes they should be included, but has not been contacted by Salvation Army officials, Kates advises them to contact the EMA office in their county.

Kates is thrilled to be able to help.

“It was awesome. Each time the reaction is the same. The devastation these people suffer and go through is just unimaginable,” she said.

There is a sense of relief when she talks to families.

“Most of them cry. They want a hug. They thank the Lord,” she said. “They’re just so thankful that someone is thinking about them and are willing to give them assistance.”

For decades, Patti Perkins has been collecting stuffed bears — but not for herself. She collects them for first responders... read more