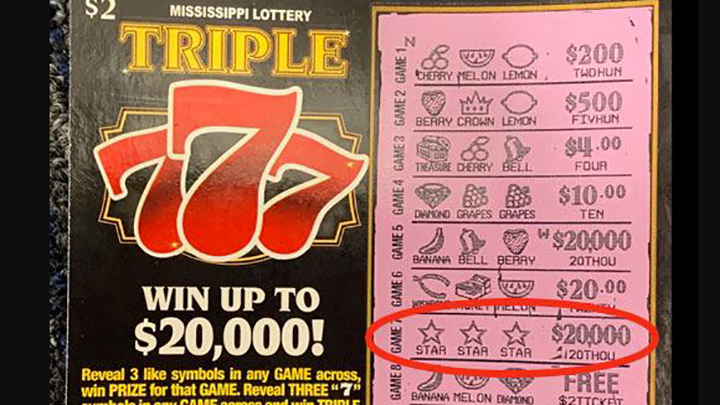 A Brookhaven woman is $20,000 richer after matching three stars in a row on a Triple 7 scratch-off game bought at an area convenience store.

The woman, who chose not to be identified, purchased the $2 ticket Friday from Blue Sky Store No. 401 at Brookway Boulevard and Hwy. 51, according to Meg Anniston, director of communications for the Mississippi Lottery Corporation.

Until Nov. 25, Mississippi was one of only six states without a lottery. The tickets are available in roughly 1,200 convenience stores and other sites across the state.

Lincoln County has 17 active retailers selling the scratch-off tickets, with total sales at $94,500 for the first week and $87,000 for the second week, Anniston said.

Lawrence County has three locations selling scratch-offs, with $11,000 in sales in the first week and $17,700 in the second.

“We do not have store incentives for large jackpot wins in place just yet,” Anniston said. “As we grow and develop, that may be part of the discussion.”

The state had resisted a lottery for years until lawmakers in 2018 authorized a lottery as a way to finance road maintenance and infrastructure needs. At the time, the state had been forced to close hundreds of unsafe bridges.

Right now, people can play several different types of scratch-off games with various costs and prize amounts. On Jan. 30, tickets for both Mega Millions and Powerball will go on sale.