It’s the end of an era for county school district; longtime assistant to retire 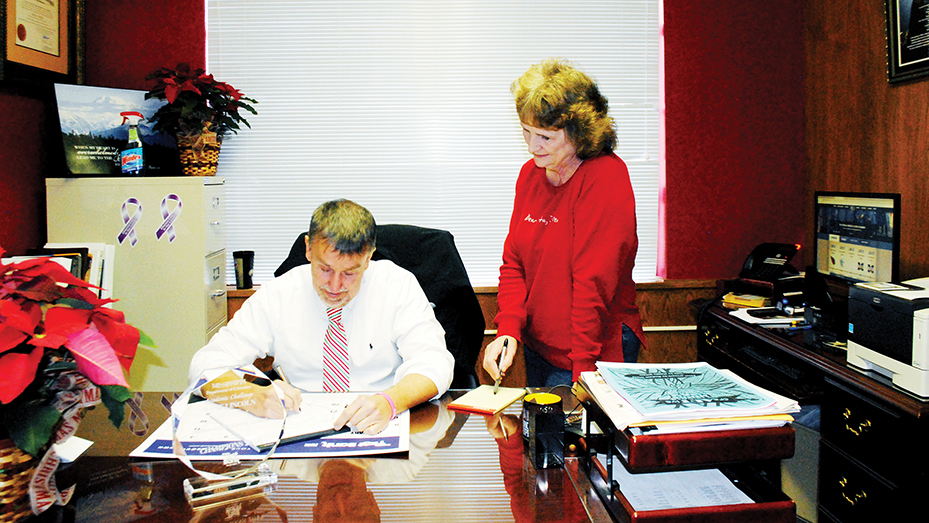 Regina East, a longtime administrative assistant for the Lincoln County School District, is retiring in January. The Board of Trustees voted in its Dec. 17 meeting to approve her resignation, effective Jan. 31.

“It’s a sad note for me and a lot of people in this district,” Superintendent Mickey Myers said.

East is not the only person to retire from the district this year. Special Education Director Letha Presley also retired Oct. 31. Her successor Jeanne Ebey attended the meeting last week to introduce herself.

“I don’t know why everyone’s bailing out on me,” Myers joked at the meeting.

Myers said East is leaving to take care of her mother, and he supports her decision to retire.

“It’s been a tough decision for her, but she came to my office,” he said. “I’ve told many people before, all you have to do is tell me that you’ve made a decision for your family, and I will support you.”

East has 28 years of experience working for Mississippi schools, and has spent the past 22 years in her current post. She has served under four superintendents and said she has seen many friends come and go over the years.

“I’ve enjoyed my job, and it was a hard decision to retire,” East said. “There’s a lot of very special people here, and I’m going to miss all of them.”

Myers said in the meeting that he would soon be advertising for East’s replacement, and East said she would train whoever was hired.

In other business at the Dec. 17 meeting:

The board voted to approve a news release detailing the process of searching for a superintendent.

The Mississippi School Boards Association was contracted to assist in the search. The MSBA posted a brochure outlining qualifications set by the board on Nov. 1, and MSBA Executive Director Mike Waldrop sent an email to contacts on the MSBA mailing list announcing the search.

MSBA is currently reviewing the applications based on the board’s qualifications and Mississippi law. The board emphasized in the release that the board will make the final decision regarding who to appoint for the position.

“The board members will conduct an in-person interview of the applicants they feel best fits the needs and chemistry of our district,” the release said. “Through those interviews, the board will determine which applicant is the best suited to be the next superintendent of Lincoln County School District.”

• Victoria Frye was approved as a certified long-term substitute for Lakan Van Norman for at least 20 days.

• Ashtin Prather was removed from the West Lincoln substitute teacher list, and Jewel Hines was added.

• A donation of leave request was granted.

Training and other expenditures

• Chad Norton of Bogue Chitto and James Addison of West Lincoln were given permission to attend the annual Mississippi athletic administrators conference in Biloxi. The conference will require overnight travel expenses.

• The board approved to pay Perry Brown monthly as board member and for mileage.

• Financial Director Sam Stewart was given permission to attend the MASBO annual conference at the Hilton in Jackson. The conference is $205.00, and the group rate for the room is $130 per night.

• A check to Roger Martin for $25 was approved.

• A contract with Pitney Bowes for a lease on a postage machine for 36 months at $7.59 a month was approved. The contract begins March 30.

•The board approved an increase to Jennifer Elliot’s salary for National Board Certification.

The board went into executive session to consider upholding the hearing officer’s decision on four students.

The board voted to change the next regular scheduled board meeting from Jan. 20 to Jan. 13 due to the Martin Luther King Jr. holiday.