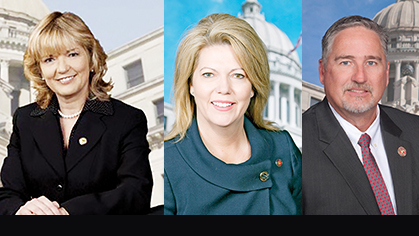 Rep. Becky Currie, Rep. Vince Mangold and Sen. Sally Doty, all Republican incumbents who will be sworn into office next week, plan to focus on education, employment, Medicaid and roads and bridges in 2020, but all agree it’s time community colleges receive their due.

“We spend a lot of money on workforce, but it’s in so many different places, that we don’t know what we’re getting for our money,” said Currie, who represents District 92, which includes Copiah, Lawrence and Lincoln counties. “We want the biggest bang for the buck so we want to make sure that that money, and a good deal of it, will go to our community colleges where our workforce is coming from. They’ve been left out.”

More than 50 workforce programs operated through various agencies in the state receive funding, and many are duplicating efforts, she said.

Doty, who represents District 39, which covers Copiah, Lawrence, Lincoln and Walthall counties, said the agencies are “working hard” on workforce programs and have “good intentions.”

“It’s all spread out so I think we need to make sure that all of our agencies are on the same page,” Doty said.

K-12 schools get about $5,000 per student from the state, while Institutions of Higher Learning gets about $7,000 a student. Community colleges receive about $2,500 per student.

Currie is concerned about the plight of community colleges in the state.

“We’re really asking our community colleges to do more,” Doty said, pointing to dual credit courses for high school students and Career and Technical Education training. “We’re asking them to do a lot and we need to fund them for their programs.”

Currie said only about 15 percent of students in the state graduate from a four-year college, while at the same time, community colleges are “churning them out in two years and they’ve got a good paying job.”

That’s why legislators want to give community colleges a larger slice of the pie.

“It’s past time that we recognize our community colleges and we get them where they need to be,” Currie said.

“We’ve got Co-Lin to the north, and Southwest to the south. We’re in good shape. Our kids here, they’ve got good options.”

Doty would also like to see more money go toward teacher pay raises.

Previously, legislators voted to give teachers a $1,000 pay raise, which accounted for $77 million for salary increases and retirement compensation. The state match for retirement is over 17 percent.

“So, it’s a big chunk of money anytime we do a teacher pay raise,” Doty said.

Each raise is permanent.

“We’ve got to make sure our budget will allow for that. The good news is our budget is in very good shape and our revenues have been above projections this year,” Doty said.

Doty has asked to be placed on the education committee.

“We are really facing a critical teacher shortage in Mississippi,” she said.

Some of the more experienced teachers are retiring, others have left the profession and graduation rates of education majors are decreasing. Doty filed a bill last year that allows teachers to retire and draw retirement benefits, but also continue to teach. It died, but she plans to file it again this session.

“We’ve got support from leadership. They want to see it passed,” she said. “We don’t want to do anything to hurt the retirement system. Certainly, we want to make sure it does not have an adverse impact on our retirement system.”

HOW TO REACH YOUR LEGISLATOR: