Ryan Everett: I always wanted to be sheriff 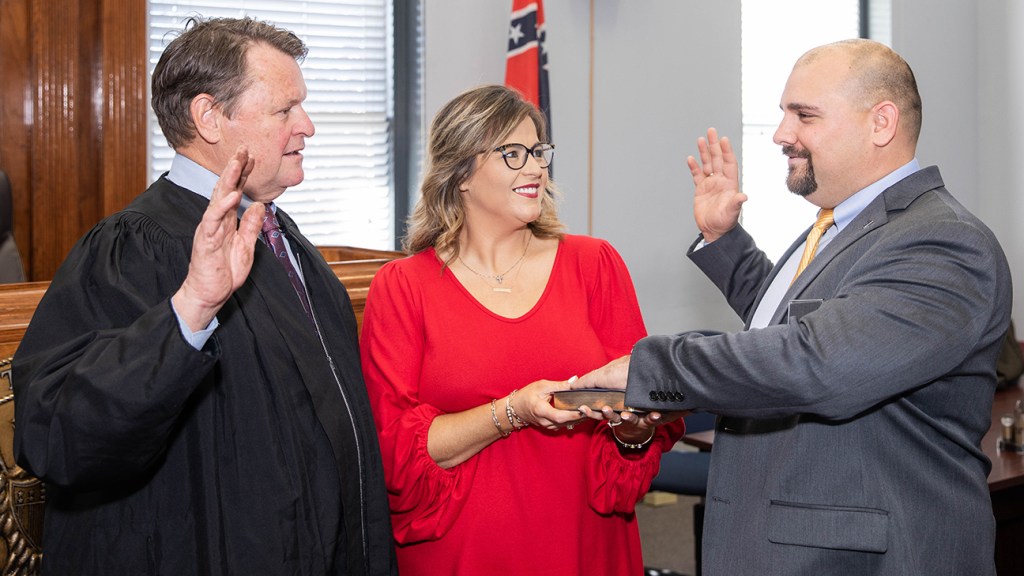 There was a time when a young Ryan Everett wanted to be a veterinarian, even signing up for the college classes to pursue a life chasing animals.

But the man known by the nickname “Hoss” chose a different path that has him chasing criminals instead.

The 37-year old Everett is in his first week as sheriff of Lawrence County. He won the right to wear the badge after defeating eight other candidates including his former boss.

He and his wife Kaylan — married nine years Jan. 13 — are raising two sons and a daughter in the New Hope community, which is nestled between Monticello and Jayess in Lawrence County. Everett was raised in Topeka, and except for a four-year stint in Wesson, Lawrence County has been his home.

Everett finished high school and went to Copiah-Lincoln Community College, hoping to take the first courses he needed to earn a vet’s degree. His mother held out hope he’d be a history teacher, but a chance meeting with the late Joel Thames, who was sheriff at the time, led to his first jobs in law enforcement. Everett, at 19, worked part time as a deputy, a dispatcher and a jailer.

“It’s one of those things. When it gets in your blood you have a hard, hard, hard time getting it out of it. I fell in love with it,” he said. “Whenever I was a younger chap, I decided one of these days I wanted to be sheriff. I knew the best thing to do was to work to get there and that’s what I’ve done the last 17 years.”

He was chief investigator in Lawrence County last year until he qualified to run for sheriff, then he became a patrol deputy for the Lincoln County Sheriff’s Office. He’s also been a police officer in Hazlehurst and an investigator at the Wesson and Co-Lin police departments.

And for two whole months in the middle of it, he worked in the oilfield. That’s all it took for him to realize law enforcement would always be his career.

As sheriff, Everett is building his staff. He required everyone who worked in the previous administration to resubmit an application to work for him and he’s taking applications from the public as well.

It’s all part of his plan — and his campaign slogan — to put the “Law” back in Lawrence County.

He plans to implement programs like DARE in schools to reach the youth and steer them toward a positive path in life.

“Parents aren’t doing their job as parents at home anymore and educating their children on the right way and the wrong way to live in this world and behave at school, church, in public and other places,” he said. “Most of your teachers will tell you, ‘We don’t have problem students, we have problem parents.’”

That’s evident in a lot of the crimes he sees committed by children under the age of 18.

He wants to reach those teenagers before they become adults. That starts with communication, respect and trust. He said he wants children and adults to trust law enforcement in Lawrence County.

“We’ve got to start back at Ground Zero and we’ve got to earn the public trust back,” he said.

Everett has an open-door policy at his office and anyone is welcome to come talk to him.

“A lot of time people will call, they’re not asking for advice, they just want someone to listen to what they’re saying. They want to be heard,” he said. “I’ve made it a practice for the last 17 years if somebody had something to say and they wanted to tell me I’d be glad to sit there and listen. We’re here to serve the public. We’re not here to be bullies or intimidate people. We’re here to take care of the victims and try to help others not become victims.”