Mississippi senator loyal to Trump is filing for reelection 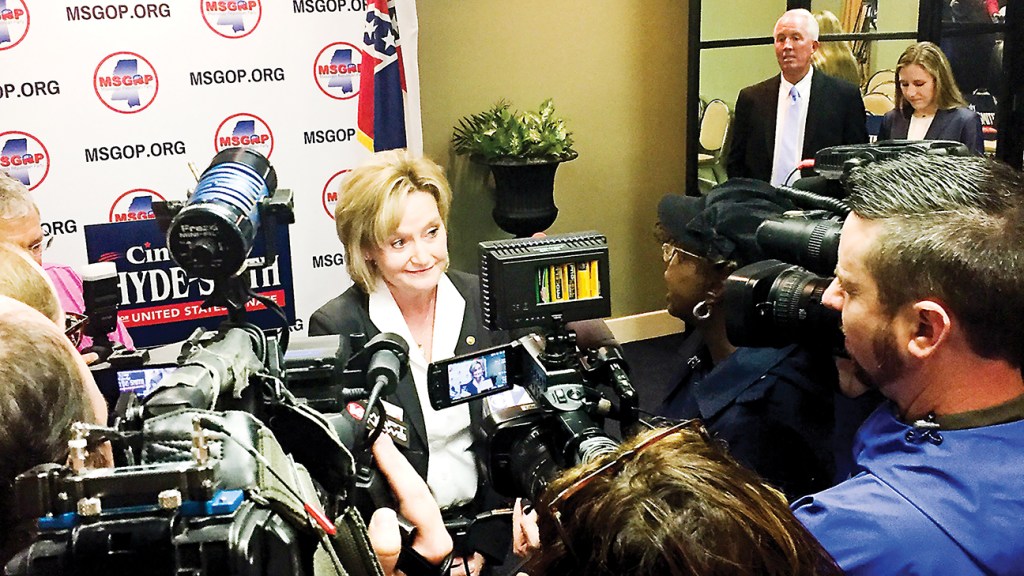 (AP) — Republican U.S. Sen. Cindy Hyde-Smith of Brookhaven is filing papers Friday to run for reelection, and she’s expected to campaign by emphasizing her loyalty to President Donald Trump.
A Democratic challenger, Mike Espy, has been reminding voters about a “public hanging” comment Hyde-Smith made in 2018 that dredged up Mississippi’s painful racist history.
Hyde-Smith was the state agriculture commissioner when Republican Gov. Phil Bryant appointed her in the spring of 2018 to temporarily succeed longtime Sen. Thad Cochran Cochran, who retired amid health concerns. She is the first woman to represent Mississippi in Congress.
Bryant leaves office when his second term ends Jan. 14. He tweeted Thursday that he will campaign for Hyde-Smith this year “as if the fate of America depended on her single election. If Mike Espy and the liberal Democrats gain the Senate we will take that first step into a thousand years of darkness.”
Espy is a former U.S. House member and former U.S. agriculture secretary. He lost to Hyde-Smith in a November 2018 special election to fill the last two years of the six-year term started by Cochran.
That campaign was rocked by a video showing Hyde-Smith, who is white, praising a supporter by saying she’d attend a “public hanging” if the man invited her. She called it an “exaggerated expression of regard.”
The comment made Mississippi’s history of lynching a central theme in the campaign. Espy announced weeks ago that he would run for the Senate again this year, emphasizing his role as Mississippi’s first black congressman since Reconstruction.
“We can’t continue the change we need if we have a senator who openly laughs about public hangings and makes statements supporting voter suppression,” Espy said in his announcement. “Cindy-Hyde Smith is hurting Mississippi — our progress and our reputation — and we simply must replace her.”
If elected, Espy would become Mississippi’s first African American U.S. senator since Reconstruction. He said he wants to reduce poverty, make health care more affordable, increase well-paying jobs, improve schools and end Trump’s trade war that’s pressuring farmers financially.
Candidates’ qualifying period in Mississippi started Thursday and ends Jan. 10. The state’s U.S. House, Senate and presidential primaries are March 10. If primary runoffs are needed, they will be March 31, leaving a long stretch until the November general election.
It’s unclear if Hyde-Smith will have any opposition in the Republican primary. During her time in office, Hyde-Smith has focused on rural issues and opposition to abortion.
Trump campaigned for Hyde-Smith in Mississippi in 2018, and he praised her when he held a rally in 2019 in Tupelo, days ahead of Mississippi’s gubernatorial election.
“Cindy Hyde-Smith — she’s incredible,” Trump said. “She’s tough and smart and strong, and she’s with us all the way.”
Federal Election Commission documents show Espy raised nearly $100,000 through Sept. 30 and had $131,000 on hand, while Hyde-Smith raised more than $983,000 and had $583,000 on hand.