Brookhaven Police Chief: ‘They fought to the end’ 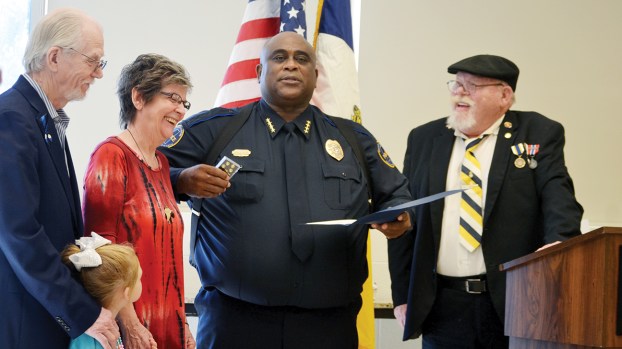 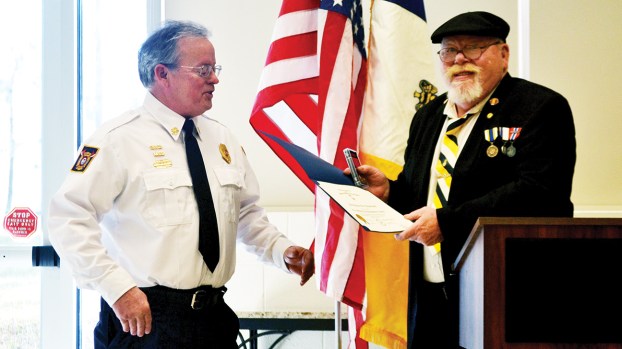 Photo by Donna Campbell The South-Central Mississippi Chapter of the Sons of the American Revolution presented awards Saturday to fallen Brookhaven police officers Zach Moak and James White as well as the Brookhaven police and fire chiefs on behalf of their departments. Pictured are, from left, Brookhaven Fire Chief Tony Weeks and Nolley.

Two fallen officers and their department received medals Saturday from the Sons of the American Revolution.

During the quarterly meeting of the South-Central Mississippi Chapter, held at the Lincoln County Public Library, awards were presented to two slain Brookhaven officers, patrolman James White and Cpl. Zach Moak, as well as the Brookhaven Police Department and the Brookhaven Fire Department.

Chapter President Michael Nolley Sr., of Gulfport, presented the awards to Police Chief Kenneth Collins to give to the officers’ families.

“It makes me feel good that they’re honoring my son,” he said after the meeting.

Collins called his officer one of the nicest people he knew and said he would continue to fight for a safer community to honor his and Moak’s deaths.

“Through this tragedy, it brought us all together. Something that was meant for bad, changed into something that joined the whole community together. We promised, with the family of Zach, to never stop fighting. We’re going to call the devil a liar every chance we get,” he said.

Nolley then gave a medal and certificate to Collins to present to Moak’s family, who were represented by his parents, Vicki Moak and Marshall Moak, and his niece, Avery Moak.

“It won’t replace your son, but it helps us all heal from that,” Nolley said.

Collins said Moak was a man of few words.

“He didn’t talk that much,” he said. “He let his actions prove who he was. Sometimes you can speak softly and carry a big stick. No matter what we got into, Zach was, ‘Alright, let’s do it.’ That’s just the type of person he was. He gave his life. He was worried about James. He died doing his job. There is no greater love than someone to sacrifice themselves.”

The two officers were killed Sept. 29, 2018, while responding to a shooting on North Sixth Street.

“They were trying to find out who was hurt,” Collins said. “This individual hid in a shed and ambushed them. They fought to the end.”

Collins also accepted a medal and certificate for his department.

“You never know the day that you’re going to leave this world so you pray to God to give you strength,” he said. “You kiss your family goodbye every day. That’s the only way you can do your job. You can’t be afraid of dying because then you’re afraid to live.”

The Brookhaven Fire Department was also presented with an award. Originally, SAR planned to give the medal to Fire Chief Tony Weeks, but Weeks declined.

“I wanted to give this award to him personally but he refused to take it,” Nolley said.

The Coast man said he respected fire fighters because they once put their lives on the line to rescue him.