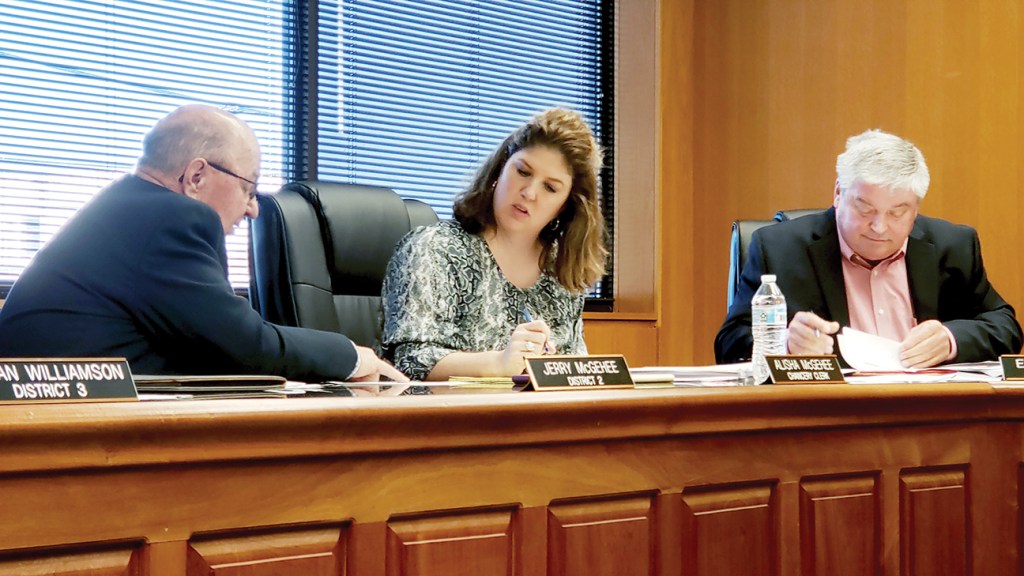 Lincoln County supervisors Monday voted in a new president and vice president and accepted a raise for themselves passed by the Legislature last year.

In his last act as president, District 1 Supervisor Jerry Wilson voted to hand over the title and his chair to District 4 Supervisor Eddie Brown. It passed 5-0.

Brown then continued the voting with a request for a vice president.

District 2 Supervisor Jerry McGehee, in his first meeting since he was sworn in Dec. 27, made the motion for District 5 Supervisor Doug Falvey to fill the position with District 3 Supervisor Nolan Williamson making the second. The vote passed 3-2, with Brown and Wilson voting against it.

Longtime board attorney Bob Allen will continue in that capacity, but it wasn’t by a unanimous vote. Falvey was against the appointment.

Falvey also voted “no” to keeping David Fields on as county administrator, a job he’s had for 22 years. The vote passed 4-1.

Neither vote was a surprise.

On the first day of the two-day executive session in May, the board made an unusual demand and asked both Allen and Fields to leave the room while they met.

Lincoln County had several audit issues in 2019 including a $165,000 civil demand to then-Chancery Clerk Tillmon Bishop for failure to reimburse the county for employee salary expenses from his office.

Bishop has said there is “no money missing” and that it’s an accounting issue.

Falvey, Williamson and Brown, as well as former supervisor Bobby Watts, were also issued civil demands related to voting to improperly pay the salary of a chancery clerk employee with county funds, a vote that has been questioned by Falvey.

“It was never voted on, but it was in the folder of the minutes for that month. How it got there or anything, I don’t have a clue,” Falvey said in June.

Each demand received by the supervisors was worth $5,666 and includes investigative costs and interest. Bishop paid the settlement for each of the supervisors.

In July, White issued a demand to Fields for $3,258.80, saying Fields failed to deposit chancery clerk payroll reimbursement checks on time over a three-year period, costing the county more than $1,668 in interest the money could have earned. The demand also includes interest and recovery fees.

Williamson voted Monday to keep Fields in the non-elected position, but with a warning.

“David, this time we want to be kept up to date on every, every, everything. That stuff last year hit us blindside. We had no idea,” he said.

The board also voted to approve a 3 percent pay raise that was provided by the Legislature last spring.

The board next meets Friday for a payroll and docket meeting. The next regular meeting is Jan. 21 at 9 a.m. since Jan. 20 is Martin Luther King Jr. Day and the courthouse will be closed.