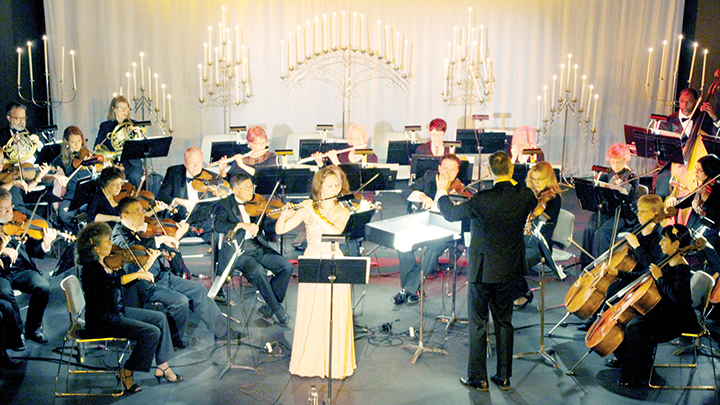 Daily Leader file photo The Mississippi Symphony Orchestra will perform “Mozart by Candlelight” for the fourth time in Brookhaven on Jan. 24.

Amidst the candlelight, the symphony is coming to Brookhaven.

On Jan. 24, for the fourth time, the Mississippi Symphony Orchestra will perform “Mozart by Candlelight” at the Haven as one of Brookhaven Little Theatre’s featured shows.

The Haven isn’t the only venue MSO will be performing “Mozart by Candlelight” at, but at only around 300 seats, it is the smallest. It’s also an old building, designed for the theater, giving the building a distinctive acoustic quality.

“I think that’s what lends itself to such an intimate and magical night,” Waterloo said. “And the fun thing — they’ve even told us this time after time — our building is historic. Sometimes in a historic building, the sound they are able to offer — it can’t be matched.”

“Mozart by Candlelight” will also be presented in Jackson and Vicksburg. But it’s that sound — and people’s enthusiasm for the smaller, more intimate venue — that has led MSO to make Brookhaven a regular stop for their Mozart performances.

That feeling of intimacy has made the Haven an attractive venue for visitors from out of town, and with the limited seating, tickets are selling quickly. Waterloo said she expects a full house.

Fans of the symphony can purchase tickets from brookhavenlittletheatre.com for $30, with an additional $2 ticketing fee. Tickets can also be purchased by phone at 601-990-2243, and if tickets remain available, they will be sold at the door.

“It’s selling fast,” Waterloo said. “It’s one night only. We do have seats left, so we would love to invite anyone and everyone who would like to attend, just as a special night. It’s an evening where people can have a nice date night, or go as a group to attend.”

Waterloo said the doors — and the bar — will open at 6:30 p.m., and the show will begin at 7:30. The show is expected to continue until around 9:30 p.m. and will include a brief intermission.

“It’s a fun night to dress up and enjoy a nice evening,” Waterloo said. “There’s nothing else like it.”