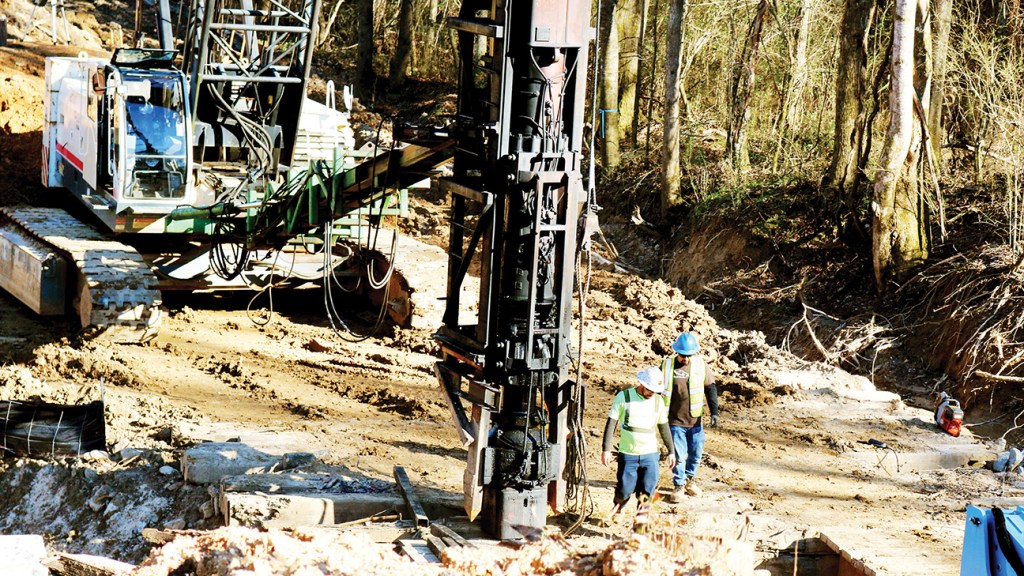 Photo by Hannah Henderson Bridge construction has begun on Lott Smith Road, in the northern part of Lincoln County. Pictured are members of a crew working there Tuesday afternoon.

The county’s engineer wants supervisors to come to the table for a brainstorming session this month to make a four-year plan for road and bridge repair.

Fund amounts haven’t been released yet, but engineer Ryan Holmes expects supervisors will have about $3 million in state-aid money to spread out over the county during the four-year term.

“We’re going to have to make some tough decisions,” he told Lincoln County Board of Supervisors Monday. “It’s just the way it is. We should get about $3 million,  typically what we get for about four years, plus or minus. It may fluctuate a couple hundred thousand either way. We’re not going to be able to do all we want to do. That may change over the four-year period, but we’ll have to start with what we’ve got and plan that out.”

In November, Holmes suggested to supervisors that they ride together through each district to inspect every mile of road. He made that request again.

“I can plan that right now,” said District 3 Supervisor Nolan Williamson. “What ain’t got done this year, just keep on going.”

Holmes gave a quick run-down on some of the ongoing projects — all state funded come from LSBP and the Emergency Road and Bridge Repair Fund. The ERBR Fund was created by the Mississippi Infrastructure Modernization Act of 2018, which was signed into law during the 2018 Special Legislative Session. It authorized issuance of up to $250 million in bonds to repair public roads and bridges in the state.

Lincoln County received about $5 million in a one-time award.

“Hopefully, they may get done driving pilings this week,” Holmes said.

“Hopefully, in a couple of weeks that will be approved and we can get that one,” he said.

Dirtwork on Rollins Drive was in progress in November but work was delayed because of winter weather. Holmes said the job is now complete, pending punch list work.

The Wakefield Lane project has been approved by State Aid Road Construction, and advertising for the job will likely occur in early February.

“It could be spring before that kicks off,” Holmes said.

Plans for Arlington Road and Maple Lane are complete and while Holmes has a verbal confirmation from the Army Corps of Engineers, he has not received a written report.

Final inspection for Summers Lane is scheduled in a few weeks.

District 1 Supervisor Jerry Wilson said he’s been asked about the lack of rails on the box culvert that was used for that bridge.

“Typically we don’t put rails on box culverts,” Holmes said. “Obviously we put them on bridges, but not when adequate clear zone on the roadway is there. That box is wide, it’s got wide shoulders and the slopes are real gentle.”

Holmes said it would be difficult to drive posts in the ground because the soil over the concrete is just a foot and a half deep.

“I don’t think you need them,” he said. “We obviously want to be safe but it’s pretty common that we don’t put those on box culverts.”

Holmes said the bridge was designed and built to state and national standards so there shouldn’t be a liability to the county by not installing rails there.