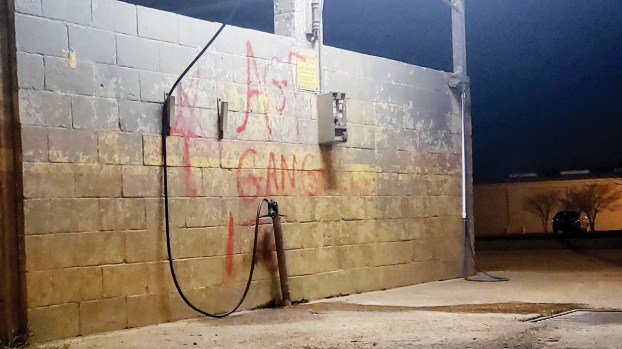 Photo by Donna Campbell Graffiti painted on a wall of a car wash on Hwy. 51 is being blamed on juveniles who are also suspected of several auto burglaries over the weekend.

Brookhaven police are asking for the public’s help to identify a group of juveniles suspected of burglarizing vehicles and spray-painting gang signs over the weekend.

“We’ve got a bunch of kids running around breaking in cars again,” Police Chief Kenneth Collins told the Brookhaven Board of Aldermen Tuesday. “You can see they’re kids. They’re jumping the fence and they hid from the police car when they came through. They jumped a 6-foot wooden fence. There’s four or five of them. They’re the ones who painted the little gang signs on the side of Cracker Barrel car wash.”

Collins is looking for solutions for the situation.

“These are kids and I don’t know what we’re going to do. We lock them up and they keep getting out,” he said. “I’m just afraid somebody’s going to hurt one of them sooner or later because they wander at night, 2 and 3 o’clock in the morning.”

Collins has spent several nights recently patrolling from 10 p.m. to 3 a.m. in addition to his regular day shift. Patrol has been stepped up in the areas regularly hit.

“We’re just trying to catch them. It’s the only system we’ve got. Lock them up, they get out, but you have to keep trying. But the community needs to help us,” he said. “It’s scaring me to death that one of them is going to get hurt, or they’re going to hurt somebody. It’s coming. People are tired of it.”

At the meeting Tuesday, Collins presented a complete policy manual that’s been in the works since he took office in 2017.

It covers a large range of issues that affect officers’ job performance including social media use and drones.

An updated policy manual to include best practice standards is one of several requirements for the department to receive accreditation through the Mississippi Law Enforcement Accreditation. Having the policies in place can reduce major risk and high liability conditions for both the agency and the employees.

Collins said some of the policy that came from past administrations was outdated and incomplete.

“What we had was vague and it’s going to get us in trouble,” he said.

Receiving state accreditation through the commission, which was created in 2004, will also enable Collins to apply for more grants.

“If we can get accredited, that opens us up to a lot more money, grants,” he said.

The new policies, once approved, will override the policies currently used from past administrations.

City attorney Joe Fernald has signed off on the policies and Collins presented the manual to aldermen Tuesday for approval. His plan was to get it approved so officers can begin learning the new policies. He said sections would be read to officers at the beginning of each shift and they would acknowledge receipt each time until the entire policy book was covered. He expects it will take a few months.

“We’re going to make sure every officer knows the policy,” he said.

However, the board voted to table the issue at Mayor Joe Cox’s recommendation until aldermen could read through the manual themselves. Collins said he’d make a copy available in city hall for them. The item will likely be on the agenda at the next board meeting Jan. 21.

In other business Tuesday, aldermen voted to:

• Approve pay request No. 4 from R&J Construction for $27,208.45 for work completed on the Airport Taxiway Extension Project.

• Approve to revise the donation from Angel’s Attic for $500 into the Animal Control Dog Food Expense budget.

• Approve a 2017 Ford utility vehicle as an unmarked police department vehicle for an investigator.

• Approve to adopt the state meal reimbursement rate for 2020 at $46 per day.

The board met in executive session to discuss personnel and after the closed-door meeting voted to terminate solid waste employee Markeis Caffie for cause.

The board also met in executive session with Lincoln County Economic Development Director Garrick Combs to discuss “location, relocation or expansion of a business.”

No action was taken after the closed-door session.

English teacher takes BES crown as Teacher of the Year