‘A Night of Quartets’ coming to Brookhaven 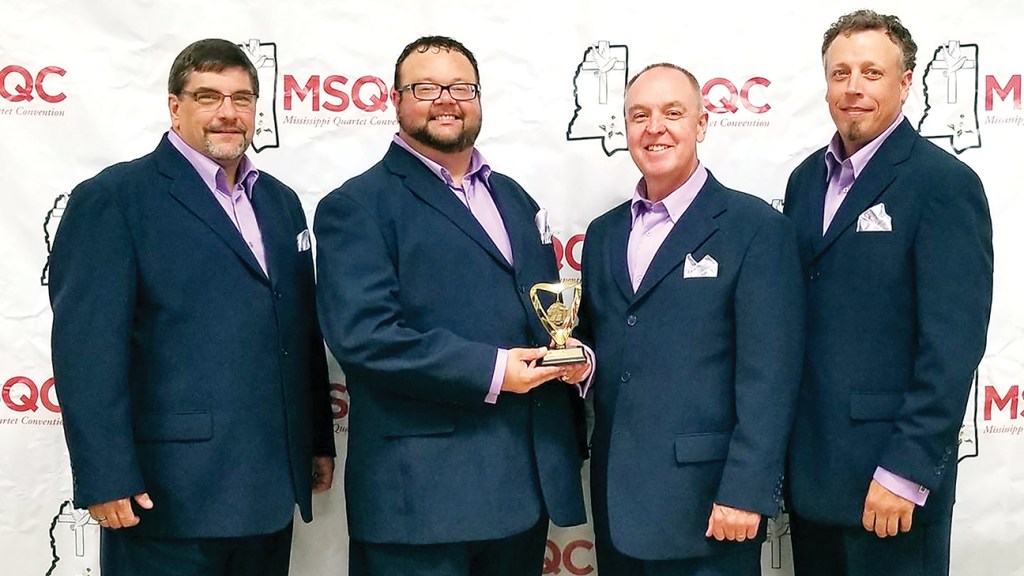 Photo submitted Pictured are, from left: Zion’s Way members Rodney Homan, Jason Oxenrider, Jeff King and Kenneth Stedman were awarded Male Quartet of the Year at the Mississippi Quartet Convention for the third year in a row, 2017-2019.

It’s called “A Night of Quartets.” Three all-male quartet groups with members spanning generations will be performing in Brookhaven.

“We love quartet music, and the harmony, and the blends and the message in the songs,” Jeff King said.

King, a Brookhaven local, is just one member of Zion’s Way, one of the three quartets to perform at “A Night of Quartets.” The event will be at Southway Baptist Church Saturday starting at 6 p.m. There is no charge to attend.

King said he’ll be 57 when his birthday comes around, and his own group has more than 100 years of experience in quartet music between them.

Four the King — the youngest group, with members in their mid-20s — will be kicking off the event. King said it has been inspiring to him to see traditional quartet music continued on in the next generation.

“We love to see those young guys,” King said. “I tell you, I’m an old guy and I start seeing more and more young people come to our singings. These young guys in Four the King, it’s great seeing them.”

“I’ve been trying my best to get everyone out of there by 9 o’clock because the next day is church day,” King said.

In some ways, it’s a small world among all-male quartets singing gospel music. The other members of Zion’s Way do not live in Brookhaven. They’re spread out around Mississippi and Alabama. But they have continued to meet each other through the years at quartet conventions and tours. Zion’s Way was formed from a common interest.

“It’s just some guys that love it and have loved it a long time,” King said. “We wanted to sing. We try to sing once a month at least with my group.”

Southway Baptist Church is one venue that the group continues to come to. For King, who is a member of the church, it’s home. King said he likes to do two or three events at the church a year. People who want to follow the group online can do so at facebook.com/ZionsWayQuartet.

“We encourage people to come,” King said. “We’ll have people to help park. If it’s raining, we’ll help you get out of the rain.”