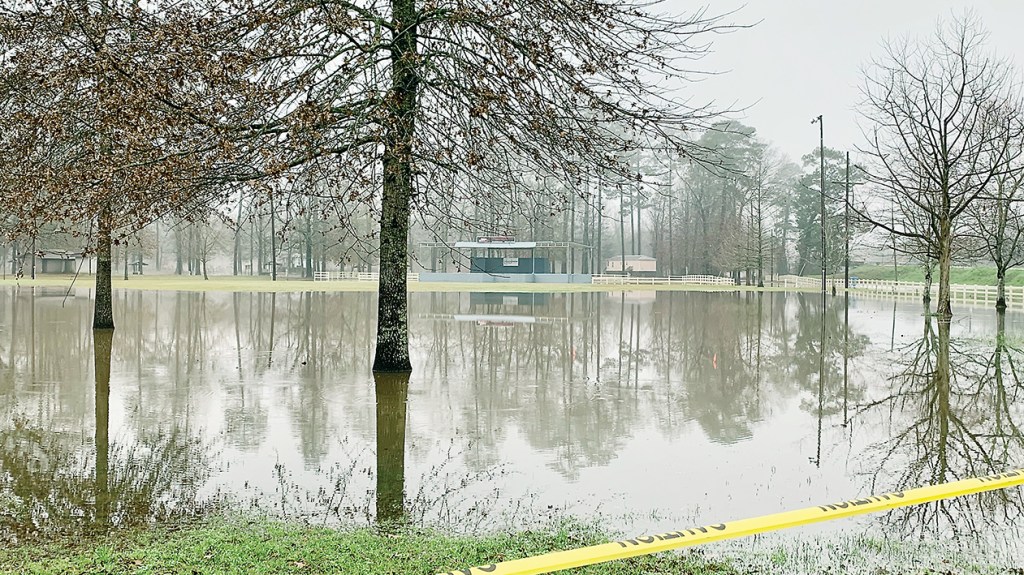 Photo by Kristi Carney Standing water covers most of the outdoor theater field at Atwood Water Park in Monticello Wednesday morning. The National Weather Service in Jackson projected the Pearl River to reach flood stage at 28.5 feet around noon today, which will cause further flooding in surrounding areas.

After days of rain, Atwood Water Park may be completely underwater Thursday afternoon and Friday morning. The park was closed and power was shut down Tuesday morning in preparation for the rising water.

“I’ve already shut the water park down — got all the campers out,” Lawrence County Emergency Management Director Tony Norwood said.

According to data published by the National Weather Service in Jackson, Atwood Park near Monticello will be completely flooded if the Pearl River reaches a flood stage of 28.5 feet. The NWS data said the river is projected to reach that level at about noon Thursday and remain that high until 6 a.m. Friday.

Monticello Mayor Martha Watts said she expects her own lower driveway to flood.

Due to heavy rains, the Pearl River has been in a moderate flood stage since Saturday afternoon. Norwood said that NWS river forecasts were “pretty doggone close.”

Watts said she does not expect major damage to the park or its facilities, but time will tell.

“I think we’ll be fine,” she said. “We did a bank restoration project about two years ago, and that has really held very well. Of course, there’s always cleanup.”

Norwood said during heavy rains and flash flooding, travelers should pay attention to their surroundings and exercise common sense when on the road.

“If the water is on the ground, don’t drown,” he said. “Please don’t drive over water.”

As of Wednesday, no roads were closed in Lawrence County, but Norwood said that may change.

“We’ve got River Road and we’ve got Old Hwy. 27 N,” Norwood said. “We’ll be keeping a watch on it. But right now, all roads in Lawrence County are open.”

Norwood said Collins Road was closed to school bus traffic, but not technically closed to all vehicles.

The Pearl River could rise further if more water is released from Jackson’s Ross R. Barnett Reservoir, managed by the Pearl River Valley Water Supply District. Norwood said he was in contact with the organization and monitoring the situation closely.

“We’re at the mercy of Ross Barnett right now,” Norwood said. “If they stay where they’re at, we’re in good shape. If they let more water out, we’re going to be in a bind. But right now, we’re good to go.”

“They do what they do,” she said. “They do things their way. I don’t think what they do is always the right way, but it’s a major force to go up against. I don’t know if there’s any way I could win that battle.”