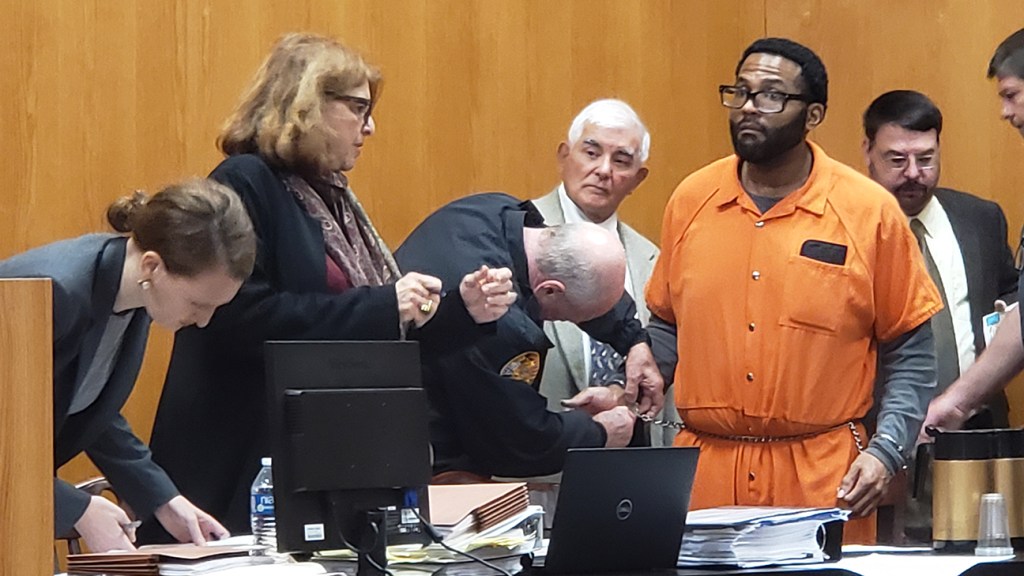 In a capital murder trial set to begin in three weeks, prosecutors intend to prove that a Bogue Chitto man executed a Lincoln County Sheriff’s deputy before shooting to death seven of his estranged wife’s relatives and friends.

A status hearing for Willie Cory Godbolt took place Thursday in Pike County Circuit Court in Magnolia, the county seat. Godbolt is accused of a two-day killing spree in three locations in Lincoln County in 2017.

Godbolt, 37, is charged with four counts of capital murder, four counts of first-degree murder, attempted murder and kidnapping charges in connection with the May 27 and 28, 2017, killings of eight people — Deputy William Durr, 36; Brenda May; 52; Barbara Mitchell, 55; and Toccora May, 34, on Lee Drive in Bogue Chitto; cousins Jordan Blackwell, 18, and Austin Edwards, 11, on Coopertown Road, and Ferral Burage, 45, and his wife Sheila May Burage, 46, on East Lincoln Road.

Godbolt was arrested early on May 28, 2017, by law enforcement near Super Jack’s at East Lincoln Road and Hwy. 84 as he was walking away from the Burages’ home. He has been held in the Copiah County Jail ever since, making several short appearances in court for status hearings.

The majority of the daylong hearing Thursday involved requests by attorney Allison Steiner, who is with the capital defense counsel division of the state public defender’s office, to withhold certain photographs, phone call recordings and victim impact statements from the jury for various reasons.

She called the state’s choice of 200 crime scene, coroner and autopsy photos to be excessive and said many were too gruesome to be shown to a jury.

“We have eight dead people and if you do the math on that between the three different crime scenes and the eight different victims, you’re only talking about only 20 photographs per person,” he said.

Lincoln County Circuit Judge David Strong, who had not seen any of the photographs before the hearing, said since Steiner objected to certain photographs, it would be necessary to look at those so he could decide if they should be admissible, discarded or if he should reserve judgment until he heard the accompanying testimony to determine if the photograph would be relevant for the jury to see.

The photographs were shown on a large screen in the courtroom after a break, at which time potential witnesses were kept out of the courtroom. The first several photographs showed Durr shortly after the shooting as well as during the autopsy. While his widow, Tressie Durr, chose not to be in the courtroom, her mother, Brenda Hall, stayed.

Godbolt slumped over in his seat and kept his head down while the photographs were shown. Later, he busied himself reading to avoid looking at the screen.

Steiner argued that the photographs were gratuitously gruesome and objected to the use of most of them.

She pointed to a photograph of Durr’s hands as he was placed in a body bag by the coroner.

“It’s got the blood on it. I don’t think it’s necessary to establish that fact,” she said.

Adams said it’s the state’s theory that Durr wore his wedding ring when he answered the domestic call at Lee Drive, but was not wearing it after he died.

“It could become an issue,” Adams said.

Another photograph of Durr showed a circular impression on Durr’s bloody left palm that appears to be his ring. Adams said the state believes the impression was caused by his wedding ring that he had taken off after he was shot in the face.

Steiner rejected several photos throughout the hearing, but Strong did not find many of the photos she rejected to be “particularly gruesome” and allowed them.

After seeing crime scene photographs of Durr, Mitchell and Toccora May at Lee Drive, Blackwell and Edwards at Coopertown Road and Ferral Burage at East Lincoln Road, Strong ruled to allow some photographs to be shown to the jury. Some of the others were deemed redundant and he asked the state to choose. Others he said he’d need to hear testimony from witnesses before he could determine the photographs relevancy.

Steiner also objected to a 22-minute video walkthrough of one of the crime scenes saying it would “unduly prejudice the jury with an emotional reaction.”

Strong said he would watch it in chambers, but will likely decide it is relevant to be shown during the trial.