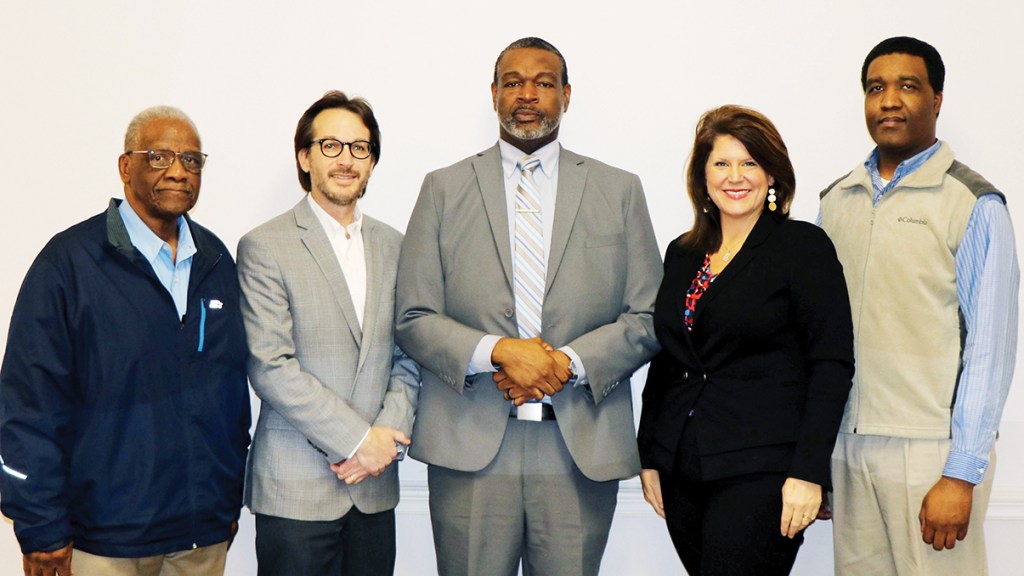 Deputy Rod Henderson and four members of the Brookhaven School District Board of Trustees.

Roderick Henderson was chosen as the Brookhaven School District’s next superintendent by the Board of Trustees Thursday.

The board voted 4-0 during a special-called meeting at the district office on East Court Street. Board Chairwoman Lucy Shell was not present for the 3 p.m. meeting.

Henderson, who has served as deputy superintendent for four years, will take over July 1 for Ray Carlock who is retiring in June.

“This district means a lot to me,” said Henderson, who was joined by his wife and two sons at the meeting. “I take this responsibility very seriously, and I will work very hard to make this district the very best that it can be. Through the hard work and cooperation of our teachers, administrators, staff and community, there’s no doubt that we can do this together.”

Board Vice Chairwoman Erin Smith said Henderson’s experience in the district prepared him for this new role.

“Mr. Henderson, Brookhaven’s native son, is a BHS alumnus and has served our district faithfully for over 15 years,” she said in a prepared statement emailed to The Daily Leader Thursday afternoon. “His deputy superintendent experience, as well as being a former coach, teacher, and principal in our district has prepared him to fulfill his role as the next superintendent of our school district. We congratulate him and his entire family on this appointment and look forward to working with him as we all continue to strive for academic excellence throughout the Brookhaven School District.”

Smith directed inquiries about the meeting to board attorney Bob Allen. A special-called meeting took place Tuesday to discuss the superintendent search and another took place Thursday at 3 p.m. for the vote. Notification for both was posted in the announcement section of the district’s website and posted on the door of the district office at least one hour prior to the meetings, he said.

The board began the search for a superintendent in November and accepted applications through Dec. 4.

The board’s search resulted in 12 applicants and interviews were conducted in January, Allen said.

“They have done yeoman’s work on this superintendent’s search and taken a lot of time,” Allen said.

Henderson is a 1990 Brookhaven High School graduate and a longstanding member of the Brookhaven community. Henderson received his bachelor’s degree in criminal justice from Grambling University in 1994 and he later obtained both a master’s degree and an educational specialist degree in educational leadership from Mississippi College. After graduating from Grambling, he taught one year in the Louisiana education system. After his stint in Louisiana, Henderson returned to Brookhaven as a history teacher at Alexander Junior High and football coach at both AJH and BHS.

In 2000, Henderson moved to Dallas for a brief time to pursue a teaching and coaching opportunity. His desire to be a part of the Brookhaven School System brought him back to Brookhaven in 2002 where he served as a teacher and a coach at Brookhaven High School.

In 2008, Henderson was selected to serve as principal of Alexander Junior High School where he oversaw the school’s level of achievement rise from a school labeled as “Risk of Failing” to one that was deemed a “Successful” school according to the Mississippi Department of Education’s rating system. It was also in 2008 that Henderson met the newly-appointed Brookhaven School District Director of Special Services, Stephanie Johnson.

The two married and have two sons, Roderick II, 10, and Michael, 8. Both boys are students in the Brookhaven School District. Henderson and his family are active members of Mt. Wade Missionary Baptist Church where he serves as a deacon.

Henderson was reared in a family with deep roots in the Brookhaven community.

His mother Ella Henderson, who died in 2009, served as a music teacher for the BSD for 31 years. His father, Chief Arlustra “Pap” Henderson, served in the Brookhaven Police Department for 43 years where he was chief for the last 12.

Carlock announced his upcoming retirement in November. The former superintendent of the Franklin County School District, he was hired by Brookhaven after Ben Cox retired in 2016 after two years in the job.

Lisa Karmacharya, who was hired in 2011, resigned as superintendent in June 2013 with two years left on her contract after criticism and low performance in the state accountability ratings. Two days later, Stephanie Henderson was unanimously voted in as interim superintendent. She served seven months until Cox was hired.