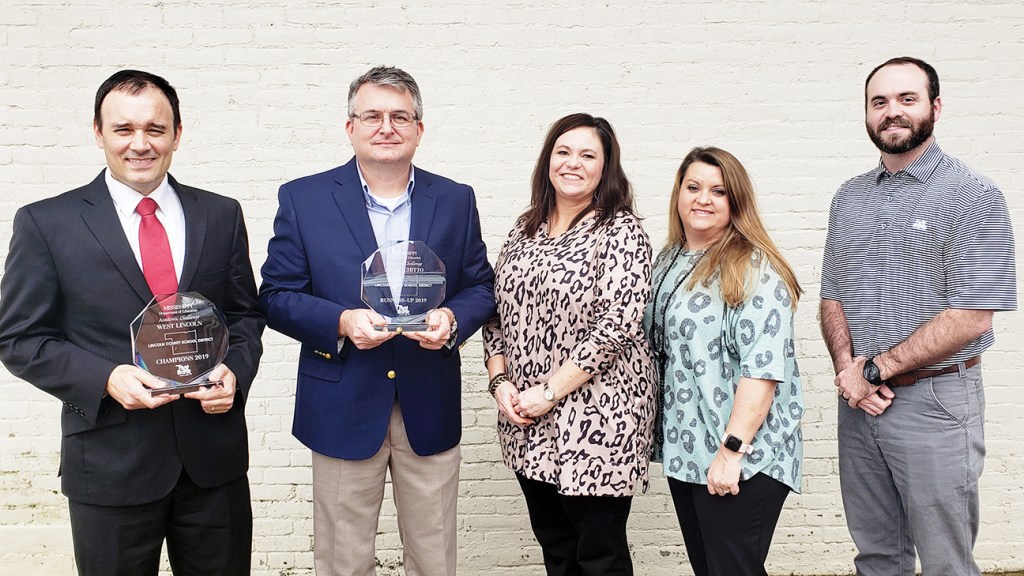 The results are in, and West Lincoln Attendance Center has once again taken home the winning prize. With a score of 737 on a 1,000-point scale, it has the top score in the Lincoln County School District for the Mississippi Department of Education Academic Challenge.

Superintendent Mickey Myers started the challenge as a way to encourage academic competition among schools in the district.

West Lincoln Principal John Shows credited the dedication of his staff, students and parents for his school’s success.

“It’s teachers, parents, staff all working together with the same goal,” he said. “That’s what it takes.”

Shows said the trophy will sit in the case outside of his office. It won’t be lonely — the school won the previous two first place awards as well.

“Next year will be the fourth one,” Shows said. It was a good-natured dig at Bogue Chitto Principal Scott Merrell, whose school won second place with 639 points.

Merrell said he wasn’t so sure.

“I love John to death but he’s going to lose one of these days and soon,” he said. “It’s an everyday process for us. It’s a lot of hard work with the teachers. More work than most people recognize.”

Shows and Merrell accepted their awards in front of First Bank this past week. First Bank Senior Vice President Jeremy Winborne said the bank, which sponsored the awards, was happy to sponsor local schools.

“It’s something that we enjoy being a part of and we’re glad that we can help any way that we can,” he said.

“For years — going back generations — Lincoln County schools have been highly competitive in athletics, and take a lot of pride in county championships and titles,” Myers said. “It’s something I wanted to start to promote academic competition. The schools have responded very favorably.”

The winner of the competition is chosen based on scores from the Mississippi Department of Education’s accountability rating, which is based on a number of factors.

The awards are heavy, acrylic-based trophies made from Pine Belt Trophies in Hattiesburg. Myers said he wanted a high-quality trophy for the award.

“I wanted them to become highly coveted by each school in the district, and they are,” he said.

In the years since implementing the competition, Myers said that all of the schools have improved significantly.

“I feel like the more we compete, the more the district benefits,” he said.