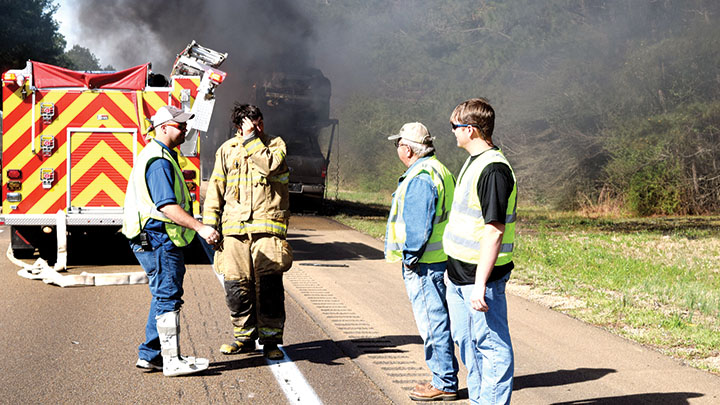 New Sight’s rating with the Mississippi State Rating Bureau has improved from 8 to 7. Ratings begin at 10 and lower is better. But residents who live near the department may not yet be able to benefit from the improved rating because of the way that the rating districts are laid out on the map.

“We have our local county jurisdictions, which is just our coverage area for the county,” Smith. “But there’s also something called a State Fire District, which is what your insurance companies look at. As of right now, our state map only covers about five square miles of our district.”

Lincoln County Emergency Management Director Clifford Galey said that he will soon begin petitioning to have New Sight’s State Fire District expanded. In the meantime, he urged residents to call their insurance agent to see if they lie in the district.

“They have contact with the state rating bureau,” he said. “They should know.”

Galey and Smith agree that improving the district’s rating from an 8 to a 7 required a lot of work and community support.

“I appreciate our community that has backing us,” Smith said. “We do it for them. I’m a community member myself, and I do it for everybody in the community.”

Including Smith, New Sight VFD has 15 volunteer firefighters, and manpower responding to a structure fire is an important metric in the rating system. Smith said they also have to keep up with their training, and availability of water is also important. Smith stressed that it was a team effort.

Galey said Mississippi State Rating Bureau reviews its districts every four years, but the county can request reviews early. Some of the eight districts in the county have a rating of 10, and Galey said he intends to request a review of those districts, though Galey said some of the districts suffer from a lack of water supply.

“We’ll have to go through a process and get petitions and so on,” he said. “Actually, I have some of those laying on my desk right now. I’m going to try and bring them to the board at the same time.”

As far as improving the district further, Smith said it isn’t likely to be feasible as it would probably require having a full-time firefighter at the department at all times. Every point involves significant improvements, and Smith said it can be difficult for volunteer fire departments to get below a 7.

“I’m not going to say it’s out, but right now I want to maintain that 7,” Smith said. “One day I hope we get enough trucks and enough tankers to one day establish that 6.”