Brookhaven fireman is living and loving his dream 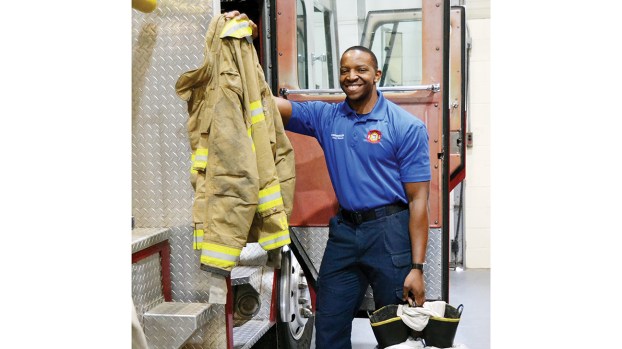 Photo submitted Dexter Harris, a firefighter with Brookhaven Fire Department and an emergency management technician for KDMC Ambulance Service, was awarded First Responder of the Year Tuesday by the Brookhaven-Lincoln County Chamber of Commerce. 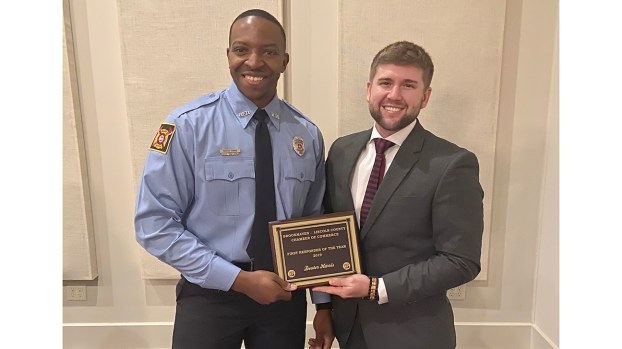 Running into a burning building is scary, but that pales in comparison to asking Porschia White on a first date.

Dexter Harris, a firefighter with Brookhaven Fire Department and an emergency management technician with King’s Daughters Medical Center Ambulance Service, received the First Responder of the Year Award Tuesday at the Brookhaven-Lincoln County Chamber of Commerce’s annual membership banquet. It is the second year for the award, first having gone to a Brookhaven police officer in 2019.

Harris, 28, has been putting out fires for more than five years. He’s been winning White’s heart for almost four months.

Harris, who graduated from Brookhaven High School in 2010, a year after White, smiles big when he talks about two things — his relationship with the KDMC ER nurse and his career as a firefighter.

“Porschia’s special,” he said, trying to keep from grinning. “I just thought she was going to say ‘no.’ It was even more scary (than fighting fires). But when she said ‘yes,’ I would have never thought I’d be in a relationship with her. Never in a million years and she knows that.”

Originally from Hazlehurst, Brookhaven has been home for nearly half his life. His mother, Gloria Harris, lives here. His father, Willie Harris, lives in Crystal Springs.

Firefighting was a dream he had as a teenager, but not one he ever thought he’d achieve. So he didn’t try.

After graduation, he held a few jobs including working at the Walmart Distribution Center. Though he worked there almost two years, he never felt it was a good fit for him.

He dusted off his old dreams and made a commitment to succeed.

He was hired in November 2014 and graduated from a 7-week intensive training course at the fire academy in September 2015.

He had played basketball his junior and senior years of high school, but he didn’t have the strength he needed to carry equipment that weighed as much as he did, never mind carrying someone out of a burning house.

A lieutenant suggested he begin a workout regimen. He bulked up to 220 pounds and began competing in firefighter contests.

“I love working out,” he said. “It makes my job a whole lot easier if I’m able to carry my body weight, be strong enough just to do my job.”

Because Brookhaven isn’t as busy as larger cities, it’s easy to become complacent. He fights against it with the same determination he uses to lift weights.

“I just make sure I’m ready at all times and make sure I’m in shape and working out on my days off when I’m not here so when the chance does come I can do my job and also help my brothers out,” he said.

His parents were concerned at Harris’ chosen career, but after a while they understood his desire to serve his community outweighed their fear for his safety.

“They saw how happy it made me to do something I said that I saw on TV that was so cool that I finally get a chance to do,” he said. “They see that I love this job.”

Harris wants to also be a role model for youngsters who may be afraid to follow their dreams.

“Do it. Do not be deterred by what others might say or how hard the job may be, or how long the school might be, how much you might struggle. It was a struggle for me but I was able to do it,” he said.

He enjoys being recognized and acknowledged for what his job is, but he is also humbled by the notoriety.

“I feel like it’s wonderful when people see you out in public and they greet you and tell you ‘thank you.’ But we just thank the public,” he said. “It’s our job to keep everyone’s property and everyone safe. I would not trade this decision of working with this job for the world.”