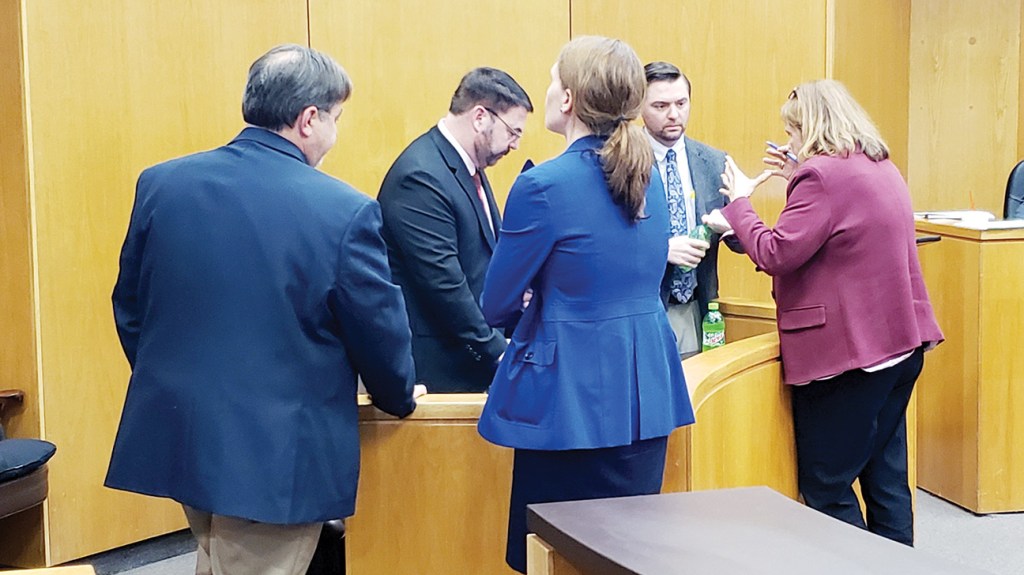 A Lincoln County circuit judge Tuesday, hearing for the first time more than a dozen calls placed to 911 operators the night eight people were murdered in a two-day shooting spree in 2017, decided most could be played for jurors during trial.

Defense attorneys for Willie Cory Godbolt objected to the calls for various reasons, but mostly for the potential to sway jurors during the capital murder trial set to begin in February.

Jury selection will take place in DeSoto County Feb. 9 and could take most of the first week. The case will be heard in Magnolia in the Pike County Circuit Court.

Judge David Strong reserved ruling on some calls, while allowing most. At least one was allowed if portions of it were redacted.

Godbolt, 37, is charged with four counts of capital murder, four counts of first-degree murder, attempted murder and kidnapping charges in connection with the 2017, killings of eight people — Deputy William Durr, 36; Brenda May; 52; Barbara Mitchell, 55; and Toccora May, 34, on Lee Drive in Bogue Chitto; cousins Jordan Blackwell, 18, and Austin Edwards, 11, on Coopertown Road, and Ferral Burage, 45, and his wife Sheila May Burage, 46, on East Lincoln Road.

Godbolt was arrested early on May 28, 2017, by law enforcement near Super Jack’s at East Lincoln Road and Hwy. 84 as he was walking away from the Burages’ home. He has been held in the Copiah County Jail ever since, making several short appearances in court for status hearings.

During the months leading up to the capital murder trial prosecutors have sorted through 672 emergency calls — from individuals to 911 operators made the night of May 27 into the morning of May 28, 2017 as well as calls from dispatchers to law enforcement.

Strong chose to hear the calls Tuesday, but reminded both prosecutors and defense attorneys that it was difficult to rule without hearing the context of accompanying testimony.

The first call came from the daughter of one of the victims at Lee Drive, who was hiding in the back of a car that was sprayed with bullets while she was inside it. Godbolt, sitting between two of his attorneys, kept his head down as the calls were played.

May is placed on hold as the dispatcher alerts deputies, although she continuously checks back with her and assures May she’s still with her.

Defense attorney Katherine Poor said the desperation and emotional pleas for help could cause jury sympathy. The facts of the call can be obtained through other means, primarily through the witness’ testimony, she said.

While Poor argued the call could prejudice the jury, Strong said May doesn’t mention the defendant’s name and ruled that the phone call would likely corroborate the witness’ testimony and allowed it.

Byrd played several calls, each time making an argument for why the call should be used, and Poor countering with reasons the defense doesn’t want the jury to hear it.

Two of the calls came from Sheena Godbolt, the estranged wife of the defendant, who was in the home on Lee Drive when the shooting began.

“Her exit was blocked so she could not run out the door the way her mother, the way her aunt and her sister tried to flee before they were shot down,” Byrd said.

Sheena Godbolt went to the back bedroom at her parents’ home on Lee Drive where her children were hiding and she placed the children outside the window and climbed out herself then ran to a neighbor’s house, he said.

Poor wants it kept away from a jury.

“The caller is crying, obviously upset, hysterical saying repeatedly on the first call ‘Jesus, Jesus, Lord give me somebody.’ On the second call, she’s saying what sounds to me like, around 34 seconds, she is saying, ‘Lord, please tell me my mother and grandma are all right.’”

Byrd said the call is important because it describes what occurred and it’s the first time that Lincoln County authorities learned that an officer had been shot.

Strong agrees with the prosecution.

“All the things that the defense claims leads to unfair prejudice are the very things that make the call admissible under the excited utterance rule,” Strong said. “She just witnessed an officer being shot and doesn’t know whether others have been shot. She doesn’t know the condition of her family.”

Byrd played a call from LePeatra Stafford who said Godbolt kidnapped her at gunpoint and forced her to drive him to Coopertown Road.

“Cory Godbolt is there shooting,” she said.

Byrd said Stafford was kidnapped at Lee Drive and until this call was made at 2:19 a.m. on May 28, officers did not know for certain that the shooter had left the first residence.

Poor objected to the use of the call because Stafford didn’t witness the shootings on Lee Drive.

Strong will allow it.

Byrd played other calls from individuals involved in the night’s events including 15-year-old Caleb Edwards who called 911 from inside the house on Coopertown Road. Byrd said testimony will show that Edwards was hiding underneath his cousin Jordan Blackwell when Blackwell was shot and killed, and near his brother, 11-year-old Austin Edwards.

Another call came from Shayla Edwards, who left Lee Drive to go back to her sister’s home on Coopertown Road. She gives the address, the first time dispatchers have it, and then is heard screaming as she enters the home, “He shot my son, Austin.”

Poor calls it an “extremely prejudicial call” and argued that the fact Austin Edwards had been killed has been established in other 911 calls and this call doesn’t offer any additional information. She asked that the end of the call be redacted if the call is played to jurors, “the screaming of Miss Edwards is so likely to elicit sympathy of the jury.”

Several other calls were heard, including one from Angela Hardy who had been on the phone with Sheila Burage when shooting began at East Lincoln Road.

Poor asked for many calls to be disallowed or seriously redacted, adding that many of the calls could sway a jury because of “the continuous impact of hearing upset callers over and over again.”