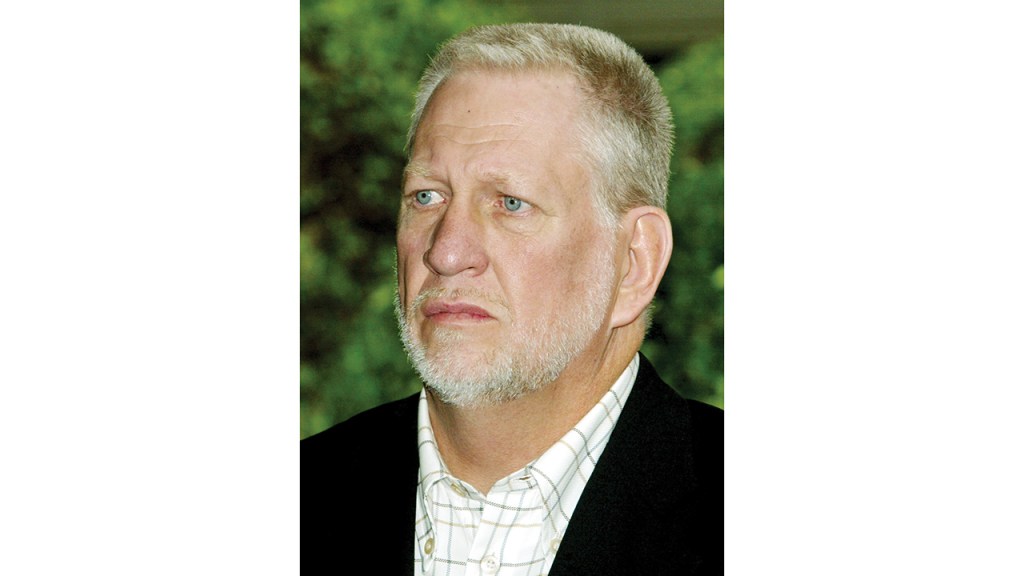 Former WorldCom chief executive Bernie Ebbers is shown following his arraignment in Oklahoma County Courthouse in Oklahoma City, Wednesday, Sept. 3, 2003, where he pleaded innocent in the long-distance company's $11 billion accounting scandal. The 62-year-old Ebbers was freed on $50,000 bail, and a pretrial conference was set for Oct. 30. (AP Photo/Sue Ogrocki)

The former chief of WorldCom, convicted in one of the largest corporate accounting scandals in U.S. history, died at home in Brookhaven just over a month after his early release from prison.

The Canadian-born former telecommunications executive died Sunday in Brookhaven, surrounded by his family.

“I know many of the victims of WorldCom opposed Dad’s release,” daughter Joy Ebbers Bourn said in a written statement to the media. “Many also wrote in support of his release. Many stockholders and employees lost their investments in the fall of WorldCom. Many of our friends — and many in our family — did too. Thankfully, (U.S. District) Judge (Valerie) Caproni agreed with us — keeping Dad in prison, especially in his unexplained and undiagnosed deteriorated condition, would not bring back anyone’s investments.”

WorldCom Inc. collapsed and went into bankruptcy in 2002, following revelations of an $11 billion accounting fraud that included pressure by top executives on subordinates to inflate numbers to make the company seem more profitable. The collapse caused losses to stockholders, including those who had invested through retirement plans.

Ebbers was convicted in New York in 2005 on securities fraud and other charges and received a 25-year sentence.

A federal appeals court judge who upheld Ebbers’ conviction in 2006 wrote that WorldCom’s fraudulent accounting practices were “specifically intended to create a false picture of profitability even for professional analysts that, in Ebbers’ case, was motivated by his personal financial circumstances.”

By the time of its collapse over its accounting fraud scandal in 2002, WorldCom was the nation’s second-largest long-distance business. Ebbers left that year and following his conviction, was imprisoned from September 2006 until Dec. 21, when he was released from the custody of the Bureau of Prisons.

In the meantime, WorldCom reemerged as MCI, taken over by Verizon, and relocated to Ashburn, Virginia.

Caproni said late last year that it fell within her discretion to order the early release of Ebbers after a lawyer cited severe medical problems and said that Ebbers had experienced severe weight loss. At over 6 feet tall, he had dropped in weight from above 200 pounds to 147 pounds. Attorney Graham Carner told the judge it was possible his client might not live another 18 months.

Ebbers taught Sunday School at First Baptist Church Brookhaven and Warren was his class on more than one occasion. He also worked under Ebbers’ leadership during Warren’s 11 years at WorldCom.

“The thing that stands out the most to me about Bernie was that he was always looking out for others in need. On countless occasions, people that he didn’t even know, he would reach out and help them,” he said.

Warren saw Ebbers help individuals and employees who experienced tragedies like house fires, sickness and death of a loved one.

“Bernie was never looking for recognition or accolades. He just wanted to help,” he said. “During this time, it’s a great opportunity for us to celebrate his life and be there to help his family.”

Before establishing himself in telecommunications, Ebbers had a diverse career that started in sports. He received a basketball scholarship at Mississippi College, where he majored in physical education. After graduating, he coached high school teams for a year before investing in a hotel; he eventually amassed a chain of Best Westerns in Mississippi and Texas, as well as a car dealership in Columbia.

Following the advice of friends and knowing little about the phone business, he invested in a small long-distance company, LDDS, in 1983. He eventually took over the day-to-day operations and bought up competitors, transforming LDDS — which was later renamed WorldCom, based in Clinton — into the fourth-largest long-distance company by 1996.

He was considered to be a “no-nonsense” man with a brash attitude who preferred jeans to a suit. One analyst cited in an early profile in the late 90s said Ebbers was “the telephone equivalent of Bill Gates.”

Bourne said she and her family continue to pray for everyone affected by the fall of WorldCom.

“My family and I are thankful for the time that we had to be with and care for Dad in his final days. We are especially grateful for the team that helped us secure his release, and particularly Graham Carner, our attorney,” she said. “Finally, we will forever be thankful for the compassion and courage shown by Judge Valerie Caproni in releasing Dad to us. Dad ran in to the arms of Jesus tonight, surrounded by his loving family, and not chained to a hospital bed without anyone he knew in the room. We will always be grateful for that.”

Riverwood Family of Brookhaven is in charge of Ebbers’ arrangements.

“We ask that the family’s privacy be respected at this time, and we covet your prayers,” Bourne said. “After we have had some time to grieve and heal, we intend to use this experience and our voice to advocate for those like Dad who are deserving of compassionate release to their families.”