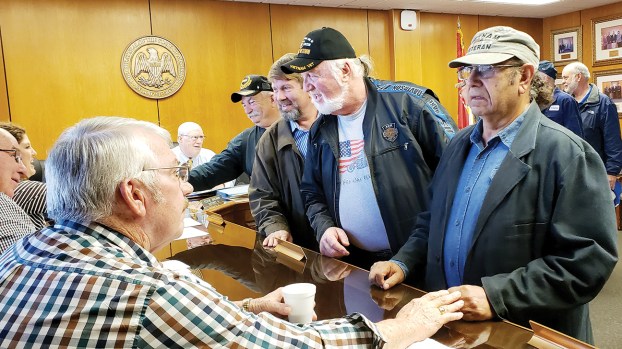 Photo by Donna Campbell Veterans of the U.S. Armed Forces and other supporters of second amendment rights were in attendance at Monday’s meeting of the Lincoln County Board of Supervisors, where the board unanimously approved a resolution to give the county Second Amendment Sanctuary status. Pictured are, from left: District 3 Supervisor Nolan Williamson, board attorney Bob Allen, Hervey Littlefield, Kendall Boutwell, Derrall Foster and Ramone Fernandez. 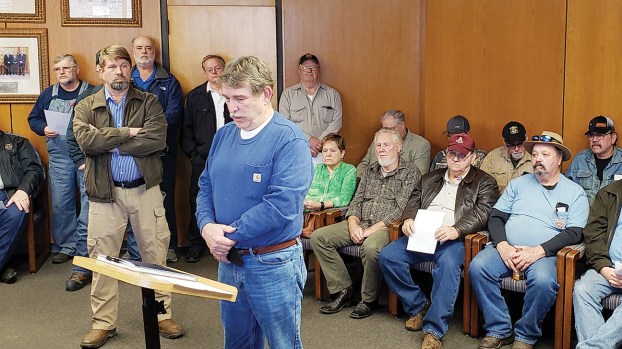 Photo by Donna Campbell Veterans of the U.S. Armed Forces and other supporters of second amendment rights were in attendance at Monday’s meeting of the Lincoln County Board of Supervisors, where the board unanimously approved a resolution to give the county Second Amendment Sanctuary status. Pictured, Lincoln County resident Tony Laird addresses the board prior to the vote.

Kendall Boutwell led the charge of about three dozen residents who packed the supervisors’ boardroom to ask for a declaration for Lincoln County as a place where public funds will not be used to restrict the Second Amendment rights of the citizens or to oppose any infringement on the right of law-abiding citizens to keep and bear arms.

“If we were all to be honest, we know that the only thing that preserves liberty is force in the end,” Boutwell said, addressing the board. “If you can’t defend your home, your families, your city, your country, mere words in many cases will not preserve liberty. We hope it won’t get to that point. But we see our rights are being taken in places, so we have to ask why. Why are they wanting to take our guns from us law abiding citizens? This question needs to be considered.”

Boutwell said the rights of gun owners “are being trampled” and citizens must remain proactive and vigilant.

“The wings of change and the political climate could shift at any time and we want these resolutions in place if and when these threats occur in Mississippi,” he said. “We must stand firm on our belief in the Constitution and Second Amendment rights and draw a line in the sand that government dare not cross.”

Boutwell was joined at the podium by several individuals who expressed their support of the sanctuary status.

Ramone Fernandez, a retired lieutenant with the Jefferson Parish Police Department, said he was also a Vietnam veteran and a high school teacher and he supported the declaration.

“We’re not asking for anything that we don’t already have. We just want to preserve our freedom and our rights that were written into the constitution and we don’t want to see that diminished,” he said.

Others, like Dennis Brewer, cited the Bible as the ultimate law.

“God gave us these rights. These rights are ours and belong to us. We just ask y’all to look at it, think about it. We’re all here as one group,” he said.

District 3 Supervisor Nolan Williamson made the motion in favor of the resolution with a second by District 5 Supervisors Doug Falvey. The motion passed 5-0.”

“This doesn’t require you to do anything with existing laws,” said County Attorney Bob Allen. “It’s for the potential that laws are passed that are declared to be unconstitutional such as confiscation of weapons.”

Following the vote, the supporters of the Second Amendment Sanctuary declaration shook hands with the supervisors.

“I hope we don’t never need it. I can’t say ‘thank you’ enough,” Boutwell said.