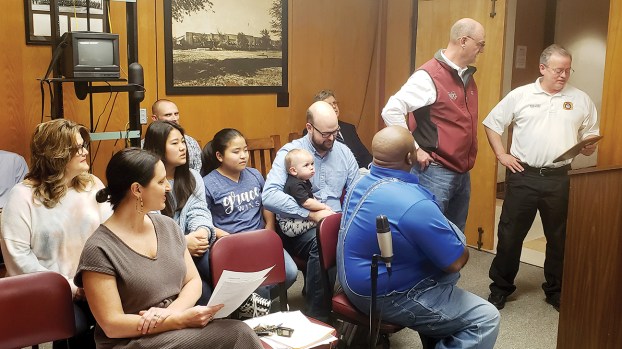 Photos by Donna Campbell Brookhaven Fire Chief Tony Weeks presented Shift Capt. Buddy Thibodeaux with a plaque to commemorate his 30 years with the department during a meeting of the Brookhaven Board of Aldermen Tuesday. Pictured on second row are, from left, wife Sheri, daughters Maelee Grace and Hanna, son Will and grandson Finn Robert, Thibodeaux and Weeks. 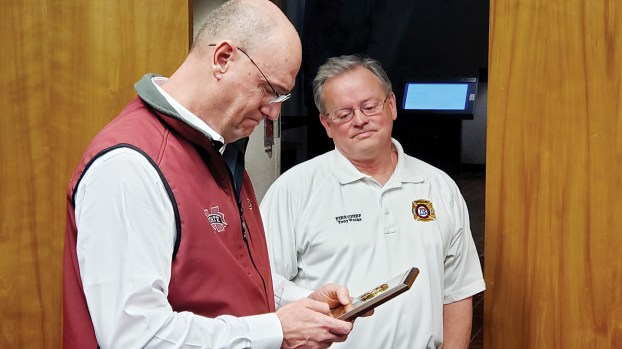 Photos by Donna Campbell Brookhaven Fire Chief Tony Weeks presented Shift Capt. Buddy Thibodeaux with a plaque to commemorate his 30 years with the department during a meeting of the Brookhaven Board of Aldermen Tuesday. Pictured are Thibodeaux and Weeks.

Four decades ago, Buddy Thibodeaux was a quarterback for the Brookhaven Panthers, and Kenny Collins was his fullback, keeping the ball safe.

Until Tuesday, Thibodeaux was shift captain for the Brookhaven Fire Department and Collins, the city’s police chief, is keeping us all safe.

Thibodeaux, 57, retired after 30 years of service to the city.

Chief Tony Weeks presented him with a plaque to commemorate his time with the department. Thibodeaux attended the meeting with his wife, Sheri, daughters Maelee Grace and Hanna, and son Will, who held a Thibodeaux grandson, Finn Robert. His youngest son, Ryan, couldn’t attend.

“It’s gone by quick. It seems like just yesterday he started working there,” Weeks said.

“It’s been an honor. It’s been my privilege,” he said, before he choked.

“We got it,” Mayor Joe Cox said, giving him time to recover. “Thank you.”

Collins, who was at the meeting for police business, applauded loudly for his former classmate.

“We played football together. He was a fierce competitor,” Collins said.

Thibodeaux moved with his family to Brookhaven from Baton Rouge, Louisiana, in 1975 and his stepfather joined the police force.

Thibodeaux went to college on a baseball scholarship and planned to be a coach. He hurt his arm his senior year at William Carey University and that took away his hopes of playing pro.

He came back to Brookhaven and married his high school sweetheart, Sheri Bowton, who is a nurse in Dr. William Rushing’s obstetrics and gynecology office.

He worked for a while at the Walmart Distribution Center then started in 1990 at the fire station, where his younger brother, Robbie, was a firefighter.

“I’ve always been interested in serving. I just love to help people,” he said.

He may now have time on his hands, but his retirement won’t slow him down. He plans to start a lawn care business. He’ll also continue umpiring high school baseball games, something he’s done for 15 years. His goal is to take it to the next level and get certification as a community college ump.

“I’m going to have a lot more time to spend to watch my daughters grow up,” he said. “God has always took care of us and I know he has a plan for us. I’m just opening that up to him.”