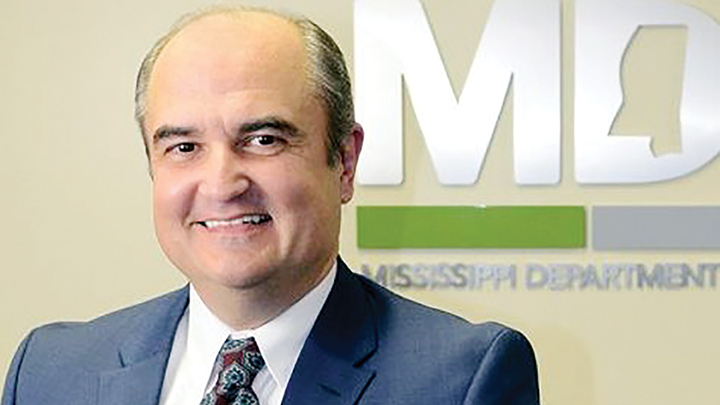 Special agents from the office of State Auditor Shad White Wednesday arrested John Davis, of Brookhaven, the former director of the Mississippi Department of Human Services, in connection with a multimillion-dollar embezzlement scheme. The indictments include a range of violations involving fraud and embezzlement.

Auditors concluded, after an eight-month investigation, that the accused conspired to illegally obtain millions in public funds from the Temporary Assistance for Needy Families program administered by DHS. Defendants used a variety of business entities and schemes to defraud the taxpayers.

“The funds that were illegally obtained in this case were intended to help the poorest among us. The funds were instead taken by a group of influential people for their own benefit, and the scheme is massive. It ends today,” White said.

White said it is the largest public embezzlement case in state history. The total amount of money lost to these schemes has not yet been determined, but the loss already exceeds any embezzlement scheme in the records of the auditor’s office. Records are kept for all cases from the last 20 years.

Because of the large amount of money involved, and until the full extent of the loss to the taxpayers is determined, this is considered an ongoing investigation by the auditor’s office.

If convicted on all counts, the accused face hundreds of years in prison. Individuals arrested by the Mississippi Office of the State Auditor are presumed innocent until proven guilty in a court of law.

Davis was appointed to the role of executive director of MDHS by former-Gov. Phil Bryant in January 2016. At the time of his retirement in July, Davis said, “I am looking forward to spending time with my family and pursuing a new career outside of state government to do even more for the great people of Mississippi.”

MDHS self-reported the information that initiated this investigation to Bryant’s office in June.  That report ultimately led to today’s arrests, according to a statement from the MDHS Department of Communications.

Before his appointment, Davis served as deputy administrator for programs, office director for the division of economic assistance and worked on the local, regional and state level including Lincoln County.

Gov. Kirk Fordice appointed Davis in 1998 to serve as director of the Lincoln County Department of Human Services. He stayed in that job until his appointment in 2005 to the position of director of state operations for the department of economic assistance.

Nancy New and her son, Zach New, stand accused of using the News’ non-profit, MCEC, to pay for DiBiase’s drug treatment using TANF funds. At Davis’ direction, MCEC used TANF money received from DHS to pay for DiBiase’s opioid treatment at the Rise in Malibu facility. The documentation submitted by the News claimed this was to pay DiBiase for conducting training classes that never, in fact, took place.

The News also stand accused of transferring millions in TANF funds to their private businesses. They then converted funds to their personal use and concealed the conversion through various fund transfers, fraudulent documents, at least one forged signature, and deceptive accounting measures.

Finally, Davis and the News are accused of creating a fraud scheme to take TANF funds to pay for personal investments in medical device companies — Prevacus Inc., and PreSolMD LLC — in Florida.

“I don’t care how politically connected a person may be. You do not have the right to treat taxpayer money as your own or to lie to the taxpayers about what you’re doing with that money. Others doing this kind of thing are on notice: this will not be tolerated now,” White said.

All accused were indicted by a grand jury assembled by Hinds County District Attorney Jody Owens. Owens and assistant district attorneys will prosecute the case.

“The Hinds County District Attorney’s Office looks forward to working with the State Auditor Shad White and his dedicated team to end public corruption in Mississippi,” Owens said. “The misuse of government funds designed for families in need will not be tolerated by our office and those who break the law will be prosecuted to the fullest extent possible.”

“We have worked tirelessly in the auditor’s office to uncover this sprawling conspiracy, so I want to thank the investigators, auditors, and analysts who all assisted,” White said.

Davis had many accomplishments and accolades from his years of service with MDHS. He was given the Award of Accuracy and Stewardship in the Food Stamp Program — ranked third in the nation and first in the Southeast region for payment accuracy in the Food Stamp Program, Quality Control Star Award from USDA Food and Nutrition Service for commitment of public trust, Food and Nutrition Service Excellence through Technology Award and many others.

Since his role as executive director, Davis has implemented mandatory work requirements for all Able-Bodied Adults without Dependents, partnered with MS Department of Employment Security to link participants to education, work and self-sufficiency created the Division of Workforce Development to assist Bryant with his promise to Mississippians, “to make sure every Mississippian who wants a job can find a job.”

Davis developed the Gen+ initiative to stabilize the family and to treat the family holistically. He also launched the Skills2Work Third Party Partnership Program to provide participants training, support and case management to gain skills to obtain a livable wage, began partnering with Mississippi Community Education Center as Intermediary for KLLM Driving Academy and has become a champion for establishing new partnerships with companies and agencies like Ingalls Shipbuilding, Families First of Mississippi and the Mississippi Department of Transportation to utilize heat maps for regional transportation.

In a release, DHS said during the three years as executive director, Davis played a critical role in leading the agency to adapt to significant changes and has helped make a better Mississippi.

Davis earned a bachelor’s degree in business administration from the University of Southern Mississippi and a masters of science in leadership from Belhaven University.

Additional suspected fraud involving this case or any other can be reported to the Auditor’s office online any time by clicking the red button at www.osa.ms.gov or via telephone during normal business hours at 1-800-321-1275.