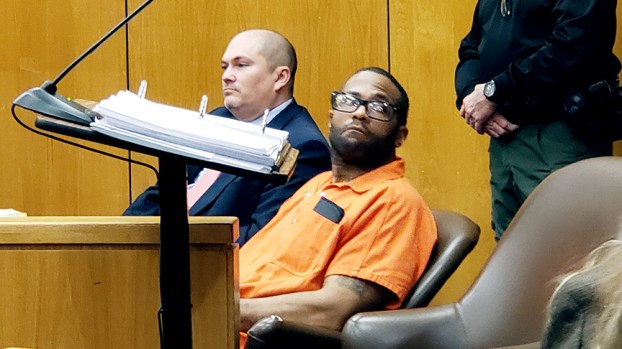 Jury selection in the capital murder trial of a Bogue Chitto man accused of shooting to death a Lincoln County deputy and seven other people, including two children, is set to begin Monday in Hernando.

Willie Cory Godbolt, 37, is charged with four counts of capital murder, four counts of first-degree murder, attempted murder and kidnapping charges in connection with the May 27 and 28, 2017, killings of eight people from Bogue Chitto to Brookhaven.

The state will seek to prove that Godbolt fired the fatal bullets in a two-day killing spree at three locations in Lincoln County in 2018.

Those murdered were deputy William Durr, 36; Brenda May; 52; Godbolt’s mother-in-law Barbara Mitchell, 55; and his sister-in-law Toccora May, 34, on Lee Drive in Bogue Chitto; cousins Jordan Blackwell, 18, and Austin Edwards, 11, on Coopertown Road, and Ferral Burage, 45, and his wife Sheila May Burage, 46, on East Lincoln Road. Godbolt was also related to Blackwell, Brenda May and Sheila Burage through his estranged wife, Sheila.

Godbolt was arrested early on May 28, 2017, by law enforcement near Super Jack’s at East Lincoln Road and Hwy. 84 as he was walking away from the Burages’ home.

District Attorney Dee Bates is seeking the death penalty for Godbolt, who pleaded not guilty.

More than 70 witnesses have been sent subpoenas to testify and Lincoln Circuit Clerk Dustin Bairfield mailed 500 jury questionnaires to potential jurors in DeSoto County in December. Prosecutors and members of the public defense team will question individuals beginning Monday to narrow the field down to 12 jurors and three alternates instead of the usual two, said Beverly Kraft, public information officer for the Administrative Office of Courts.

The selection could take two to three days, which would put the trial beginning in Pike County Courthouse in Magnolia as early as Thursday.

The jury will be sequestered for the duration of the trial in a Pike County hotel. They will receive a catered lunch at the courthouse each day. Bailiffs will escort them to dinner each night.

Jurors will be sequestered in order to prevent any attempt to contact or influence them, Kraft said. Jurors are not allowed to talk to anyone about the case — even each other, at least until deliberations begin.

It is likely court will continue for a full day on Saturdays and a half day on Sunday afternoons, if jurors wish to continue. Trial proceedings will continue through Feb. 17, which is Presidents Day and a state holiday, if the trial has not been completed by that time, she said. It is not certain how long the trial will last.

Defense attorney Allison Steiner, who is with the capital defense counsel division of the state public defender’s office, has said her client won’t likely use an insanity plea even though Godbolt underwent a psychological exam.

The jury is expected to hear hours of testimony from dozens of witnesses, including a newspaper reporter who filmed a confession from Godbolt on her cell phone the morning of his arrest. Godbolt, on the ground in handcuffs, is seen in the video describing what happened at the Lee Drive home where he’d gone to talk to his wife about their children. He told the reporter someone called the police. Durr was the first person Godbolt allegedly shot.

“It cost him his life. I’m sorry,” he’s heard saying on the recording.

During the months leading up to the trial prosecutors have sorted through 672 emergency calls — from individuals to 911 operators made the night of May 27 into the morning of May 28, 2017 as well as calls from dispatchers to law enforcement.

The jury will likely hear dozens of those calls during the trial including one from Godbolt’s wife that was made as she escaped the house with her children out of a bedroom window and ran to a neighbor’s home.

“Jesus, Jesus, Lord give me somebody,” she cries to the dispatcher. “Lord, please tell me my mother and grandma are all right.’”

Another call to be played is from LePeatra Stafford who said Godbolt kidnapped her at gunpoint and forced her to drive him to Coopertown Road.

“Cory Godbolt is there shooting,” she said on the recording.

Time almost up to register for primaries

Monday is the deadline to register for the 2020 primary. Potential voters who are 17 years old can also register,... read more