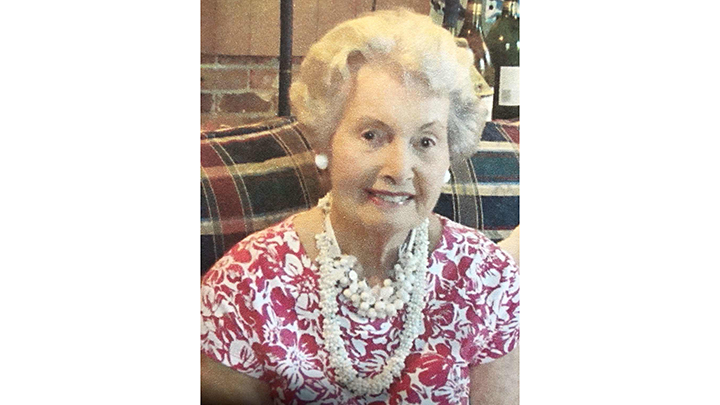 After a full long and eventful life of almost 99 years, Patricia Patterson Jacobs peacefully passed away Sunday evening at St. Catherine’s Village in Madison, Mississippi, leaving behind her family and a host of friends both young and old. As she stated in her personal papers: “I am off on another trip, another adventure. I have had a wonderful lifetime — blessed beyond belief.”

Visitation will be held on Wednesday, Feb. 12, 2020, from 4 until 7 p.m. at Riverwood Family in Brookhaven, Mississippi. A second visitation will be held on Thursday, Feb. 13, 2020, from 10 until 11 a.m. with a memorial service following at Riverwood. There will be a private family burial in Rose Hill Cemetery. The Reverends Sam McDonald and Chad Scott will officiate the service.

Born on April 22, 1921, in Winnetka, Illinois, to Mildred Rogers Patterson and Robert Waller Willis Patterson, she married the love of her life, Charles Robinson Jacobs, on March 19, 1942. She and Chuck began their marriage in Charleston, South Carolina, during World War II. Following the war they moved to Meredith, New Hampshire, and on to Wauseon, Ohio where they owned and operated weekly newspapers. After a brief stint in Sarasota, Florida, they moved to Brookhaven in 1958 after purchasing the then named Brookhaven Leader-Times. Over the next 37 years the dynamic pair grew their small bi-weekly newspaper into a regional daily newspaper, serving a four-county area in Southwest Mississippi, until their retirement in 1995. The family sold their newspapers, direct mail and web printing operation in 2012.

In between the never ending deadlines of the newspaper business, where she learned and honed her award-winning photography and writing skills as well as handling the bookkeeping chores she maintained a household raising three boys — Randy, Don and Bill. In her spare time, she was active in community social and civic affairs serving for 34 years as a board member, including multiple terms as board chairman, of the Lincoln, Franklin and Lawrence County Library System. She was appointed to the five-member board of the State Mississippi Library Commission.

She also served as a member of the Willing Hearts Circle where for over 35 years she completed multiple terms of service as a board member of the King’s Daughters Hospital including a term as board chairman. She was appointed to the Mississippi Board of Hospital Trustees.

In 1976 she co-chaired the Lincoln County 1776 Bicentennial Committee, which created the Bicentennial Park in Brookhaven.

She was a dedicated member of the Ole Brook Chapter of the Daughters of the American Revolution; a charter member of the Lincoln County Daughters of the Confederacy; the Colonial Dames 17th Century; The Wildwood Garden Club; the Mother’s Culture Club; the Climbers Club; The Krewe of Ceres; and the Junior Auxiliary where she was awarded the Golden Crown Award. In her later years, she was a member of the Brookhaven Regional Artists Guild (BRAG) and the Friends of the Library.

With a deep love of genealogy, the arts, history, as well as world affairs, she was a seasoned traveler with multiple visits to Central America, South America, Europe, the Near East, Africa and all points in-between. She climbed the Peruvian Andes, rode elephants in India, survived an earthquake in Iran and walked the trails of Nepal. She barged the boat canals of France as well as the motorways of the United Kingdom, Germany and Italy. Realizing she never made it to Egypt, in recent months she plotted a solution.

Pat co-authored two books of local architecture history “Treasures of Brookhaven” and “Lincoln County at the Turn of the Century” with good friend and fellow Brookhavenite Kay Calcote. They also produced two architectural photographic displays of the area — a traveling exhibit shown in libraries in Southwest Mississippi. In her 90s she became an accomplished potter, which she would deny.

Ever the encourager, she made it her mission to find the best in people and to encourage them to seek higher goals in whatever their endeavor.

She was a member of the First United Methodist Church in Brookhaven.

She is preceded in death by her husband of 67 years, Charles Robinson Jacobs; her parents, Mildred Rogers Patterson and Robert Waller Willis Patterson; a brother Robert Waller Patterson Jr.; and an infant son Thomas Orton Jacobs.

She is survived by her sons: Randall Woodruff Jacobs and his wife, Fontaine Richbourg Jacobs, of Friendswood, Texas; Sheldon Truesdale Jacobs of Jackson; William Orton Jacobs and his wife, Amy Alexander Jacobs, of Brookhaven; and two granddaughters, Ann Kirkpatrick Harris and her husband, Neil, of Memphis, Tennessee; and Meredith Alexander Jacobs of Charleston, South Carolina.

The family wishes to thank the nurses and staff of St. Catherine’s Villages in Madison and her sitters, Linda (Angela) Thompson, Lucile Sutton and Robin Moore for their loving support, attention and patience.

In lieu of flowers the family requests donations to the King’s Daughters Medical Center Foundation, The Mississippi School of the Arts Foundation or the Lincoln-Lawrence-Franklin County Library.