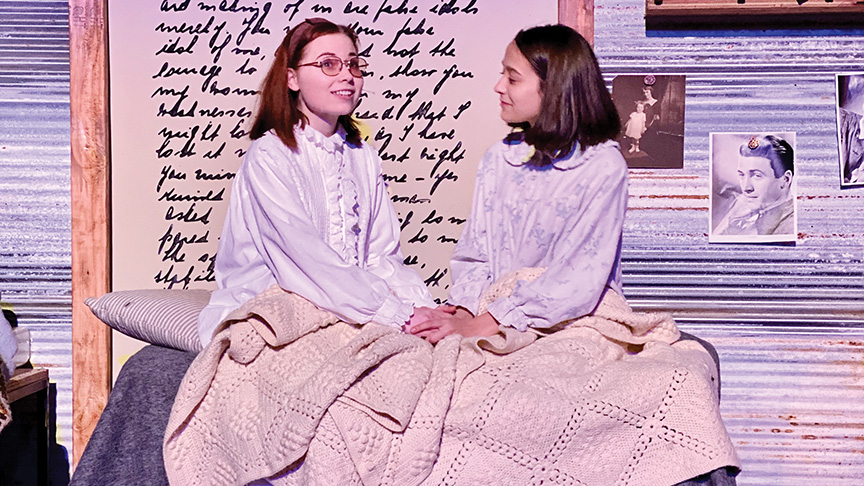 The story of Anne Frank is still moving people today, more than 70 years after her death at a concentration camp in Nazi Germany at the age of 15.

Starting Friday, the Brookhaven Little Theatre will perform “The Diary of Anne Frank,” an adaptation of a play originally written by Frances Goodrich and Albert Hackett and newly adapted by Wendy Kesselman. BLT Executive Director Emily Waterloo said they chose this version of the play because it incorporates new findings from her journals.

The play is based on Anne Frank: The Diary of a Young Girl. Frank was a normal girl living in the Netherlands during the german occupation. She was 13 when she began writing in her diary. She also happened to have a Jewish heritage.

“It’s a story of one of the many families who went into hiding during World War II,” Waterloo said. “It shares the day-to-day life that they lived, to stay quiet and not be found out.”

Frank wasn’t an action hero. She was a little girl living in the real world during a dangerous time. But for Waterloo, her resilience in the face of all that is what makes her story so powerful even today.

“Her resilience and hope that it’s laced between every line that she writes,” she said “Her feelings are very raw, and she’s able to communicate such a beautiful picture of what things were really like. Even during such a scary time she had her first crush and — I don’t know — I think it tells us many different stories within the story.”

“The Dairy of Anne Frank” will feature a cast of 13 characters, including Holly Miles of Ridgeland as Frank, who has also appeared in “Les Miserables, School Edition” and in various school and church productions.

Set during the holocaust, the story deals with sensitive subject matter, and may also contain sudden loud noises, theatrical fog, strobe lighting, scenes of violence and the use of unloaded weapons.

Waterloo said that, while there is no inappropriate language and the play is suitable for children and adults, parents may need to explain the story beforehand to younger children who don’t know what to expect.

Tickets are $20 and can be purchased at www.brookhavenlittletheatre.com. Waterloo said that because of the educational nature of the show, teachers and students can enter a promo code SCHOOL for a $10 discount.

“You’ll laugh, you’ll cry and you’ll leave a changed person,” she said. “We’ve got some BLT veterans and some new faces. It’s going to be a fantastic show.”