‘Faith over fear to the end’ — High schooler helps cancer patients, families while fighting cancer herself 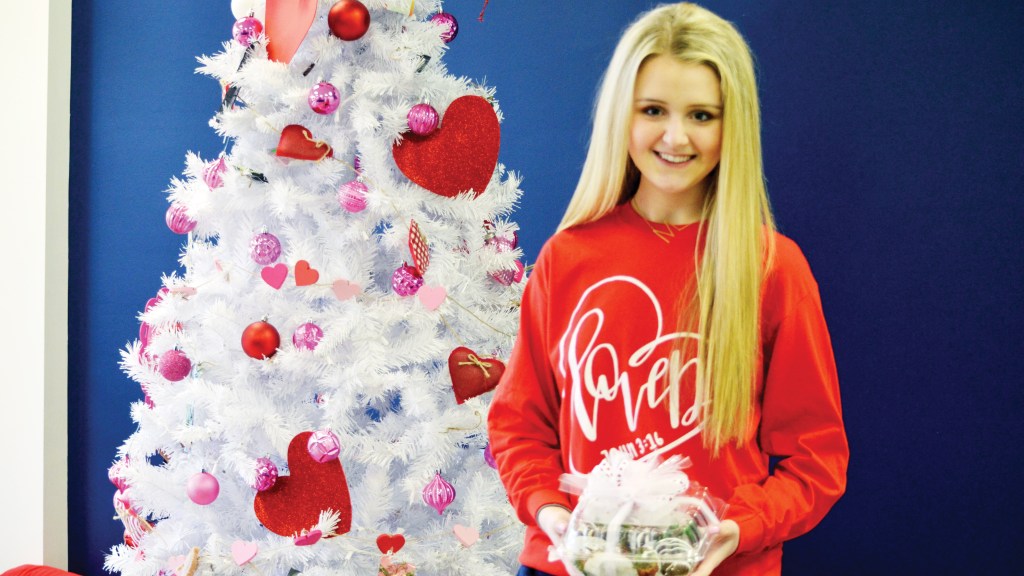 Photo by Donna Campbell Madeline King wears one of the T-shirts she sells to raise money for families at Blair E. Batson Children’s Hospital and holds chocolate covered strawberries she’s selling to raise money for the American Cancer Society through her Relay For Life team, Team Madeline.

Madeline King doesn’t need to wear a red T-shirt to feel the love.

Sporting a shirt she designed — it says Loved and John 3:16 — this courageous 16-year-old is raising money for families at Blair E. Batson Children’s Hospital, a project she started before her own cancer diagnosis that has put her in and out of the Jackson hospital many times in the past eight months.

Through the love and support of her classmates at Brookhaven High School, her church family at Harmony Baptist where Owen King pastors and the community as a whole, she’s raised thousands of dollars for food vouchers so parents of patients can buy meals to eat when their children eat.

Beth King said parents can get two snacks free each day at Batson, but Madeline wanted to provide meals for them as well. It’s important to her that families get to eat together and have that quality time, even if they’re in a hospital room.

“If these kids are going through a hard time and they can’t eat, if this is their last time together they should have a meal together,” King said. “Instead of the mama and daddy eating a snack, or not having  something to eat, they could have a meal with their child.”

In August, doctors removed her left and right thyroids and 76 cancerous lymph nodes.

Love is what pulls her through, her mother said.

“From everything that she’s gone through. I don’t see how people go through situations like this without him. You confide in the healer. God is love,” Beth King said.

Love is also what comforts King.

“I consider myself a very strong person, but when you see your child hurt and crying out because they’re in so much pain” you turn to Jesus, King said. “He’s the one who sees us through.”

Madeline keeps up with her classes at BHS, though sometimes she has to complete assignments with the help of a teacher who is assigned to the cancer ward at Batson. She also takes some of her classes online through Copiah-Lincoln Community College.

Her most recent health scare was a blood clot, hematoma and active bleed that had her parents rushing her to Batson.

Because of the chemistry of her blood due to the cancer, Madeline is more prone to blood clots.

Doctors evacuated the blood causing the problem through a small incision in her left leg, but the attack also left her paralyzed in that leg. She wears a brace for support, but is able to walk. Feeling is slowly coming back to the area between her thigh and her ankle, her mother said. Her therapist said she’ll probably recover about an inch of feeling in her leg each month, which is not encouraging news for a girl who loves tennis.

“You get bummed that you can’t do what you used to do,” she said.

She’s also having issues with her breathing and recently visited a pulmonologist at Batson.

“She still feels like she is climbing a mountain,” King said.

None of that is slowing her down in her goal to make a better life for children and their parents at Batson.

“If you just walk the halls of Batson you know how blessed you are,” King said.

Madeline is also raising money for the American Cancer Society through Relay For Life of Copiah Lincoln. She’s selling chocolate covered strawberries for Team Madeline and if she has any available today, they can be ordered by calling her mother’s number as well.

With all the medical bills the family is facing, the young woman is giving money to help others.

She has faith her family’s financial burden will be lifted, and believes she needs to do what she can for those who need help.

“Whenever you give back, you still receive,” she said.

Madeline’s mother supports whatever her daughter wants to do. She believes Madeline is destined for great things.

“Faith over fear to the end,” King said. “We’re going to finish this journey. There’s no doubt in my mind, God’s carrying us through this journey for a reason. I have no idea what the reason is, but we’re going to look back in years and we’re going to say ‘Now I get it’ but right now I don’t understand why she’s going through so much.”

King would like the answer, but she’s practicing patience.

“We’re going through this for a reason,” she said. “What am I supposed to be gaining from this? Right now, I don’t see it. I just see my child who wants to be a 16 year old, who wants to be in school with her friends, who wants to play tennis. And I want that for her.”