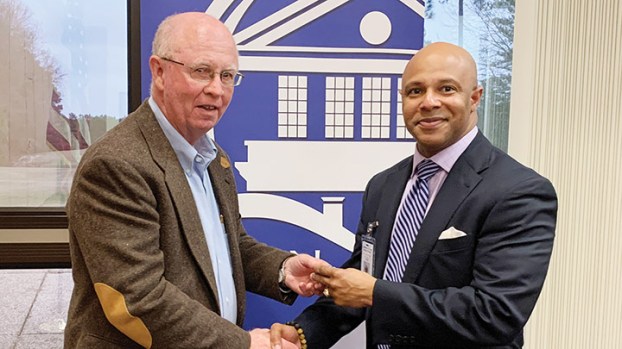 Photo submitted Copiah-Lincoln Community College Board of Trustees Chairman Tommy Sasser, left, presents a Co-Lin pin to Titus Hines, welcoming him to the Board of Trustees. Hines, who became supervisor of the Lawrence County School District in January, received the pin at the February meeting of the Co-Lin board.

From growing up as a self-described ‘Delta Boy’ to earning a doctorate in education, the new superintendent of the Lawrence County School District says he is excited about his appointment to the Copiah-Lincoln Community College Board of Trustees.

Titus Hines, called a “doctor” in educational circles, became the Lawrence County schools superintendent in January and was named to the Co-Lin board earlier this month.

“I’m honored, first of all,” Hines said of the board appointment.

Hines also is looking forward to helping students in the transition from high school to college, and in helping them see what Co-Lin has to offer.

His school district is based in Monticello.

The Greenville native came to Lawrence County after serving as school administrator for 10 years at Perry Central High School in New Augusta.

The Lawrence County School District has more than 2,000 students in grades K-12.

Before his job at Perry Central, Hines taught social studies for eight years at Canton High School in Canton.

While at Canton High, he also spent his last two years and two months as site administrator through a 21st Century Community Learning Center grant. CCLC grants provide federal funding for site administrators to establish community learning centers that give academic, artistic and cultural enrichment opportunities to students and their families.

Hines has two adult children from a previous marriage, one grandchild and another on the way. He enjoys the new season in family life.

A Navy veteran with about five years of service, Hines said his work gives him little spare time, but he enjoys spending time with family and traveling. He credits the military, in part, with his love of traveling abroad and stateside.

Hines earned a Doctor of Education degree in educational leadership from William Carey University in 2017, and in 2019, he earned superintendent certification through the Mississippi School Board Association’s Prospective Superintendent Leadership Academy.

He believes his life experiences and post-graduate training will help him on his job and as a Co-Lin board member. He has advanced training in focusing on the social and emotional aspects of students as well as their academic training.

He earned an educational specialist degree, an Ed.S., in educational leadership from Mississippi College before studying for his doctorate.

Hines said he was heavily involved in church activities before his recent move to Lawrence County. He said he has not found a home church yet, but plans to.

He is involved in the Hattiesburg Chapter of Alpha Phi Alpha fraternity, which provides community services to the Pine Belt.

Also, he has been a member of the Mississippi Beta Club since 2013.

As a school district supervisor, Hines said he looks forward to bringing about positive changes.

“As a principal, my hands were tied at times,” he said, “but I have a little more leeway as a supervisor, and the availability of resources.”

A four-hour standoff at Dollar General ends with two arrests