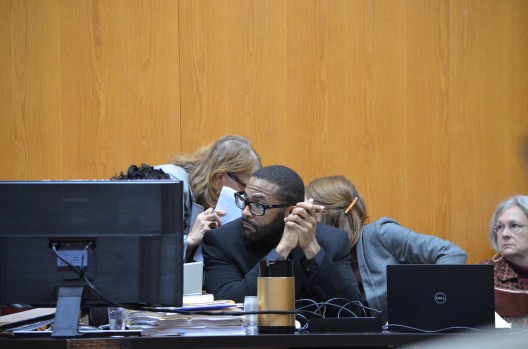 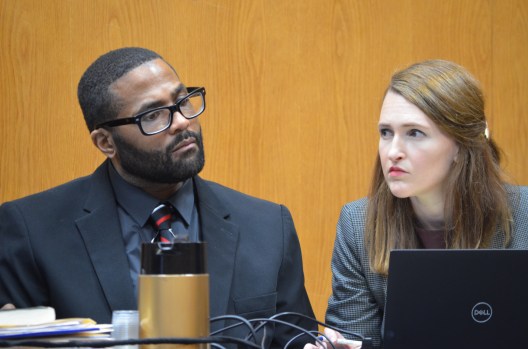 Photo by Donna Campbell/The Daily Leader Cory Godbolt listens Sunday as his ex-wife, Sheena May, talks about text messages they exchanged May 27, 2017. Pictured are, from left, Godbolt and defense attorney Katherine Poor. 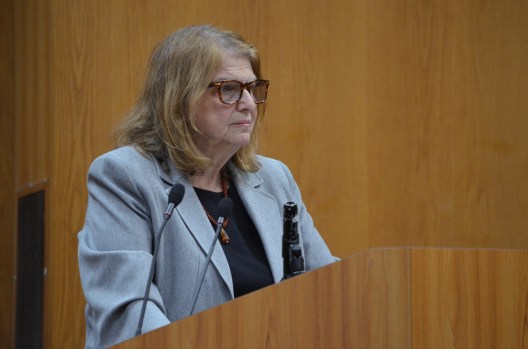 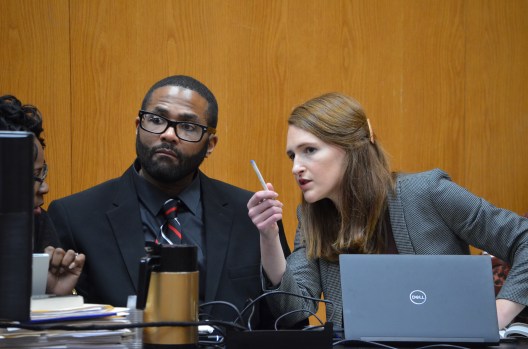 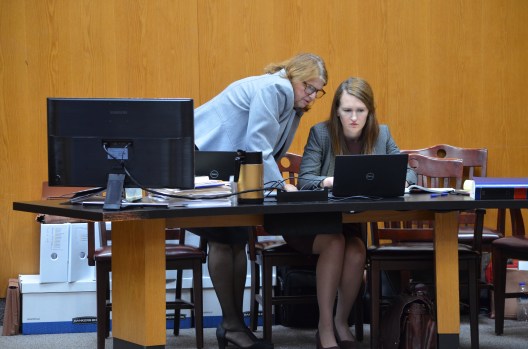 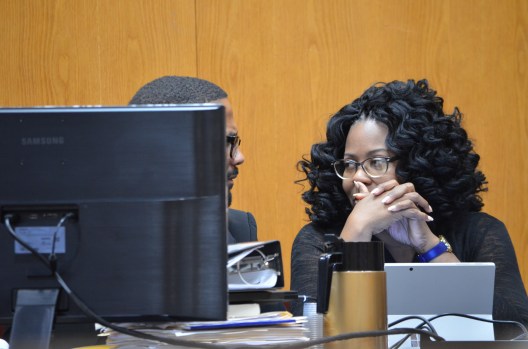 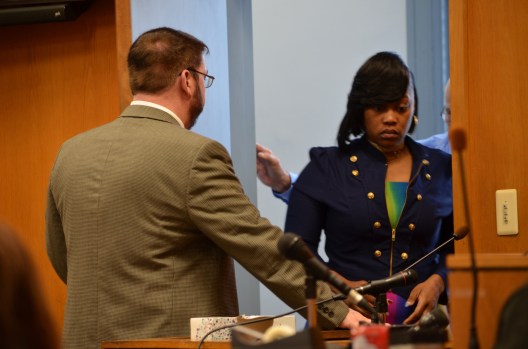 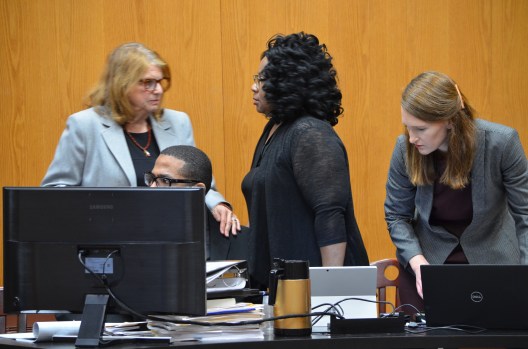 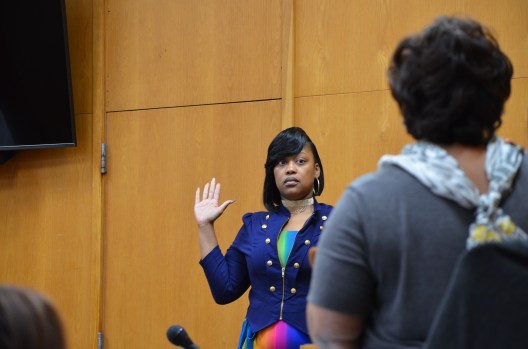 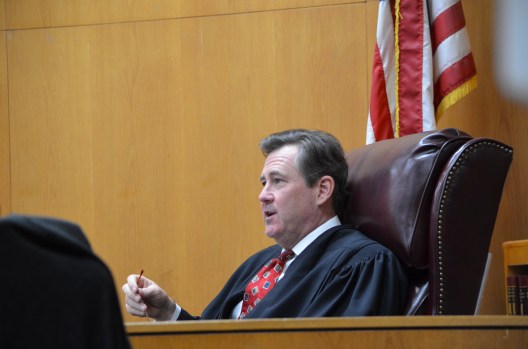 Sheena May took the stand Sunday afternoon to testify against her ex-husband in his capital murder trial underway in the Pike County Courthouse in Magnolia.

Cory Godbolt, 37, is accused of shooting to death eight people including a Lincoln County deputy who arrived at a home in Norfield on a domestic abuse call on Memorial Day weekend in May 2017.

May, who said her divorce from Godbolt was final last week, was the only witness called Sunday on Day 2 of the trial.

Alison Steiner, attorney with the Office of State Public Defender’s Capital Murder Division, made several attempts to keep May from testifying against her former spouse. Assistant District Attorney Rodney Tidwell said the state believed Godbolt’s intention for his actions the night of May 27 was to “punish Sheena Godbolt (May) and any of her friends.”

Tidwell said Godbolt’s motive that night was not to protect his daughter, My’Khyiah, from the unsolicited touches of a cousin two years older than she was as defense attorney Katherine Poor said in her opening statement Saturday, but rather to continue his show of control over his wife and family and his requirement of her obedience to him.

May described the life she shared with Godbolt prior to the shootings. They’d been together 17 years, and married for seven of those. They had two children, My’Khyia, known as Bubble, and Cory Jr., known as Buddy.

They lived in a trailer on Brister Street in Bogue Chitto, which was burned to the ground soon after Godbolt’s arrest in 2017. Her mother and stepfather, Barbara and Vincent Mitchell, lived a few minutes away on Lee Drive in Norfield.

She said they separated many times over the years, but he’d tell her he loved her and promise to change.

A year before the shootings, she said he asked her to press charges against her mother and stepfather because he felt they weren’t watching Bubble and Buddy well enough and had allowed Bubble to be touched inappropriately. When she wouldn’t, she said he beat her and choked her so bad she had to go to the hospital.

She moved out, into her own home, but he asked her to reconcile. She moved to her mother’s and began the process of coming back.

After she moved back, the cousin accused of touching Bubble would come to their house to play basketball nearly every day, she said, often eating dinner with them. The only time the incident was mentioned was when she and Godbolt were sitting outside watching their children and her nephew play basketball. She said Godbolt called the boy over to them and told him he should be Bubble’s protector and to not touch her again.

“We never brought it up again,” she said.

She said near the end of their relationship, he wanted her to change into what he considered more modest clothes — which was not unusual — but she refused. She said he tried to drag her into the house and her aunt, Brenda May, tried to verbally stop him.

She said she broke away and walked to Godbolt’s brother’s house nearby, with Godbolt following her.

On the day of the shootings, she had been living at her mother’s home for two months.

“I chose my life over my marriage. He was very abusive to me, controlling,” she said.

She went to Godbolt’s to pick up the children and he told her to come back because they were helping with yard work. Later, Bubble texted her to come get them since Godbolt wasn’t there. She took them to the Mitchells and they were eating when Godbolt came to get them. He took their food with them. He dropped them off later that night so they could watch fireworks.

She’d told him by text that she’d call the police if he came back. When her sister told her Godbolt was outside she called 911 and told her children to stay in the bedroom she shared with them.

“I called the police because I was afraid of him,” she said.

She went into the living room and Godbolt was coming in through the kitchen.

“He told my mom it was time for them to listen,” she said.

May said someone came into the kitchen and they looked then turned back to Godbolt in time to see him pull a gun from behind his back and shoot Durr in the face.

“He stepped over the officer and started shooting at Brenda,” she said.

She ran to the bedroom and knocked a window out, helped her children out and the three ran from the home, climbing over a fence to get away. She called 911 from a neighbor’s house.

She then called her best friend Tiffany Blackwell to tell her what Godbolt had done. Blackwell and her husband Shon, Godbolt’s cousin, would sometimes eat dinner out with May and Godbolt when they were together.

“She made sure we were at Sunday school and Bible class,” May said.

But Godbolt had “started hating her” because of her close friendship with May.

May testified that she’d returned to Lee Drive and Blackwell was sitting with her in a car when she got a call that her son, 18-year-old Jordan Blackwell, had been shot at her home on Coopertown Road.

Around the same time, Godbolt posted messages on Tiffany Blackwell’s Facebook through May’s account, which he had access to. Jurors were shown a screenshot of it. One said, “Pay back b—-, f— up my family, now it’s yours hoe.”

During the four-hour testimony, Steiner showed May a photo of herself with her children and Godbolt that had been taken in front of a Christmas tree at her son’s sports award banquet at school. Steiner implied that the marriage must have had good times, too, because they looked happy in the photo.

“Just because it’s on Facebook, doesn’t make it real. Looks can be deceiving,” May said.

Steiner said Godbolt’s parents separated before his birth and his father was later killed by the woman he left Godbolt’s mother for. She said May was his chance to have a family.

When Steiner brought up the photo again later, May said it was a lie.

“You can paint a picture like it’s the happiest family in the world,” she said.

May’s testimony will continue Monday — Presidents Day — when the trial enters Day 3. Strong has called for weekend and holiday proceedings so the DeSoto County jury won’t be sequestered longer than necessary.