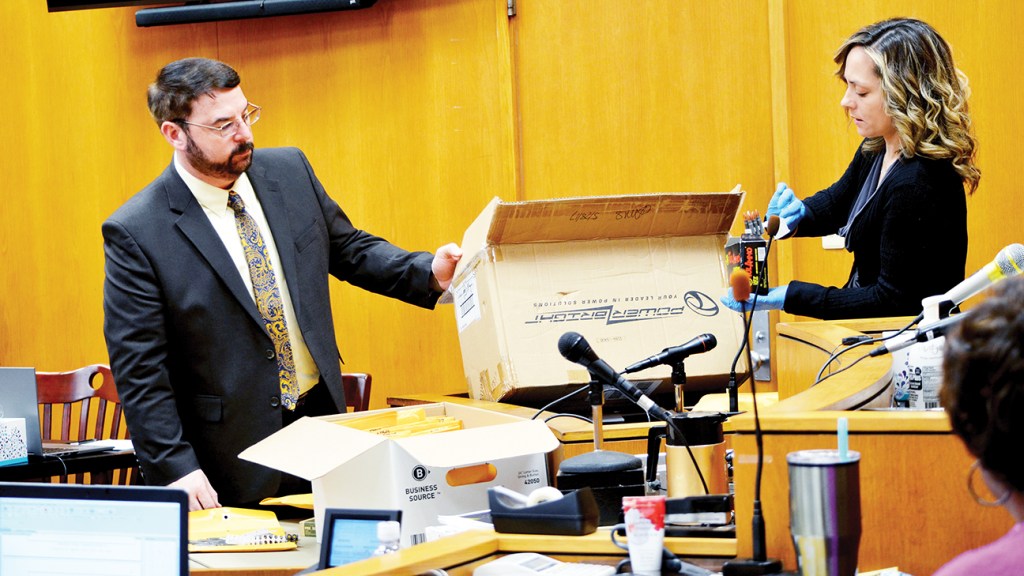 Photo by Donna Campbell/The Daily Leader Assistant District Attorney Robert Byrd and Mississippi Bureau of Investigations crime scene investigator Anna Savrock go through a box containing several containers of ammunition found in Cory Godbolt’s station wagon that was left at Lee Drive after a deputy and three members of his wife’s family were shot and killed during Day 3 of Godbolt’s capital murder trial.

My’Khyiah Godbolt testified Monday that her father, Cory Godbolt, “was very mean” and beat her and her mother often during her childhood.

Since the capital murder trial started Saturday in the Pike County Courthouse in Magnolia, the defense has tried to paint a picture of a man trying to keep his family together and who was worried about his daughter’s safety. Defense attorney Katherine Poor said in her opening statements that Godbolt didn’t want his daughter to be around her cousin, two years older than her, because he considered him a predator who had tried to touch her inappropriately when she was 8 or 9 years old.

But on the stand Monday, 12-year-old My’Khyiah, who asked to be called by her nickname, Bubble, said she and her cousin were often together in the two years before the shooting May 27, playing basketball and even sharing family meals at her house. They also stayed overnight sometimes at her grandparents’ home on Lee Drive.

Bubble didn’t look at her father during her 45-minute testimony, though he kept his gaze on her.

Godbolt, 37, appeared agitated, shaking his head and pursing his lips tightly when she described an attack on her with a plastic bat once when they were practicing baseball outside.

She said he became angry when she asked to take a break and beat her repeatedly with the bat. She yelled at relatives nearby, “Help, he hurt me. Call the police.”

She said he forced her inside the house and told her, “If you ever embarrass me like that again, it’s going to be worse.”

Bubble told Assistant District Attorney Brendon Adams that on May 27, 2017, she’d seen Godbolt watch gun videos about reloading and firing an AR-15 like the one he owned. She also recalled an AK-47 he owned and a pistol. One of “the big guns” was on his bed that day before he took the two children to their grandparents’ house on Lee Drive for a barbecue.

Later, when he’d brought them back home, he told her and her younger brother, Cory Jr., that he would not let anyone take them from him then he took them back to their grandparents’ house about 8 p.m. so they could watch fireworks.

“He told us he would die or kill before he let us go with anybody else,” she said. “He was not hisself.”

Jurors also heard testimony from Tamayra May, the adult daughter of victim Toccara May, who hid with her 11-year-old sister in her mother’s car when the shooting began. The jury listened to her 911 call, begging the dispatcher to send help.

They also heard from Master Sgt. Andrew Montgomery with the Lincoln County Sheriff’s Office, an investigator and member of the Special Response Team, who testified that officers were at the Lee Drive address for about five hours, thinking Godbolt was still inside the mobile home. He said they discharged gas canisters into the home to flush Godbolt out, not knowing he had already gone.

Later in the day, Anna Savrock, a crime scene investigator with the Mississippi Bureau of Investigations’ Biloxi office, identified physical evidence removed from Godbolt’s station wagon that was abandoned in his mother-in-law’s driveway May 27, including a duffle bag with multiple boxes of bullets. She also described video of the crime scene that included footage of Lincoln County Sheriff’s Deputy William Durr lying face down in a pool of blood as well as the bodies of Barbara Mitchell near him and Brenda May and Toccara May on the kitchen floor.

Savrock pointed out in a photograph shown that Durr’s arm was under his torso and the blood smears on his inner arm showed there had been movement. She said his pistol was in his holster and it was locked. His shoulder mic was not in its holder.

Godbolt kept his head down when photographs of the four Lee Drive shooting victims were shown.

The trial began Saturday with opening statements. Defense attorney Katherine Poor, her hand resting on Godbolt’s shoulder, said the defendant grew up in a broken home with parents who separated before his birth. When he was a teenager, his father was shot and killed by his stepmother, a woman his father had left his mother for. He met Sheena May a while later and they would spend the next 17 years in a troubled relationship. Married for 10 of those years, the two fought often and Sheena would run to her mother’s house until they reconciled.

Jurors saw cell phone video shot by a newspaper reporter on the scene at his capture on East Lincoln Road following the shooting deaths of the eight people.

Sheena May took the stand Sunday afternoon, announcing her divorce from Godbolt was final last week.

She said she suffered for years at his hands, leaving when he beat her but coming back because he swore he’d change, even after he choked her and beat her so bad she required treatment at the hospital.

She said near the end of their relationship, he wanted her to change into what he considered more modest clothes — which was not unusual — but she refused. She said he tried to drag her into the house and her aunt, Brenda May, tried to verbally stop him.

On the day of the shootings, she had been living at her mother’s home for two months.

“I chose my life over my marriage. He was very abusive to me, controlling,” she said.

She said she told him not to come to her mother’s home where she was staying with their two children on the night of May 27. When he arrived around 11 p.m., her aunt, Brenda May, called the police.

When Durr arrived and told him to leave, Sheena May said Godbolt drew a pistol from behind his back and shot the peace officer in the face.

“He stepped over the officer and started shooting at Brenda,” she said.

May said she and her children jumped out of a bedroom window and ran through the woods to a neighbor’s house and called 911. Later, her best friend, Tiffany Blackwell, came to Lee Drive at May’s invitation, leaving her 18-year-old son Jordan Blackwell with his cousin, 11-year-old Austin Edwards, and young relatives and friends at her home on Coopertown Road.

It was the last time Blackwell saw her son and nephew alive.

The trial resumes Tuesday at 9 a.m. The DeSoto County jury is sequestered during the trial. Jurors consists of 11 women and one man including two stay-at-home mothers, 35 and 36; a school counselor, 33; an electric company business manager, 46; a payroll clerk, 53; a retired FedEx worker, 62; and IT administrator, 47; a mental health worker, 24, a church office administrator, 41; a customer service agent, 65; and a county school education assistant, 37. The man is a 53-year-old warehouse worker.