Theater star returns to his roots at MSA, teaching and performing 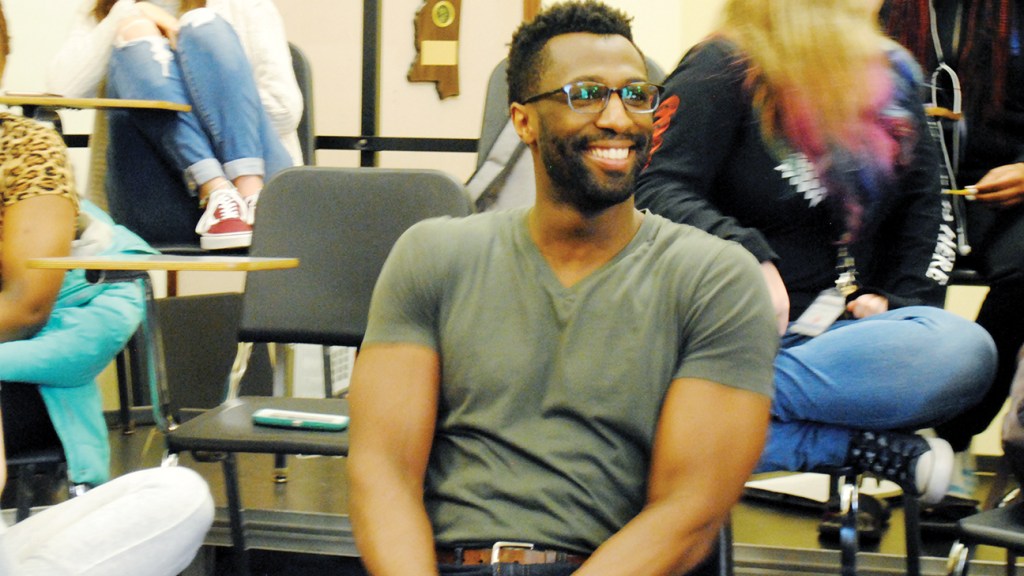 Photo by Aaron Paden MSA alum Ezekiel McCall is in residence this week at the school.

Ezekiel McCall was one of the earliest students of the Mississippi School of the Arts, and he has gone on to perform in theaters across the country. This week, McCall has returned to Brookhaven where he will bring his own dinner performance to an MSA Foundation fundraiser Friday.

Born in Greenwood, McCall has made a career out of his passion for choir and theater. He described choral music as the great joy of his life. In 2004, he joined MSA’s choir during its second year in operation. In those olden days, students would submit VHS audition tapes to the school.

“My friend had a big ol’ camcorder thing on a tripod, and I stood in front of the wall and I just — no music — just sang,” McCall said. “That was the beginning of what I’m doing now. I sent that tape and got in.”

At the time, McCall said he’d practiced several different kinds of music — especially gospel — but he had no formal training. The experience was eye-opening.

“After I got here, Mr. Patton (Rice) was kind of the inception of, ‘Whoa, people can do that with their voices,’” McCall said. “This was also his first year of teaching back in 2004. Since that time, I’ve grown and grown. I believe in the process.”

McCall graduated from MSA in 2006, and after receiving an undergraduate degree from Mississippi College he began work on his masters at Cincinnati Conservatory of Music.

“Those were my wilderness years,” McCall said. “I spent three years in Cincinnati and went through a lot of hardship. But the hardship made me strong. I often tell people, it was in Cincinnati that I became a man.”

McCall didn’t complete his degree in Cincinnati. The pressure was too much, he said, and he withdrew during his fourth semester. For a year and a half he took a break from singing, and it made him miserable.

“Something said it was time to go back home,” he said. “In 2015, I came back to Mississippi to attend USM in Hattiesburg. I refer to that move as a slingshot. You’ve got to go back to get that momentum to shoot forward. And that’s what happened.”

McCall has played starring roles in “Phantom of the Opera,” “Beauty and the Beast” and “Ragtime.” He’s currently pursuing parts on Broadway in New York. But he often visits schools to give master classes, which he did Tuesday, back in Rice’s class after returning home to MSA.

“That part is very important to me,” he said. “I see myself in all of the students’ eyes. I was that 15- or 16-year-old that knew nothing but wanted to know and wanted to do the work. And, wow, I’m 32 years old now. This place here instilled that beginning foundation.”

McCall said he’s proud of the work he put in to get where he is now, and advises young people that hard work — more than talent — is the key to success in the arts or any other endeavor. And McCall said he isn’t through putting in the work.

“I’m still not where I want to be,” he said “I still have to work right now. My level now, I’m auditioning for the Broadway shows that are happening. At that level, everybody’s talented. So what’s going to set you apart from the thousands of other talented people vying for that spot is oftentimes that hard work factor. how hard are you willing to work in the trenches to stand out?”

Tickets to see McCall Friday can be purchased in person or from the MSA website at www.msabrookhaven.org. The MSA Vocal Department will be the opening act.