Witness testifies to defendant’s confession ‘I done shot the police’ 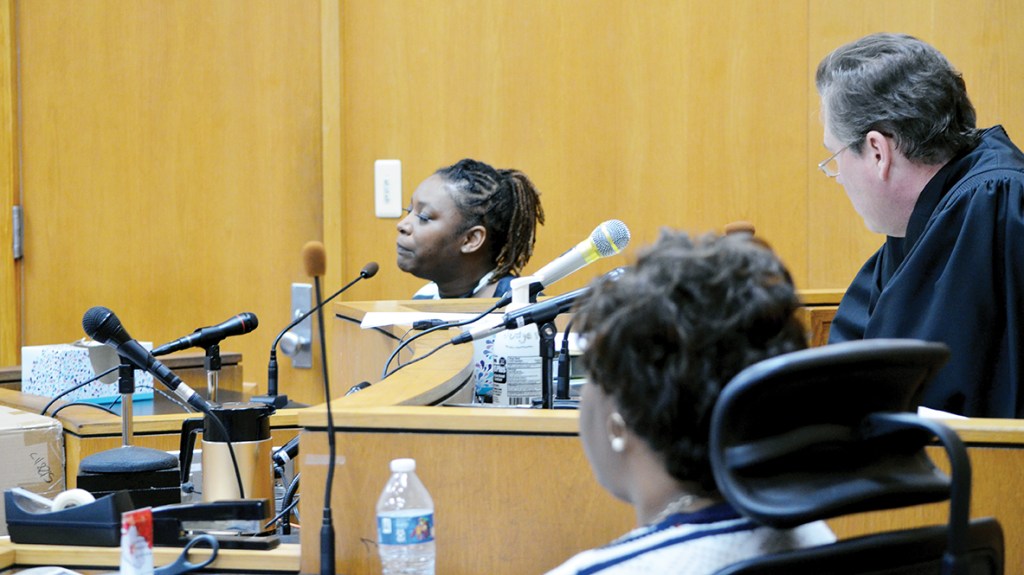 LaPeatra Stafford drove Cory Godbolt from Bogue Chitto to Magnolia and back on the night of May 27, 2017, begging him to turn himself in to authorities after he told her he killed a deputy.

Stafford testified on Tuesday in Day 4 of the trial.

On the night of May 27, 2017, she was in her kitchen, filling a slow cooker with a meal she planned to take to church with her that Sunday, when she heard a knock at the door of her Lee Drive home.

Stafford, a congressional liaison with the Department of Veterans Affairs, would learn too late it was Cory Godbolt at the door, which she opened because he said he was AC, her neighbor. When he stepped out of the shadows she realized it was Godbolt, someone she’d known for years.

He needed to get out of the area, and wanted her to take him. Her three children were asleep in their rooms so she tried to give him the keys.

With two assault rifles tucked under one arm, he promised he wouldn’t hurt her.

They headed south on I-55 and he talked about what he’d done. They parked behind a hotel on Veterans Boulevard in McComb so he could use Stafford’s phone to call his sister, Shelly Godbolt Porter. He asked his sister to get Lincoln County Sheriff’s Deputy Chief Johnny “Scooby” Hall on the phone. Hall is Godbolt’s cousin.

“He was telling them that he was not coming out of the house,” Stafford said.

She said Godbolt admitted it was a stall tactic.

“They think I’m still in the house,” she recalled him telling her.

They continued south on I-55 ending up at Marvin Brumfield’s home in Magnolia. They sat with him inside the house for a while as Brumfield, a longtime friend and co-worker of Godbolt’s, tried to convince him to surrender. Godbolt talked about wanting to go to Rev. Eugene and Cora Edwards’ home in Bogue Chitto, but decided not to. Edwards is the pastor of New Zion Union Missionary Baptist Church. The Edwardses are the grandparents of Jordan Blackwell and Austin Edwards, who Godbolt is accused of shooting to death at the Blackwell home on Coopertown Road.

Stafford said Godbolt appeared calm as they were leaving Brumfield’s. He hugged her and told her he was sorry for getting her involved.

The three left together with Stafford still driving and parked at an exit near the Lincoln County line. That’s when Stafford learned about the murders of Barbara Mitchell, Brenda May and Toccara May.

“He said he knew the people at Lee Drive were dead because he used assault weapons,” she said.

Godbolt told Stafford and Brumfield that Vincent Mitchell was “a coward for leaving his wife.”

Spooked by a police car that drove by, Godbolt made Stafford drive to Shon and Tiffany Blackwell’s home on Coopertown Road. Blackwell, an associate pastor at New Zion Union Missionary Baptist Church with his father-in-law, is Godbolt’s cousin. Godbolt wanted to talk to Blackwell about his wife, Tiffany Edwards Blackwell, who was best friend’s with Sheena May, who was Godbolt’s wife at the time. Their divorce was final last week.

May testified Monday that Godbolt had come to hate Tiffany Blackwell and believed she was interfering with his marriage.

Brumfield on the stand later would talk about how he tried to wrestle with Godbolt to keep him from going into the house.

Porter, Godbolt’s older sister, also appeared as a witness Tuesday. She said she had not been feeling well and was headed to bed at 11:45 p.m. when she got a call from Godbolt from what she would learn later was Stafford’s phone.

“Baby girl, I f—‘ed up. I shot an officer and Faye and Brenda,” she said he told her, referring to his mother-in-law, Barbara Mitchell, and her sister, Brenda May.

Porter tried to talk him into turning himself in.

When she called Hall for Godbolt and listened in on the three-way conversation, she heard him tell Hall the police couldn’t come in (referring to the Lee Drive house where authorities believed Godbolt to still be).

“He was trying to get him to turn himself in. He said the police can’t come in,” she said. “He would have to shoot them because they would have to kill him.”

The last time he spoke to Godbolt that day — which was before the Coopertown shootings — he told her, “Take care of my kids for me. You gonna come see me?”

On the stand, Brumfield said he talked to Godbolt around daybreak. He was still trying to get him to surrender.

The trial resumes Wednesday at 8:30 a.m.