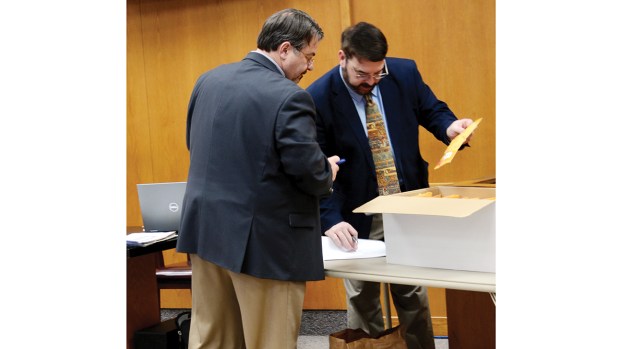 Photo by Donna Campbell/The Daily Leader Assistant District Attorneys Rodney Tidwell (left) and Robert Byrd organize ballistic evidence and weapons Friday that were recovered at East Lincoln Road where two people were shot and killed May 28, 2017, in an overnight rampage. The state is on Day 7 of testimony in Cory Godbolt’s capital murder trial in the Pike County Courthouse in Magnolia. 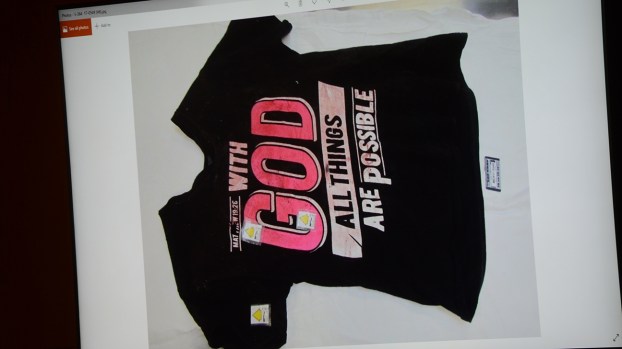 Photo by Donna Campbell/The Daily Leader Yellow stickers mark bullet holes in the T-shirt worn by Brenda May when she was shot May 27, 2017, at her sister’s home on Lee Drive in Bogue Chitto. The shirt was one of several crime scene and autopsy photos shown Friday on Day 7 of Cory Godbolt’s capital murder trial in the Pike County Courthouse in Magnolia. 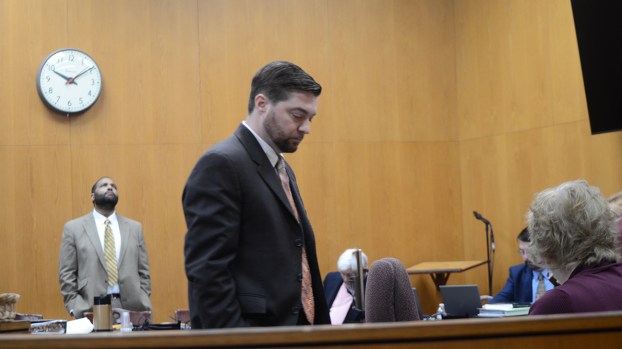 Photo by Donna Campbell/The Daily Leader Assistant District Attorney Brendon Adams talks to the court reporter during a break in testimony Friday while defendant Cory Godbolt waits for his attorneys on Day 7 of Godbolt’s capital murder trial in the Pike County Courthouse in Magnolia.

A forensic pathologist testified Friday in the capital murder trial of Cory Godbolt that the peace officer dispatched to the Lee Drive home for a domestic dispute may have lived after he was shot point blank in the mouth by the gunman.

Godbolt kept his head lowered as photos of Lincoln County Sheriff’s deputy William Durr were shown on Day 7 of testimony at the Pike County Courthouse in Magnolia.

Durr, Barbara Mitchell, Toccara May and Brenda May were allegedly shot to death by Godbolt May 27, 2017, before the defendant allegedly killed 18-year-old Jordan Blackwell and 11-year-old Austin Edwards at Blackwell’s home on Coopertown Road in the early morning hours of May 28, 2017, and then Ferral and Sheila Burage at their home on East Lincoln Road a few hours later. He was arrested near Super Jack’s as he walked from the Burages’ house.

On Friday, the jury and a courtroom of about 75 people saw autopsy photos of Durr, Brenda May and Blackwell. Circuit Judge David Strong issued a warning to the crowd and asked anyone to leave if they didn’t want to see them. At least 10 people exited.

J. Brent Davis with the state medical examiner’s office said Durr had been shot three times — in his face, his back and the back of his head. Earlier in the week, Sheena May, Godbolt’s ex-wife, testified she saw Godbolt pull a gun from behind his back and shoot Durr in the face.

“He stepped over the officer and started shooting at Brenda,” she said Sunday.

Davis said small hemorrhagic marks on Durr’s face produced by the impact of unburned or partially burned gunpowder particles — called stippling — signifies the assailant was less than 3 feet away from the victim when the gun was fired. The autopsy photo shows an exit wound on the back left side of Durr’s neck.

Davis said all gunshot wounds are potentially fatal, but in his opinion, the face shot wouldn’t have killed the officer.

“With medical treatment, could he have survived this?” Assistant District Attorney Brendon Adams asked.

The shot to his back also could have been treated and may not have been fatal, he said.

However, the shot to the left side of his head, and the exit wound to the top of his head, killed the officer instantly, he said. Adams showed a photograph of skull fragments on the 70-inch TV screen on the courtroom wall and Davis said he tends to see injuries like that from high-powered rifles.

The crime scene photo of Durr lying on his stomach showed transfer blood on his arm, which Davis said reveals the officer’s arm moved against a bloody object.

An imprint of the deputy’s wedding ring on his palm was also shown. Durr’s widow, Tressie Hall Durr, testified earlier in the week that the deputy had not removed the silicone ring in over a year since purchasing it as a replacement wedding band.

The state will likely try to prove that Durr was alive and moving when they say Godbolt went outside and came back into the home with two rifles — a Serbian 7.62×39, an AK-47, and a Windham .300 Blackout, an AR-15, two weapons that were recovered at the East Lincoln crime scene, and shot Durr in the head with one of them, killing him instantly.

The jury also saw autopsy photos of Blackwell and May that showed multiple bullet entry and exit wounds to torso, arms and head.

The state will likely rest early next week. While the state has brought in dozens of witnesses, the defense plans to put only a few on the stand.