Defendant: ‘I am completely sorry and heartbroken about that deputy’ 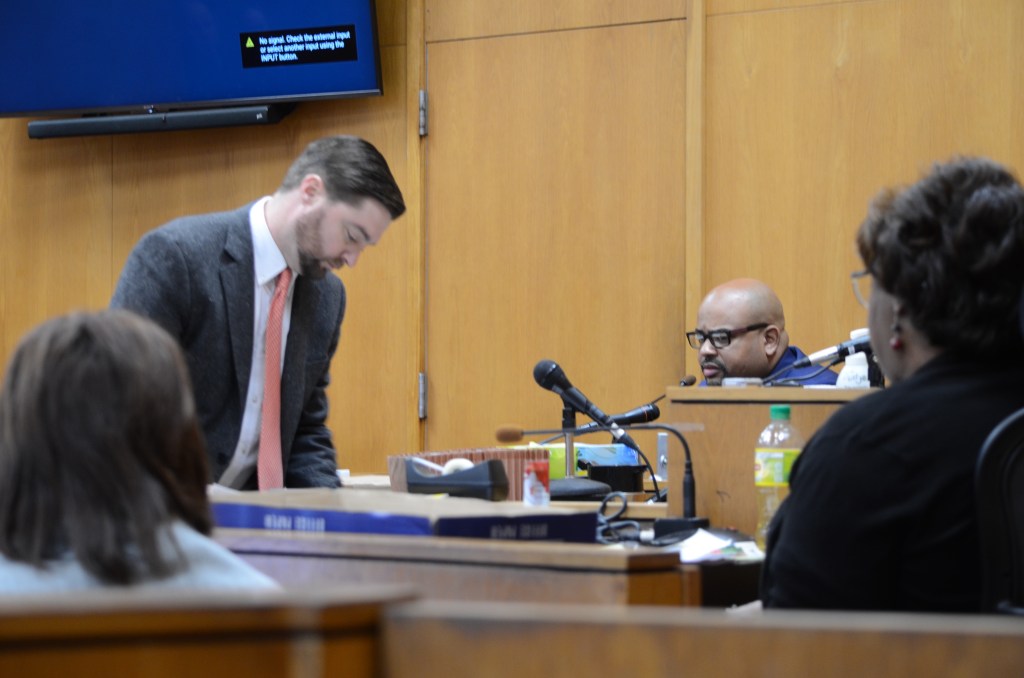 Photo by Donna Campbell/McComb Police Chief Damian Gatlin testifies Sunday on Day 8 of the capital murder trial of Cory Godbolt. Gatlin, being questioned by assistant district attorney Brendon Adams, was on the SWAT team for the Lincoln County Sheriff's Office, during the fatal shootings May 27-28. 2017.

Defendant: ‘I am completely sorry and heartbroken about that deputy’

They’re seeing them, too.

Jurors Sunday saw taped cell phone video footage of Godbolt, 37, sitting in handcuffs, bleeding from a gunshot wound to his right arm. He was arrested near the scene of the third set of fatal shootings May 28, 2017.

He told DeLa Garza to check his daughter’s cell phone and look at the text he’d sent his wife, Sheena Godbolt. She is now divorced and uses the name Sheena May. “I wasn’t going to let the police tell me I’m not going to see my children.”

He is accused of killing Lincoln County Sheriff’s deputy William Durr, his mother-in-law Barbara Mitchell, his sister-in-law Toccara May and her aunt Brenda May at Mitchell’s home on Lee Drive, 11-year-old Austin Edwards and 18-year-old Jordan Blackwell at Blackwell’s home on Coopertown Road and married couple Ferral and Sheila Burage at their home on East Lincoln Road.

Several times Sunday, the jury heard testimony of an event, and then were shown footage of the event on a 70-inch screen on the wall of the Pike County circuit courtroom.

McComb Police Chief Damian Gatlin took the stand. When the murders took place in 2017, Gatlin was an investigator with the Lincoln County Sheriff’s Office, a member of the SWAT team and a friend of deputy Durr. He also knew the other victims, some better than others. Talking about Jordan and Austin caused the lawman to choke back tears.

He said he had been called to the double-wide trailer on Lee Drive, arriving at almost 1 a.m. May 28, 2017. He and other officers believed Godbolt was still inside, he said.

Soon after he and others learned Godbolt was at Coopertown Road, and then later he was at East Lincoln Road at the Burage home. When Gatlin arrived Godbolt was on the ground in handcuffs and asked to talk to Gatlin. He wanted to trade information — he said lives could be saved if Gatlin would “get this fool off my legs,’” he said Godbolt told him. Gatlin read the defendant his rights, but then learned there were no survivors of the eight-hour shooting spree.

Jurors saw and heard video of Godbolt’s conversation with Gatlin, taped by a newspaper reporter who was on the scene.

Other testimony was just heard.

Lincoln County Sheriff’s deputy Chuck Francis testified Godbolt spoke to him about Durr while he was handcuffed and waiting.

“If the deputy had family, let them know I’m sorry. He was not part of my plan,” Godbolt told Francis.

Chief State Medical Examiner Mark LeVaughn testified he completed the autopsies on Toccara May and Ferral Burage. Both were killed by multiple gunshot wounds. Burage was shot 12 times, May nine times.

Odreeana May, 17, was at her aunt Sheila May Burage’s home on East Lincoln Road when the then-15-year-old heard someone knock at the door. She recalled the conversation she heard.

“Who is it?” her uncle Ferral Burage asked.

“Me,” came the voice from the garage, behind the door.

“Who is me?” Burage asked again.

It was then she heard shooting and she and her aunt Shonda May scattered to hide. Odreeana squeezed behind the dining room table and listened to Godbolt go to the master bathroom where Sheila Burage’s body was later found.

Odreeana said he walked into the kitchen and she heard him get something out of the refrigerator, drink it and toss the bottle into the sink. She identified the Sunny D plastic bottle of orange drink in the sink in one of the crime scene photos she was shown.