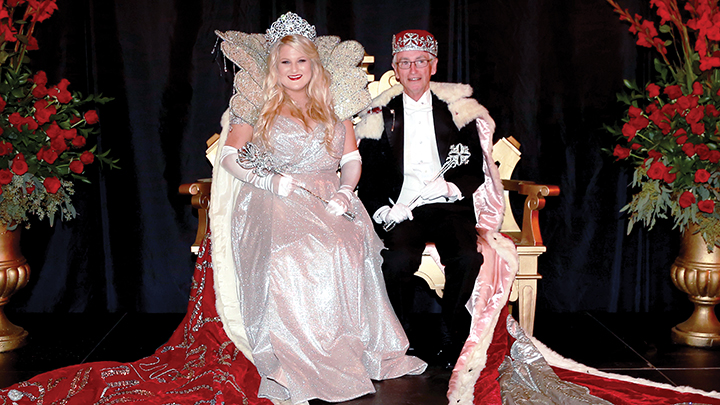 The Krewe of Ceres presented its king and queen Saturday at the Krewe’s annual ball, along with their court.

Paul Phillips was chosen as king, and Whitney Moak was selected as this year’s queen.

Phillips is a native of Ireland, who was adopted at just a few months old by Ray and Evelyn Phillips of Brookhaven.

Ray Phillips and his brothers founded Phillips Brothers Lumber Company, and it was there that the younger Phillips worked after graduating from the University of Southern Mississippi with a business administration degree. He worked for the company for 33 years, including 25 years as president.

Phillips’ wife, Ellie, reigned as Krewe queen in 1986, and his daughter Maggie was crowned queen in 2011.

Moak, daughter of Dr. and Mrs. Edward Sidney Moak Sr., is a native of Brookhaven.

A senior at the University of Mississippi, Moak is pursuing a degree in exercise science, with minors in psychology, mathematics and biology. She is planning for a career in physical therapy.

The recipient of multiple scholarships and awards, Moak is involved in multiple efforts to raise awareness and funds for such groups as the Children’s Miracle Network hospitals, Special Olympics, Make-A-Wish and St. Jude Children’s Research Hospital. Moak has studied abroad in Africa and will serve this summer as an intern in the office of U.S. Sen. Cindy Hyde-Smith in Washington, D.C.

Moak’s grandfather, Joe Moak Sr., was Krewe king in 1971, her cousin Anna Moak was queen in 2008, and several other family members have held positions of honor in the Krewe of Ceres and its charity balls.

More complete bios of the king and queen, and photos will run in the next Lifestyles section of The Daily Leader.