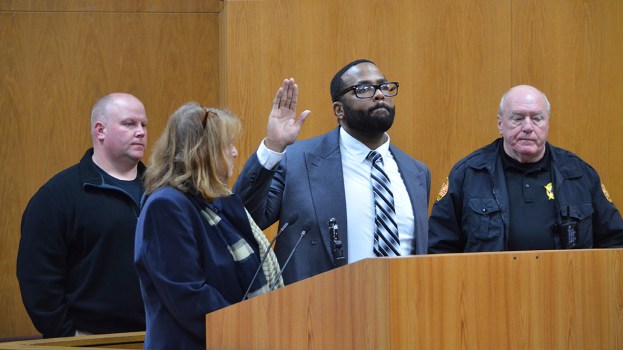 Photo by Donna Campbell/The Daily Leader Defendant Cory Godbolt is sworn in before telling the court he did not want to testify on his own behalf in his capital murder trial Monday, Day 9 of testimony in the Pike County Courthouse. Pictured are, from left: Master Sgt. Keith Dickerson with the Lincoln County Sheriff's Office, defense attorney Alison Steiner, Godbolt and Lincoln County Jail Warden Randy Pickett. 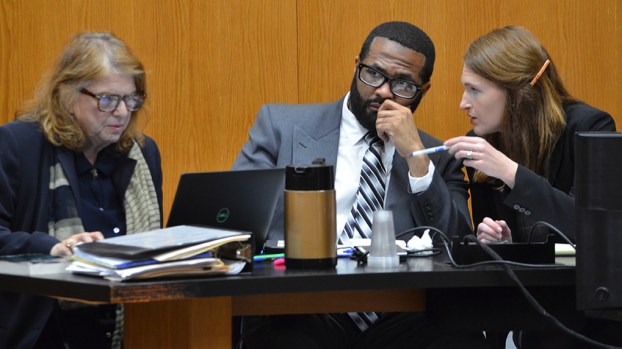 Jurors in the capital murder trial of Cory Godbolt Monday heard nearly an hour of instructions they’ll need before deliberating today on the guilt or innocence of the defendant.

But first they’ll hear closing statements from the prosecution and the defense.

The DeSoto County jurors have heard eight days of testimony from about four dozen witnesses including Godbolt’s estranged wife, who filed for divorce in Copiah County and is waiting for it to become final, and his daughter, 12-year-old My’Khyiah “Bubble” Godbolt. They’ve been shown more than 400 pieces of evidence including crime scene and autopsy photos, autopsy reports, bullets, casings, fragments and at least three weapons — a .40 Smith and Wesson pistol, a Serbian 7.62×39 AK-47 and a .300 Blackout AR-15 — that were recovered at the third location of the fatal shootings that occurred May 27-28 in 2017 in Lincoln County.

Godbolt is charged with four counts of capital murder in the deaths of Lincoln County Sheriff’s deputy William Durr, Austin Edwards, Jordan Blackwell and Sheila Burage; four counts of murder in the deaths of Brenda May, Toccara May, Barbara Mitchell and Ferral Burage; one count of attempted murder on deputy Timothy Kees who arrived at the Lee Drive address and testified he exchanged gunfire with the defendant; two counts of kidnapping — LaPeatra Stafford, who was forced to take Godbolt to Coopertown Road, and Xavier Lilly, who was forced to take Godbolt to East Lincoln Road — and one count of armed robbery for taking a car at gunpoint from Alfred Bracey and Henry Bracey, which was the personal property of Wykeshia Johnson.

The state rested early Monday in Circuit Judge David Strong’s courtroom in the Pike County Courthouse in Magnolia after hearing from just one witness, Lisa Funtes, former deputy state medical examiner for the Mississippi Crime Lab. Funtes performed the autopsies on Barbara Mitchell, Austin Edwards and Sheila Burage and testified to their injuries.

All died from multiple gunshot wounds, she said, pointing to the many wounds on photos that were shown to the jury on a large screen TV on the front wall. At least two jurors wiped away tears as they viewed the photos of 11-year-old Austin, who’d been shot multiple times causing massive damage to his organs in his torso and abdomen. Mitchell had been shot in the head and other areas of her body. Burage was shot twice in the head as she hid in a bathroom closet, testimony showed.

Holloway testified that he and Smith were providing security at the Lee Drive address and he had written in a report that he saw a figure in the treeline of the woods leaving the property at a brick house near the mobile home that was the scene of the first four fatal shootings. Soon after the incident, he reported he believed the figure to be the defendant, having seen Godbolt later at the East Lincoln Road arrest. However, on cross-examination by prosecutors, Holloway said it could have been the deputy he had been told was also in the area near that house.

Godbolt spoke Monday for the first time in the guilt phase of the trial, standing with his attorney Alison Steiner at the podium — while the jury was out — to tell Strong he chose not to testify on his own behalf.

A few hours later, just before the jury was to be brought in to hear their instructions, Steiner addressed the court at Godbolt’s request and said the defendant wanted to place on record “that he reconsidered his decision not to testify and wishes to have the matter reopened for the purpose of him testifying.”

Strong told Steiner the defendant had two years to think about that decision and chose not to testify and denied Godbolt’s request.