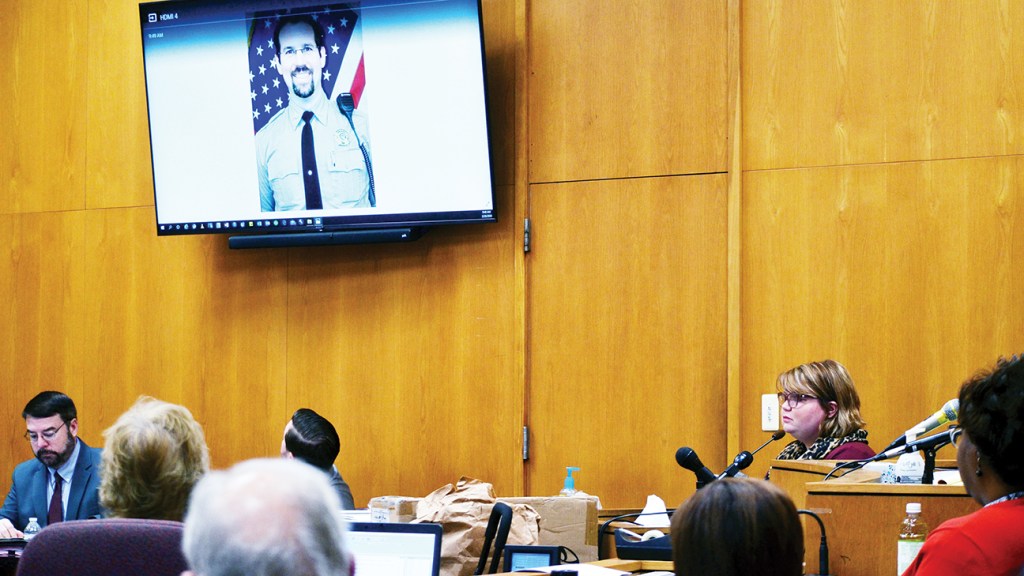 Photos by Donna Campbell Tressie Hall Durr, widow of slain Lincoln County Sheriff’s deputy William Durr, talks about the impact his murder has made on his family’s lives. Durr was one of several people called by prosecutors to give their testimonies in the sentencing phase of the capital murder trial of Cory Godbolt Wednesday on Day 11 at the Pike County Courthouse in Magnolia.

A jury of two men and 10 women today will choose between life in prison or a death penalty for a Bogue Chitto man convicted of killing a Lincoln County Sheriff’s deputy answering a domestic dispute call, two cousins at home playing video games and a woman hiding in her bathroom closet trying to escape a killer who shot his way into her home.

Cory Godbolt is also convicted of killing four other people on May 27-28 in 2017, attempting to kill another deputy, kidnapping two people and committing armed robbery by stealing a car at gunpoint.

The capital murder trial that began with jury selection in DeSoto County Feb. 10 then moved into the guilt phase Feb. 15 at the Pike County Courthouse in Magnolia is in the second day of the sentencing phase.

Tressie Hall Durr was the first to take the stand spoke about her late husband as a family man, who used his talents as a ventriloquist for various ministry outreach through Moaks Creek Baptist Church, where the couple worshiped.

Married for three and half years, they spent every other week with Nash, William Durr’s son from a previous marriage. Nash was 11 years old when his father was murdered.

“In an attempt to try to take the role of a father-figure, I’ve had to learn to do a lot of boy stuff,” she said. “It’s not the same for Nash when his step-mom is trying to take on the role of his father.”

She said her stepson has been forced to continue his life without his father and has experienced several firsts he had expected to share with his dad like shooting his first deer or joining the archery team at school.

Durr said Nash told her recently that realizes he won’t have his father there at his high school graduation or his college graduation.

“He won’t be there to watch me grow into a man,” he told her.

Durr was followed by her mother-in-law, Debbie Durr, who spoke of a loving son who called her every morning at the beginning of his shift and who drove past her house and his sister Megan’s house every day to make sure they were safe.

“We buried William on a Thursday. Megan was getting married on Saturday. He was walking her down the aisle. He was going to give her away. And he was going to perform the ceremony. And my husband had died in 2013 so he was even going to do the father-daughter dance,” she said, breaking into tears. “William was our protector.”

The family of 11-year-old Austin Edwards and 18-year-old Jordan Blackwell shared memories of two cousins who loved each other like brothers.

“Jordan was a protector for all of us,” she said.

When Godbolt killed Jordan Blackwell, who was his cousin, the teenager was about to head into his senior year at Brookhaven High School and had three football scholarships to college and he’d already visited a few.

His father, Shon Blackwell, said Jordan told him he planned to go somewhere away from home.

Two years after the death of his son and his nephew he treated like a son, Shon Blackwell can smile again even through the hurt, but it’s difficult to keep a brave face with so much pain.

Shayla Edwards talked about her son Austin who was much more mature than his 11 years. He was the life of the party who learned to cook with his grandmother, Cora Edwards. He was a dancer who brought smiles to his mother. Those smiles have been replaced by tears, she said.

Austin’s older brother and younger sister were both in the Blackwell home on Coopertown Road when Austin was shot dead.

Edwards said the three of them stayed with her parents for a month after the shooting.

“It’s different. The house is different. It’s not a home anymore because my children aren’t the same,” she said.

Several others spoke about the losses they’ve felt since the deaths of their loved ones —Cora Edwards talked about her grandsons, Myrtis May talked about her daughter Sheila Burage and her son-in-law Ferral and Christianna May Kelly shared thoughts about her mother, Sheila.

Godbolt’s attorney, Katherine Poor, in a speech designed to sway the jury to opt for life in prison for her client rather than death, talked about Godbolt’s childhood, bringing his first-grade teacher to the stand to testify that the man who would later shoot to death eight people was a good child who got held back in school a few times.

Godbolt was a seventh-grade dropout and a bullied kid who became a teenager who bullied others, the jury learned through testimony.

“Cory is more than what he did on Memorial Day Weekend in 2017,” Poor said.

She painted him as a protector, who would do anything for anybody, who loved Bogue Chitto and loved his family. She called him a young man who grew up without a father, but his own siblings testified that their father was only a phone call away and lived within walking distance.

The defense expects to call an expert witness to the stand today, a specialist in psychological trauma who evaluated Godbolt late last year.