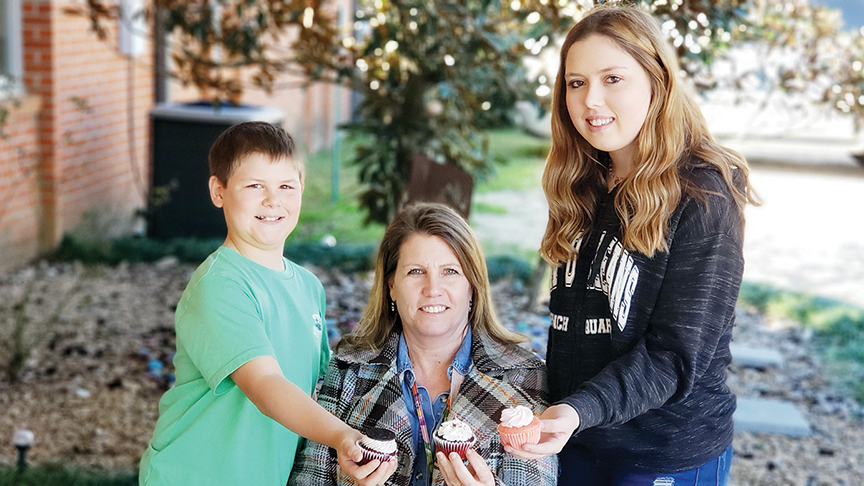 Photo by Donna Campbell Leapers around the world are celebrating the actual day of their birth today. Three with Leap Day birthdays at Loyd Star Attendance Center are, from left: Gage Rippy, Mary Case and Elaina Ricks.

But today — for the first time in four years — these “leapers” get to party on the actual anniversary of their births.

Ricks and Rippy are students at Loyd Star Attendance Center. Case teaches third grade there. The school isn’t the only thing they have in common, though. All three have Leap Day birthdays.

Rusti Rippy was adamant about not having her son, Gage, on Feb. 29 in 2012. She even told Dr. Richard Rushing, her OBGYN, she was due a week later and didn’t plan to have her baby until then.

Gage had other plans and entered the world at 8:16 p.m. He turns 8 today, but it’s only his second birthday.

His mother marked the occasion Friday at school with cupcakes. His had a No. 2 candle on it.

He’ll spend his birthday working cows, one of his favorite pastimes.

“He’ll be spending his birthday doing what he loves, playing with his cows,” she said.

Then they’ll head to one of his favorite restaurants for nachos, tacos and a sombrero birthday song.

Ricks will make 16 this birthday, but it’s only the fourth time she’ll celebrate on her actual birth day.

To mark the occasion of the occasional date, they’re heading to Baton Rouge. Ricks has her heart set on a belly button piecing and her dad said it’s OK.

She said she’ll spend the day with family “doing really cool stuff” and hopefully end it with white cake with vanilla frosting.

Case has partied for her birthday every year, even when Feb. 29 was missing from her calendar.

“I celebrated every year, I just didn’t have a day,” she said.

Being a Leap Day baby has its ups and downs.

Rusti Rippy said it’s sometimes difficult to register her son online for things because not all computers recognize Feb. 29 as a day. Case has had the same problem before.

“You just deal with it,” she said.

One of the good things is the notoriety that comes from having a unique birthday.

“It’s what kids remember about me,” the school teacher said. “They might not remember anything about my class, but they’ll remember ‘Oh yea, you’re that one that’s only 12,’ and that stuck with them. Nothing else may have stuck with them, but the fact that I only had a birthday every four years did.”

“When you’re younger, you don’t really like it, but when you get about 50, 13 sounds pretty good,” she said.