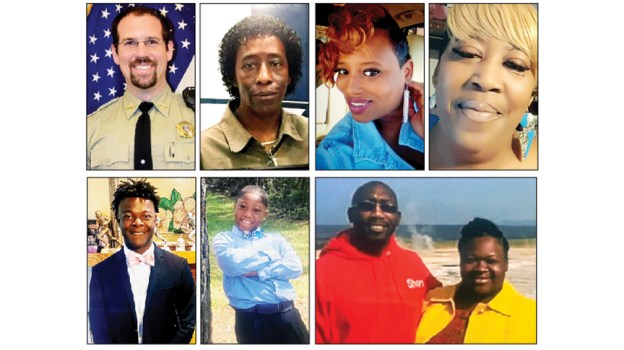 Photos submitted Pictured are the victims of the May 2017 shootings in and around Bogue Chitto are, top row from left: Deputy William Durr, Brenda May, Toccara May and Barbara Mitchell; bottom row, from left: Jordan Blackwell, Austin Edwards and Ferral and Shelia Burrage. 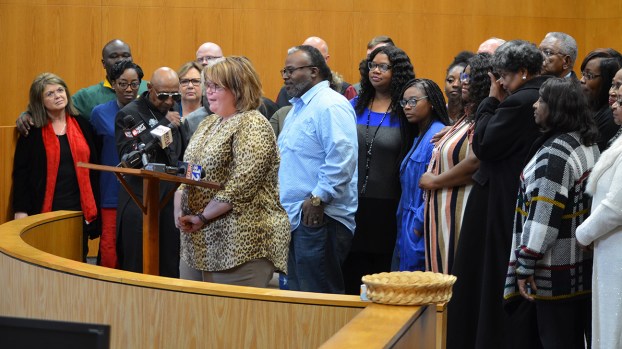 It took about as much time for a jury to choose death for a man who took the lives of eight people as it did for the judge to read them their instructions.

An hour after leaving the quiet courtroom in Magnolia, not 30 minutes away from Bogue Chitto, the jury of 10 women and two men came back with their decision.

They walked past the packed pews of family of the victim and the accused — in many cases they were both — and along a wall of media professionals waiting to capture the moment that took 33 months to get to.

Two of the female jurors held hands, comforting each other as they walked to their seats. Others held tissues.

Choosing death for someone is likely not an easy task and one they apparently did not take likely.

For the Bogue Chitto Eight — Deputy William Durr, Brenda May, Toccara May, Barbara Mitchell, Jordan Blackwell, Austin Edwards and Ferral and Sheila Burage — justice was served Thursday when the sentence was read.

Cory Godbolt, 37, will serve out the remainder of his days on death row in the Mississippi State Penitentiary in Parchman. His execution — likely by lethal injection — is set for July 15, but at least one appeal is automatic. Others will likely follow.

But still, those who survived Godbolt’s eight-hour rampage May 27 and 28 in 2017 feel like they already have closure.

“It’s been a long time coming,” Shon Blackwell said, standing at the same podium Godbolt stood at hours earlier when he begged the jury for a lesser punishment than they unanimously felt he deserved.

Blackwell has prayed for the killer’s salvation. Godbolt was his cousin and attended New Zion Union M.B. Church, where Blackwell and his father-in-law, Eugene Edwards, preached.

“It’s a loss and a victory at the same time,” he said.

He said the family of the victims has grown closer than they ever were before.

“We’ve been crying with one another, despite how we look, what color we are, how tall we are. We’ve been praying to the same God,” he said. “We will keep praying…We’re here to pray with you guys or for you guys, whenever you need us. You need somebody to cry with, I’m sure we’ve got some tears for you. You need somebody to pray with, we’ve definitely got prayer with you. Just keep us in your heart.”

Tressie Hall Durr hugged her way to the front of the group.

“My husband, deputy Donald William Durr, died a hero,” she said. “He died knowing that his place on this earth was to show God’s love to others and I think he did an excellent job at that.”

She and her stepson Nash want Durr’s legacy of love for others to live on.

“When he took his last breath, I now know that he was grasping his wedding ring. That tells you, in itself, how much he valued his family,” she said. “There’s too much hatred in the world right now. That’s not what William would want. He would want me to show love.”

Six of the eight murders occurred in Bogue Chitto. Four people, including Durr, died on Lee Drive. The young boys were killed on Coopertown Road. The Burages died at their home on East Lincoln Road, not in Bogue Chitto, but not too far away.

Someone in the throng of media — lined up behind the empty jury box that had been a home-away-from-home for the DeSoto County jurors for 12 days of testimony and arguments — asked the family of the victims, “What’s next?”

She believes her son is dancing in heaven and clowning with his older cousin.

Christianna May Kelly, daughter of Sheila and Ferral Burage, broke down in tears as soon as she mentioned her mother and the stepfather who loved her as his own.

“My mama was a strong woman in God. I know that she’s in heaven and my daddy’s in heaven,” she said. “They’re both gone, but it couldn’t have been any other way because they couldn’t have lived without each other. I just miss them so much.”

Kelly summed up the thoughts of the group.

“We can sleep better knowing that we got justice for our family,” she said.